OHL Announces Firebirds’ Luke Cavallin as Goaltender of the Month 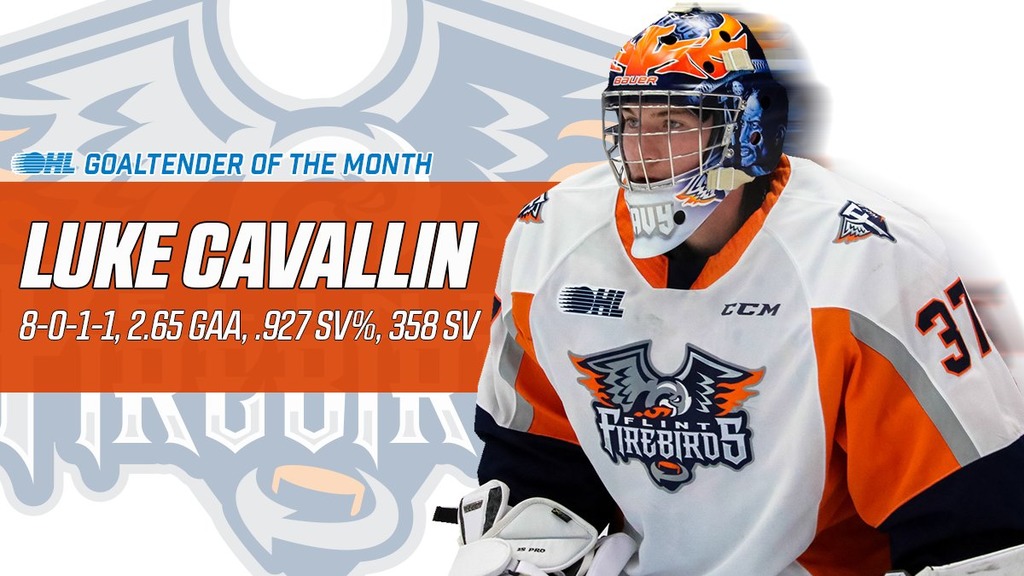 Flint, Mich. – Flint Firebirds netminder Luke Cavallin is the OHL Goaltender of the Month for February, going undefeated in regulation with an 8-0-1-1 record, 2.65 goals-against average and .927 save percentage in 11 games.

Cavallin backstopped the Firebirds to the top of the Western Conference standings, making 358 saves over the course of the month. He opened February with a 35-save performance in Saginaw as the Firebirds prevailed 7-1 on Feb. 2nd. He was brilliant on Feb. 12th in Erie, turning aside 38 shots in a 5-1 Flint victory. Cavallin backstopped the Firebirds to a point in Sault Ste. Marie on Feb. 16th, stopping 43 of 44 in a 2-1 shootout loss. He turned aside a career-high 51 shots on Feb. 19th at home to Windsor, helping the Firebirds beat the Spitfires 3-2 in a shootout. Cavallin stopped all 34 shots he faced on Feb. 25th in Sarnia as the Firebirds won by a score of 6-0. He’s the first Firebirds netminder to ever win OHL Goaltender of the Month honors and the first in franchise history to do so since Alex Nedeljkovic of the Plymouth Whalers in February 2013.

The First-Place Firebirds begin a four-game road trip starting this weekend with three-straight games: Friday and Saturday night at 7:00 p.m. (ET) in Erie to take on the Otters, and Sunday at 4:00 p.m. (ET) to take on the Guelph Storm. The ‘Birds next home game is Saturday, March 12, also against the storm, at 7:00. It will be Teacher Appreciation Night sponsored by PFCU. Complimentary tickets will be available to all Educational Professionals with valid school ID work badges at the Dort Financial Center office. Tickets are on sale NOW here: ETIX.