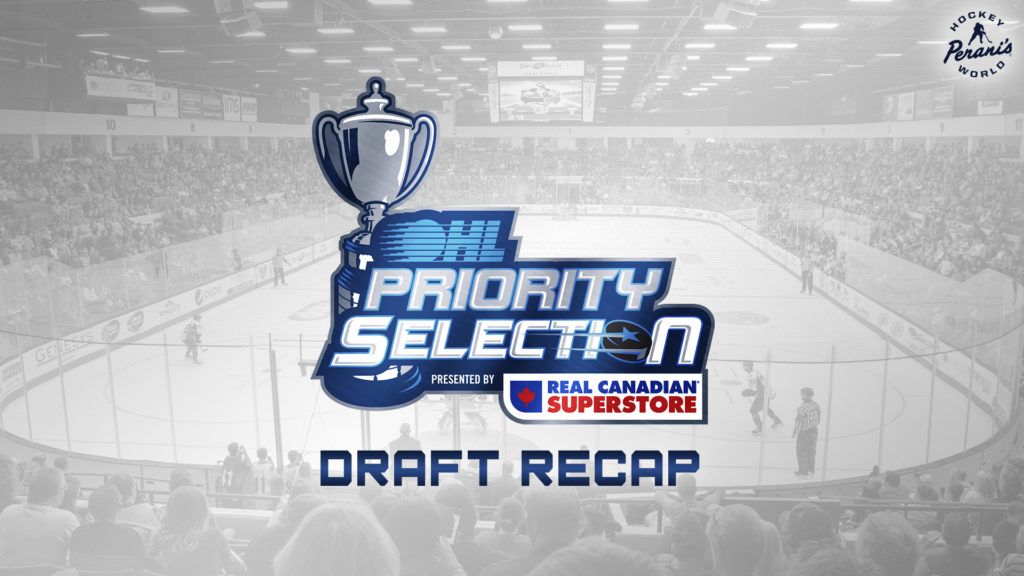 The Firebirds set six franchise-records this year after recording the most points in a season (82), most wins (40), most home wins (20), most road wins (20), most goals for (274) and longest winning-streak (15 consecutive games), which was the second-longest in the OHL last season by five games.

Of the 14 new faces added to the Firebirds’ organization, the club selected six forwards, seven defenseman and one goaltender.

The Firebirds selected nine Canadians and five Americans, including four players from the Detroit Compuware AAA Hockey Club, a record amount of players selected in one draft from one youth organization by the Firebirds.

“We are thrilled to welcome 14 new families to the Flint Firebirds organization,” said Flint Firebirds Vice President of Hockey Operations & General Manager Barclay Branch. “We felt like this was one of the most successful drafts we’ve had as a club to date. Each player we selected can become a Firebird in the near future and want to be Firebirds. We look forward to introducing our great hockey community to our newest selections in the future.”

For the first time in franchise history, the Firebirds selected an American, when the club chose Michigan-born forward Gavin Hayes. Hayes hails from Westland, Mich., which is one-hour south of Flint. 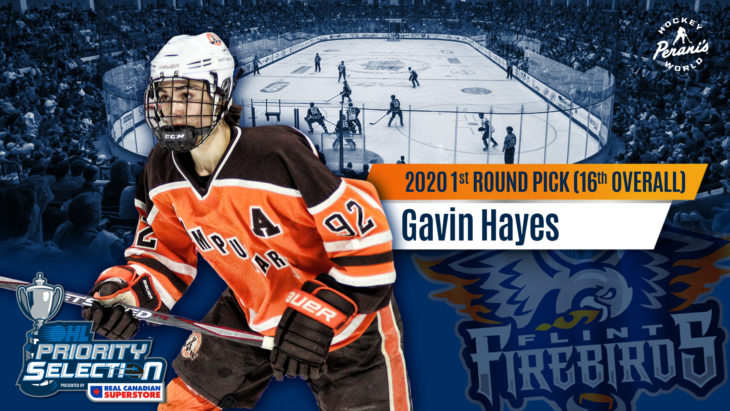 Hayes led the prestigious High-Performance Hockey League (HPHL) in both goals (16) and points (33) in just 21 league games with the Detroit Compuware U15 AAA hockey team this year. The 6-foot-1, 160-pound forward placed third among more than 630 players at the U15 World Selects Invitational in Philadelphia, Penn. last June, recording 16 points (6G, 10A) in just nine games with Team East Coast Selects. In July, he was selected among the best American-born hockey players to compete at the renowned 2019 USA Hockey Boys Select 15 Player Development Camp in Amherst, New York. Hayes was tabbed as an assistant captain for the last two consecutive years with Compuware. He also tallied an impressive nine points in five games at the 2019 Chipotle-USA Hockey Youth Tier I 14U National Championships in Pittsburgh, Penn. 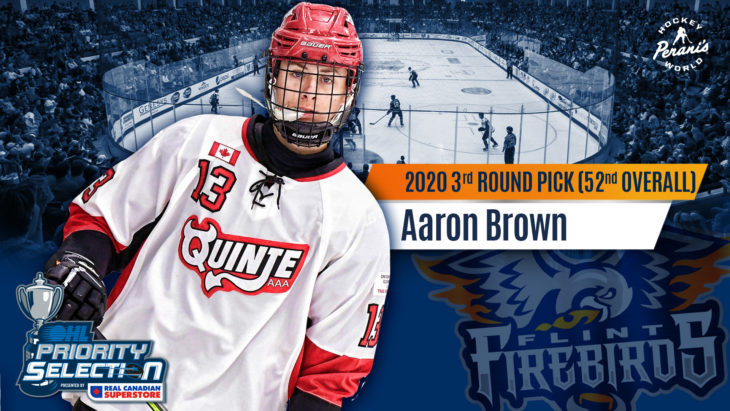 Flint then selected left defenseman Aaron Brown in the third-round, 52nd overall. The Belleville, Ont. native played his youth hockey for the Quinte Red Devils AAA Hockey Team in the Ontario Minor Hockey Association-Eastern Toronto Area (OMHA-ETA). Brown played an integral role in leading the Red Devils to back-to-back OMHA championships, including a top-four finish in three of the major four tournaments, while also placing among the top three defenders in points in three of the top four major tournaments this past season at the Minor Midget level. A 6-foot-1, 170-pound blue liner, Brown recorded 49 points (14G, 35A) including 40 penalty minutes in 67 games with the Red Devils last season. Brown was awarded as an honor roll student and was also tabbed as “Athlete of the Year” at Eastside Secondary School in Belleville. 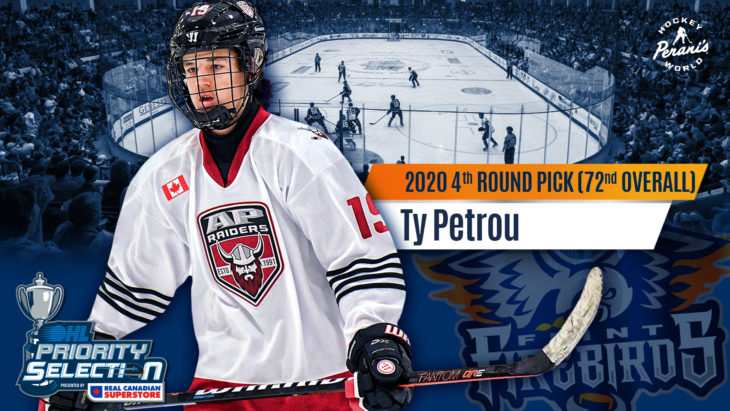 In the fourth round, the Firebirds tabbed forward Ty Petrou (pronounced petch-roo) 72nd overall. Petrou recorded 34 points (14G, 20A) in 35 games this past season with the Ajax/Pickering Raiders (OMHA-ETA). The 5-foot-11, 164-pound native of Pickering, Ont. finished second-overall in points in the regular season back-to-back years in the OMHA-ETA. Petrou was also tabbed as an assistant captain for the past two consecutive years with the Raiders. 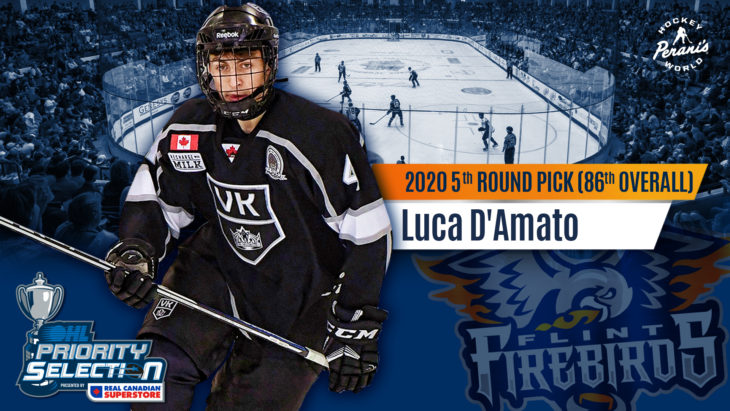 Right-handed shot defenseman Luca D’Amato (pronounced Duh-matt-oh) was selected in the fifth-round, 86th overall.  D’Amato, a 5-foot-8, 141-pound defender recorded 24 points (10G, 14A) in 36 games played with the Vaughan Kings AAA Hockey Club en-route to leading the Kings as finalists in the Greater Toronto Hockey League (GTHL). The Maple, Ont. native was voted as an assistant captain during the 2018-19 campaign. 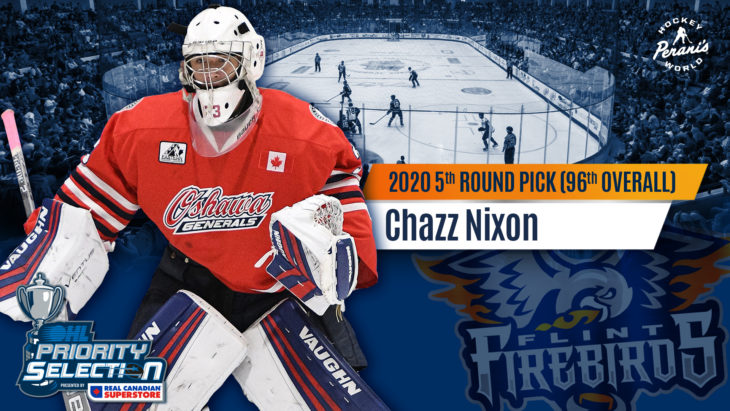 Chazz Nixon was the lone goaltender selected by the Firebirds in the 2020 OHL Priority Selection. Nixon, a native of Oshawa, Ont., was also the first player selected out of the Oshawa Minor Generals organization in the Firebirds six-year history at the OHL Draft. Coming in at 6-foot-1, 180 pounds, Nixon finished second among all goaltenders in the OMHA-ETA after posting an impressive 1.99 goals against average (GAA) through 20 games in the with the Generals. He was also a co-winner of the ‘Dutchy Turner Award’ in 2016 and 2018, which is presented to the Oshawa Minor Generals goaltender duo with the lowest GAA. 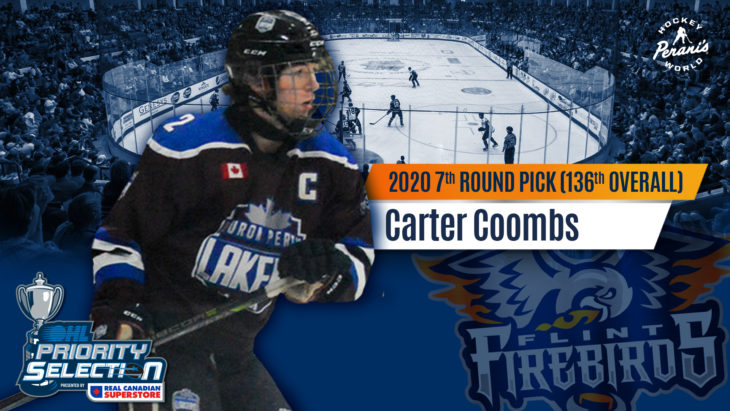 Coombs has been named the captain of the Huron Perth Lakers in the Minor Hockey Alliance of Ontario (MHAO) for the last three consecutive years and was selected to participate in the MHAO All-Star game for the last two years. A five-foot-eight, 155-pound forward from Listowel, Ont., Coombs recorded 57 points (27G, 30A) in 48 games with Huron Perth last season. 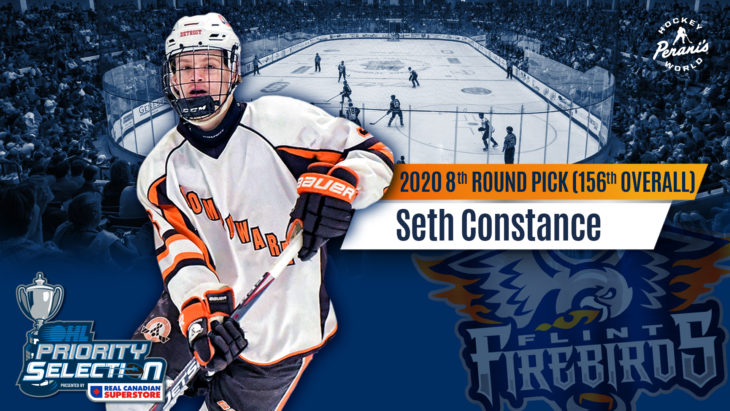 Constance was the second of four players selected out of the Detroit Compuware AAA Hockey Club by the Firebirds in this year’s OHL Priority Selection. A native of Northville, Mich., Constance is a 6-foot-1, 163-pound right-handed shot defenseman and was selected in the eigth-round, 156th overall by the Firebirds. 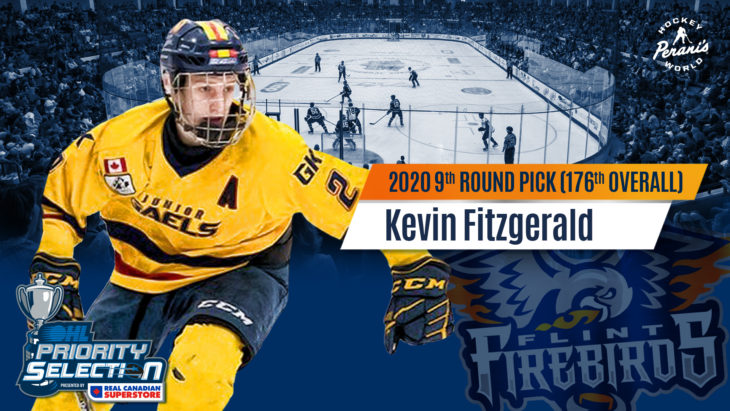 Flint then selected defenseman Kevin Fitzgerald in the ninth-round, 176th overall. A native of Bath, Ont, Fitzgerald held the most points on his team among all defenseman with 36 points (6G, 30A) in 57 games, including a team-high plus-27 rating with the Kingston Jr. Gaels in the OMHA-ETA last season. 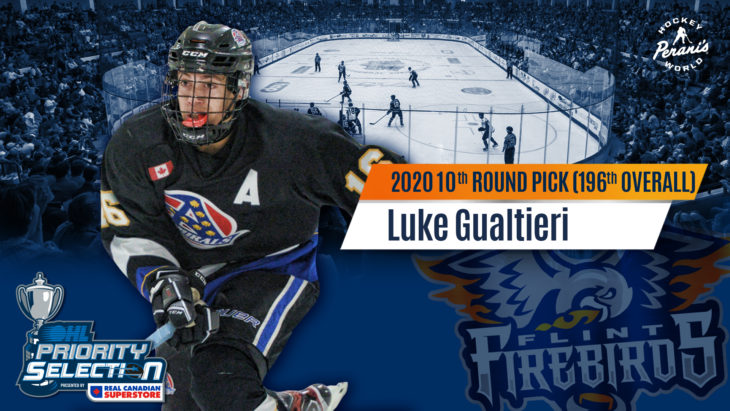 Defenseman Gualtieri (pronounced Gwal-terry) was selected by the Firebirds in the 10th-round, 196th overall. The 5-foot-10, 165-pound blue liner played an integral role in leading the Southern Tier Admirals as league champions in the Ontario Minor Hockey Association-South Central Triple-A (OMHA-SCTA). The St. Catharines, Ont. was tied for the OMHA-SCTA league lead in points among defenseman with 40 points (11G, 29A) in 50 games played with Southern Tier this past season. 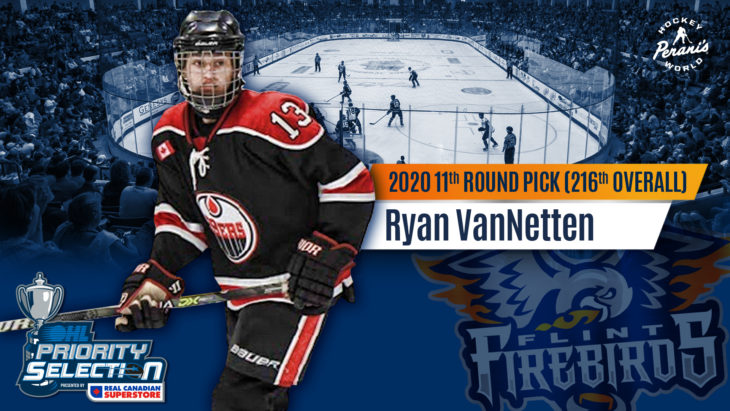 VanNetten was selected by the Firebirds in the 11th-round, 216th overall, out of the Brantford 99ers (MHAO). The 5-foot-9, 141-pound right-handed shot defenseman was tied for the league-lead in points among defense in the MHAO a season ago and recorded the most goals among defense in the 2019-20 postseason. A native of Simcoe, Ont. and a three-time MHAO all-star, VanNetten recorded 42 points (8G, 34A) in 45 games last season with Brantford. 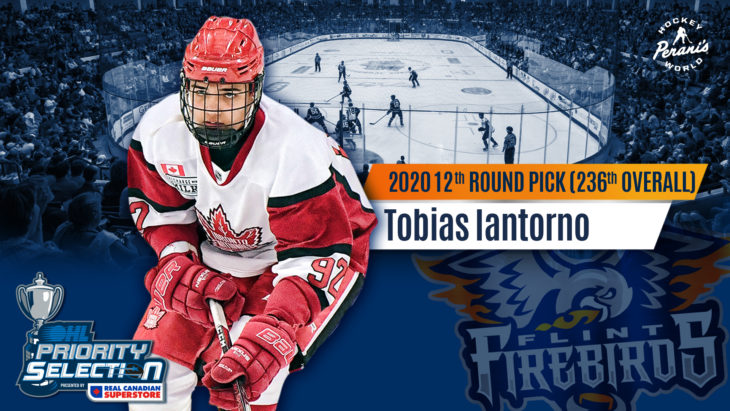 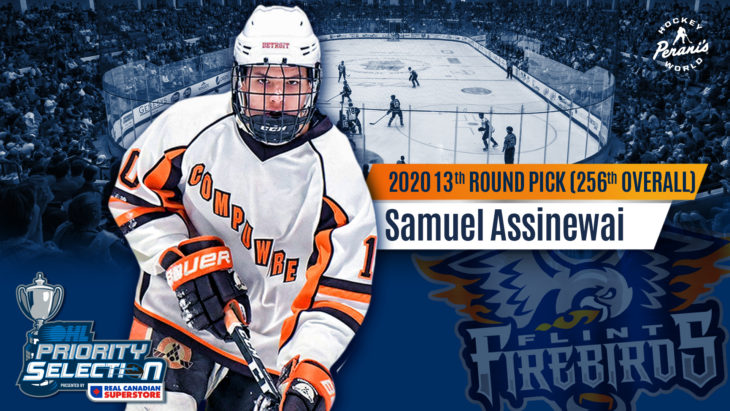 Samuel Assinewai (pronounced uh-sin-a-way) was selected by Flint in the 13th-round, 256th overall. A native of Livonia, Mich., Assinewai recorded 15 points (6G, 9A) in 20 league games with the Detroit Compuware AAA Hockey Club in the HPHL. A 5-foot-11, 155-pound forward, Assinewai also competed with Comuware at the 2019 Chipotle-USA Hockey Youth Tier I 14U National Championships in Pittsburgh, Penn. 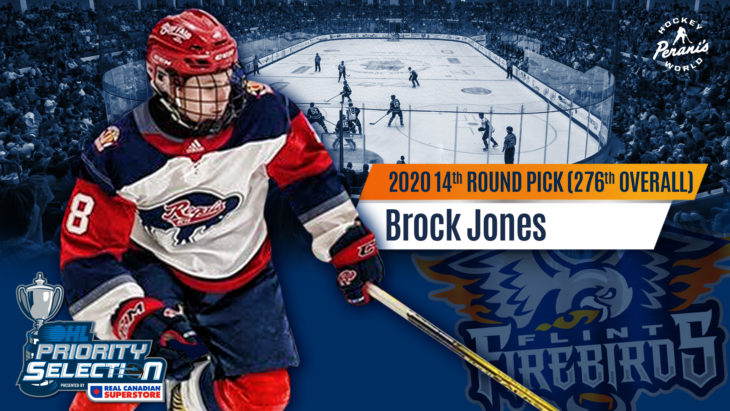 The Firebirds selected Brock Jones in the 14th-round, 276th overall. Jones, a native of Lake View, NY, became the Buffalo Regals all-time franchise leading scorer and second all-time leading scorer after recording 64 points (41G, 23A) in 46 games played with the Regals in the OMHA-SCTA last season. The 5-foot-9, 162-pound forward also led the Regals in points in his bantam major year in the 2018-19 season. 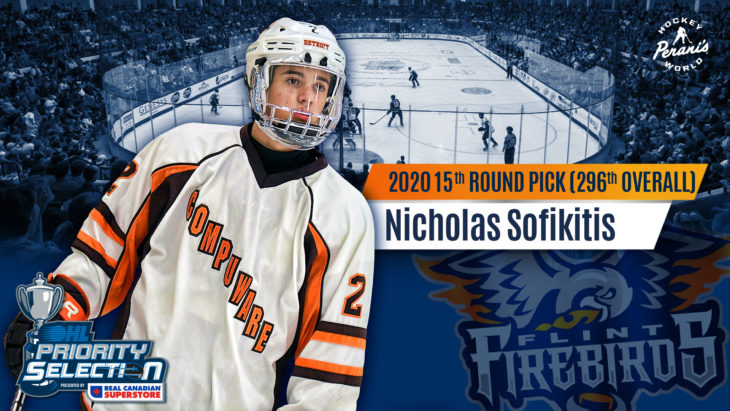 Nicholas Sofikitis was the final selection by the Firebirds in the 15th-round, 296th overall. Sofikitis comes from Birmingham, Mich., and played with the Detroit Compuware U16 AAA Hockey Club last season. A five-foot-10, 155-pound defenseman, Sofikitis was named an assistant captain with Compuware this campaign. A season ago, he was on the Compuware team that won both Silver Sticks Championship and the HPHL Playoffs.