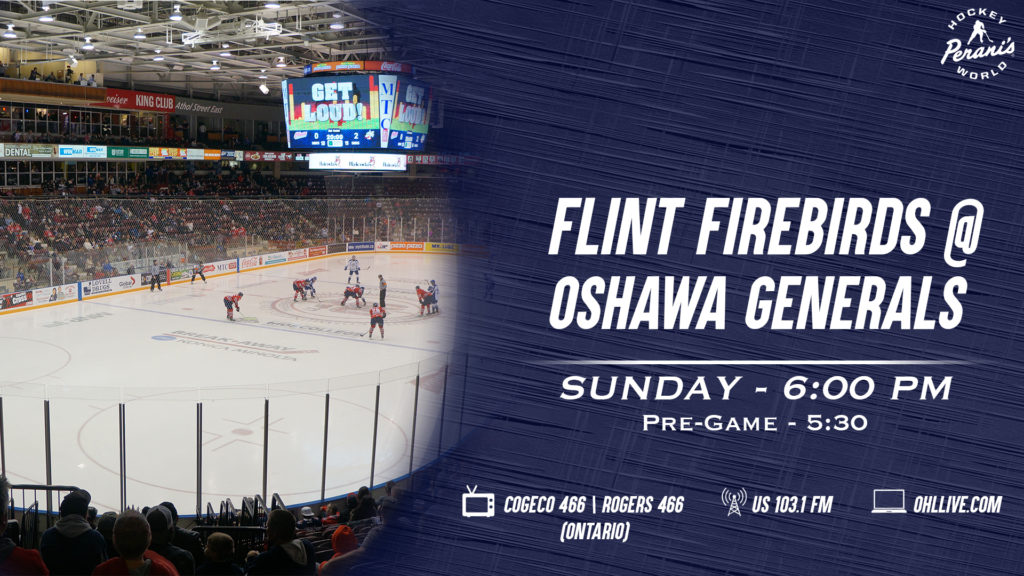 Oshawa, Ont. – The Firebirds wrap-up three road games in three days Sunday when the club faces off against the Oshawa Generals. Puck drop is set for 6:05 p.m. (ET) at the Tribute Communities Centre (capacity 6,125).

Sunday marks the second of two meetings between the two clubs, and the only game in Oshawa. All-time, the ‘Birds hold a record of 3-6-0-0 versus the Gens, and a record of 1-3-0-0 in Oshawa. In the lone meeting this season, Flint posted a 4-3 overtime victory over the Generals on Jan. 3.

Last night, the Firebirds defeated the Hamilton Bulldogs 7 – 3. The victory extended Flint’s overall franchise-best winning streak to nine games, and set a new franchise best road-game winning streak at six games. It also surpassed the club’s record for most away-game wins in a single season at 14. The team is now one victory shy of tying the record for most overall wins in a season, which currently sits at 32.

Of note, six Firebirds have close connections with Oshawa: Ty Dellandrea (Port Perry), Jake Durham (Port Perry), Ethan Keppen (Whitby) and Brennan Othmann (Pickering) hail from the Oshawa region. Flint’s Vice President of Hockey Operations and General Manager Barclay Branch is a native of Oshawa and Flint’s Head Coach Eric Wellwood spent two seasons (2014-16) as an assistant coach with the Generals and was a part of the Memorial Cup Championship team in 2015.

On special teams this season, Flint’s killing penalties at a rate of 81.6% when short-handed, which is 5th-best in the OHL. Oshawa’s penalty-killers are tied for 11th at 79%. With the man-advantage, the Gens rank fourth in the league, converting at a rate of 23.2%, and the Firebirds are 18th, scoring at a 18.6% clip.

Broadcast Coverage:
Sunday evening’s contest in Oshawa can be heard live on the radio throughout Flint & Mid-Michigan on US 103.1 FM, online at www.us103.com or by downloading the US 103 app here. Dominic Hennig will call the play-by-play action on the Flint Firebirds Hockey Radio Network. Pregame coverage will begin 35 minutes prior to puck drop at 5:30 p.m.

All Flint Firebirds home and away games throughout the 2018-19 season can be watched anywhere in the world online on www.ohllive.com or on the OHL Live app. OHL Live is a league video streaming platform that delivers high quality live and on-demand coverage of all regular season and playoff games annually. The cost is $6.99 per game, $69.99 for Flint Firebirds away games only, $179.99 for all 68 home and away Firebirds games and $279.99 for all 1,360 OHL games throughout the 2019-20 season.