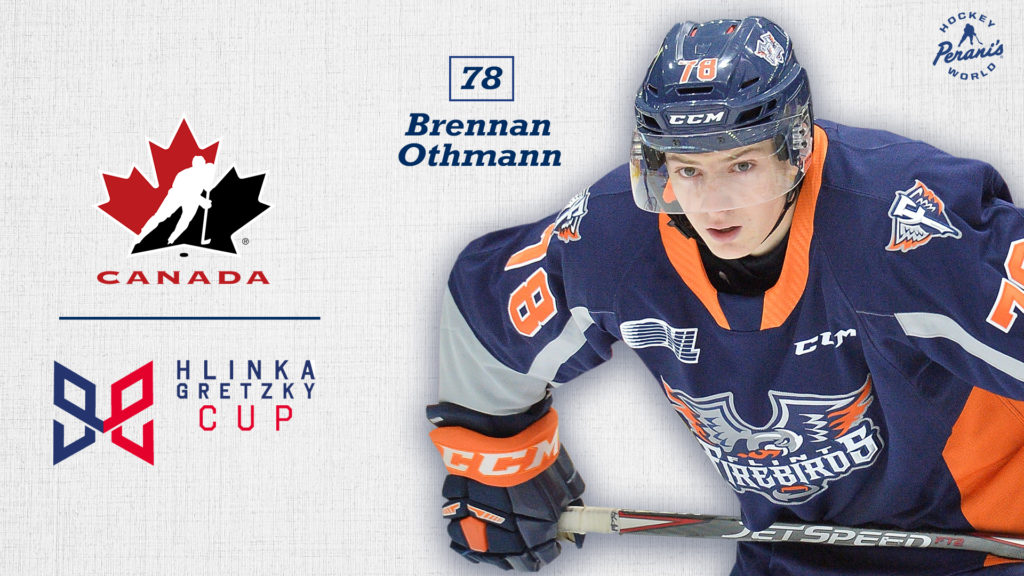 CALGARY, Alta. – Flint Firebirds forward Brennan Othmann is among just 46 of Canada’s top under-18 hockey players, including 13 from the Ontario Hockey League, that have been invited to attend Canada’s National Men’s Summer Under-18 Team selection camp.

“Congratulations to Brennan and his family on being named to Canada’s National Men’s Summer Under-18 Team selection camp,” said Flint Firebirds Vice President of Hockey Operations & General Manager Barclay Branch. “It’s a reflection of Brennan’s hard work and commitment to the game and recognizes him as an elite young talent in his age group.”

Othmann broke the Firebirds rookie franchise records for goals (17) and points (33) in 55 games while also recording two game-winning goals with Flint during the 2019-20 OHL season. The Pickering, Ont., native was selected by the Firebirds with the second-overall pick in the 2019 OHL Priority Selection on Apr. 6. The 5-foot-11, 165-pound forward was among the 66 players selected to represent Canada at the 2019 World Under-17 Hockey Challenge in November. Brennan is a prospect eligible for the 2021 NHL Draft.

“It’s a dream come true as a Canadian hockey player any time you receive a call from Hockey Canada regarding one of their national teams,” said Othmann. “I know there’s still a lot of work to do to make their future national teams and just want to thank the staff at Hockey Canada, my family and the staff in Flint for supporting me along the way.”

Six goaltenders, 14 defensemen and 26 forwards were set to compete for a chance to represent Canada at the 2020 Hlinka Gretzky Cup, which was scheduled for Aug. 3-8 in Edmonton and Red Deer, Alta., before it was cancelled April 28 due to the coronavirus (COVID-19) pandemic.

With the cancellation of the Hlinka Gretzky Cup, focus will now turn to the 2021 IIHF U18 World Championship next spring; a host city has not yet been announced. The Czech Republic and Slovakia will host the 2021 Hlinka Gretzky Cup before it returns to Edmonton and Red Deer in 2022.