Battle of top picks, Othmann vs. Wright Saturday in Flint 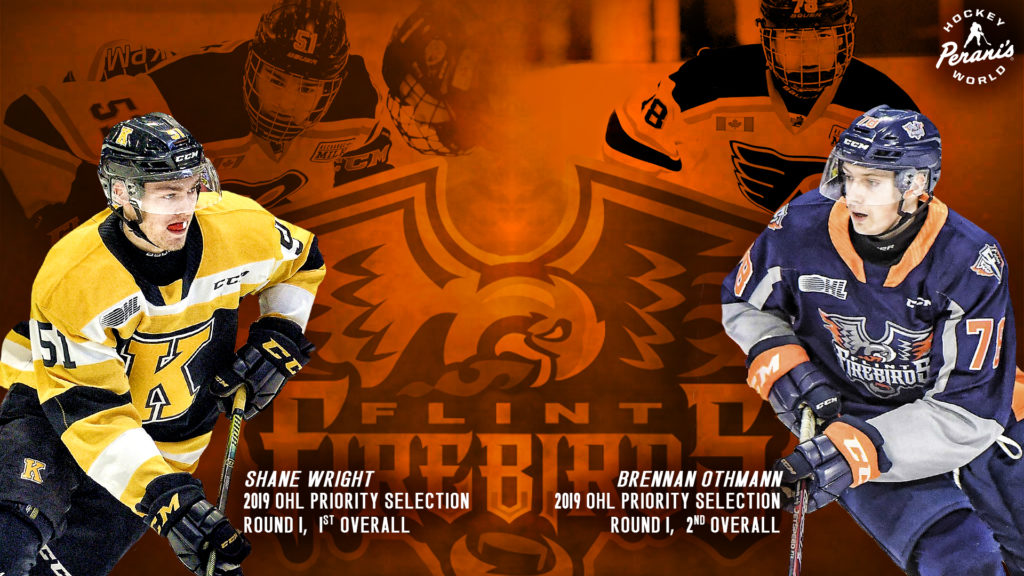 Flint, Mich. – The Firebirds return home to the Dort Federal Credit Union Event Center for a pair of games this weekend. Friday, Flint hosts the Hamilton Bulldogs at 7 p.m. (ET) before facing-off against the Kingston Frontenacs Saturday also at 7 o’clock.

The top two draft picks from the 2019 OHL Priority Selection go toe-to-toe against each other for the first time on the Firebirds’ home-ice Saturday. Brennan Othmann (first-round, 2nd overall) and Shane Wright (first-round, 1st overall) were teammates in youth hockey a year ago with the Don Mills Flyers minor midget AAA hockey team in the Greater Toronto Hockey League (GTHL).

Othmann, a native of Pickering, Ont., recorded a remarkable 146 points (66G, 80A) in 72 regular season games with Don Mills last year. He played an integral role in helping the Flyers to an impressive  77-0-6-1 record, capturing both the Greater Toronto Hockey League’s (GTHL) regular season and playoff titles. Othmann then led Don Mills in the playoffs with 22 points (7G, 14A) in 13 games.

Wright, a native of Burlington, Ont., also scored scored 66 goals and added 84 assists for 150 points in 72 games with the GTHL team. He was granted “exceptional player” status to be selected a year early which has only been done four other times since 2005: John Tavares, Aaron Ekblad, Connor McDavid and Sean Day. Three of the four listed exceptional status players that were picked first-overall in the OHL Priority Selection, went on to be selected first-overall in the NHL Draft.

Saturday is also the Firebirds’ Billet / Host Family Appreciation Night. The Firebirds’ host families will be recognized and honored for their commitment to the organization with a pre-game ceremony and will be provided a beautiful display of bouquets. Bouquet arrangements are courtesy of Bentley Florist and the Bovan Floral Group in Burton. The players come to Flint from all over the world, near and far, from Detroit, Mich., Toronto and Ottawa, Ontario and all the way from the nation of Belarus. Host families provide the Firebirds with with amazing support and accommodations all season long.