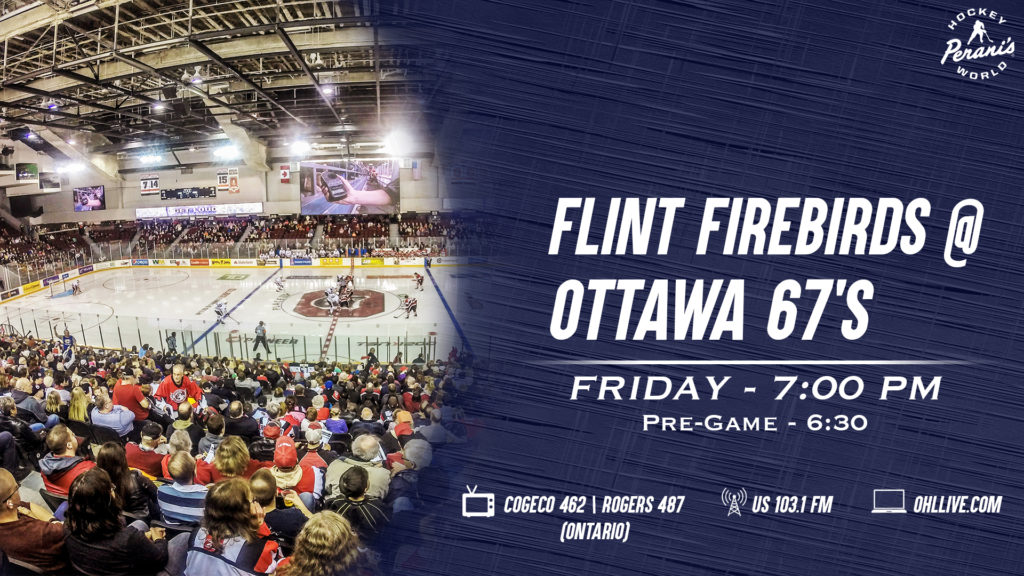 Saturday marks the second of two meetings between the two clubs, and the only contest in Ottawa this season. All-time the Firebirds hold a record of 4-3-1-0 versus the 67’s, and a 1-2-1-0 record in Ottawa. Last season the clubs split the series, with each team winning on their home ice. The 67’s ended the 2019-20 regular season in first place in the 20-team OHL.

The Firebirds enter Friday’s contest in third place in the West Division and sixth in the Western Conference with a record of 22-16-1-0. The 67’s are currently leading the East Division, the Eastern Conference and the league with a record of 31-7-0-0. Flint’s record in away games stands at 8-8-0-0 compared to Ottawa’s home-ice record of 16-3-0-0. In their last ten games the Firebirds have gone 4-5-1-0 and Ottawa is 9-1-0-0 in that span.

Flint Firebirds (22-16-1-0, 3rd West Division):
Belarusian forward Evgeniy Oksentyuk tops the club with 20 goals and 27 assists for 47 points in 34 contests. He currently rides the longest point streak in the OHL and in Firebirds’ franchise history at 16 games (12G, 16A).Ty Dellandrea (Dallas Stars) carries a five-game point-streak (7G, 8A) in OHL play. For the season, he ranks third for Flint with 18 goals and 23 helpers in 29 games.

Defenseman Riley McCourt recently surpassed former Firebird Matt Henderson for most goals scored by a defenseman in a Firebirds’ uniform with 21 pots in the orange and navy blue. McCourt’s 87 total points with Flint are just three-shy of tying the record for all-time points by a Firebirds’ rearguard. For this season, McCourt is second in total offense with 11 goals and a team-high 31 assists for 42 total points in 39 games. His total points are fourth-most among OHL rearguards, his 11 tallies are tied for sixth, and his 31 helpers are fourth.

Between the pipes, Luke Cavallin hails from nearby Ottawa in Kanata, has seven wins in 14 appearances and carries a 3.75 GAA with the ninth-best SAV% at .898. Anthony Popovich has played in 28 games this season. He’s earned 15 victories, which are tied for the fifth-most in OHL. His goals-against average (GAA) is 3.76 and he has the eighth-best save-percentage (SAV%) in the league at .897.

Defenseman Noel Hoefenmeyer (Arizona Coyotes) tops the blue-line unit for Ottawa with 15 goals and 39 assists in 38 games-played. His 54 total points are the most by any defender in the OHL, and his total goals and total assists each rank second in their respective categories. Hoefenmeyer’s 20 power-play helpers are third among all OHL skaters.

Rossi, Keating, Garreffa and Hoefenmeyer join teammate Jack Quinn to earn the top five spots in the league for plus/minus ranking. Quinn’s 30 tallies are the third-most in the OHL.

Between the pipes, Cedric Andree has appeared in 29 games and ranks inside the top three among OHL netminders in several categories. He’s tied for the most wins at 22 and ranks second in shutouts with three this season. His goals-against average (GAA) ranks second at 2.39 and his .918 save-percentage (SAV%) is the third-best. Rookie netminder Will Cranlee has 11 appearances this season, earning nine victories with a .862 SAV% and a 3.60 GAA.

Broadcast Coverage:
Friday evening’s contest against the Ottawa 67’s can be heard live on the radio throughout Flint & Mid-Michigan on US 103.1 FM, online at www.us103.com or by downloading the US 103 app here. Firebirds’ broadcaster Dominic Hennig will call the play-by-play action on the Firebirds Hockey Radio Network. Pregame coverage will begin 30 minutes prior to puck drop at 6:30 p.m.