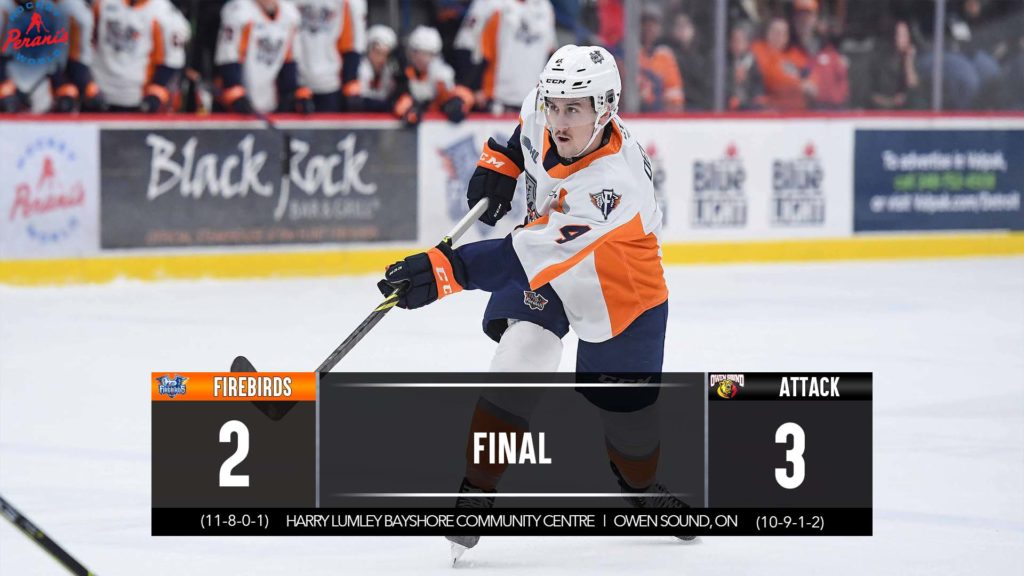 Owen Sound, Ont. – After defeating the Attack on their home ice Saturday evening, Flint played another hard-fought game but came up just short on Sunday. Colby Barlow scored twice for the home team after William Portokalis lit the lamp first in the contest. For the Firebirds, Riley Piercey scored his seventh of the season and extended his point streak to seven games. Coulson Pitre had the other marker for the ‘Birds. Between the pipes, Ian Michelone made his second-consecutive start and stopped 37 of 40 shots faced. Across the ice, Nick Chenard picked up the victory with 32 saves on 34 shots faced.

For the second game in a row, Owen Sound struck twine first. This time it was only 2:40 into the first period. Taos Jordan made the defensive-zone pass to Cedrick Guindon along the left-wing boards. Guindon carried through the neutral zone with two Flint defenders in tow. As soon as he carried over the offensive blue line, he slid the puck to his right to William Portokalis. The veteran center wound and fired quickly, finding the top corner, blocker-side on Michelone for his fourth of the season.

The Attack kept the pressure up for the balance of the first period, outshooting the Birds 19-8 through the opening 20. Michelone made several clutch saves to keep his team in the game. Flint’s top-two ranked penalty kill was tested twice and successful both times. The Firebirds won 10 of 19 draws in the opening frame, as well.

Riley Piercey potted the equalizer just over five minutes into the middle stanza, as momentum appeared to be shifting for the Firebirds. Zacharie Giroux carried into the offensive zone with three defenders in front of him. He made a drop-pass for Brennan Othmann (New York Rangers), who quickly fed Riley Piercey in the right circle. Piercey was wound back and ready to one-time the pass behind Chenard near-side for his seventh of the season at 5:24.

Despite Flint outshooting Owen Sound by a large margin, a late second-period goal put them down by one heading to the locker room again. This time Logan LeSage set things up with a neutral zone pass to Colby Barlow as he hit the blue line. Barlow passed to Deni Goure atop the right circle, then crashed the net. Goure wound and fired, and Barlow was positioned to redirect the low shot up high over Michelone’s left shoulder. Barlow’s ninth of the season was logged at 16:26 of the middle frame.

Second-period shots ended 18-10 to the Firebirds’ advantage. Flint won 13 faceoffs to Owen Sound’s 12. The Birds were scoreless with two opportunities with the extra man and killed their lone penalty.

The Attack extended their lead at 9:08 of the third on Barlow’s second strike of the afternoon. This time, Portokalis made a cross-ice pass from the left circle through several skates and onto the tape of Barlow’s stick. Barlow’s back door tally was assisted by Portokalis and Thomas Chafe.

The Birds battled back and closed the gap to one at 13:49. Rookie defender Tristan Bertucci slapped a shot from the left point that appeared to be headed wide of the cage, however, Coulson Pitre got the blade of his stick on the puck in midair. The resulting deflection found its way through the five-hold for Pitre’s eighth of the campaign.

Michelone was called to the bench for the extra attacker near the two-minute mark of regulation. Flint’s bench boss Ted Dent utilized his timeout at 1:45 to strategize. Flint maintained offensive zone for the majority of the final minutes, winning several key board battles to hold the puck in. The Attack iced the puck and used their timeout with 22 seconds on the clock. After winning the ensuing faceoff, Owen Sound dumped the puck down the ice and won the foot race to negate the icing call and ultimately seal the victory.

On special teams, both teams were unable to convert with three power-play opportunities. Faceoffs ended 35-29, with the Attack earning the upper hand. Owen Sound also held the edge in shots-on-goal by a margin of 40 -34.

Next Home Game: The Firebirds return to home ice Wednesday, December 8 to host the Erie Otters. It’s another Buy One, Get One Wednesday, where fans can purchase one ticket and get a second ticket of equal value for free. Puck drop is scheduled for 7 p.m. (ET) at the Dort Financial Center. Tickets are on sale NOW here: ETIX.