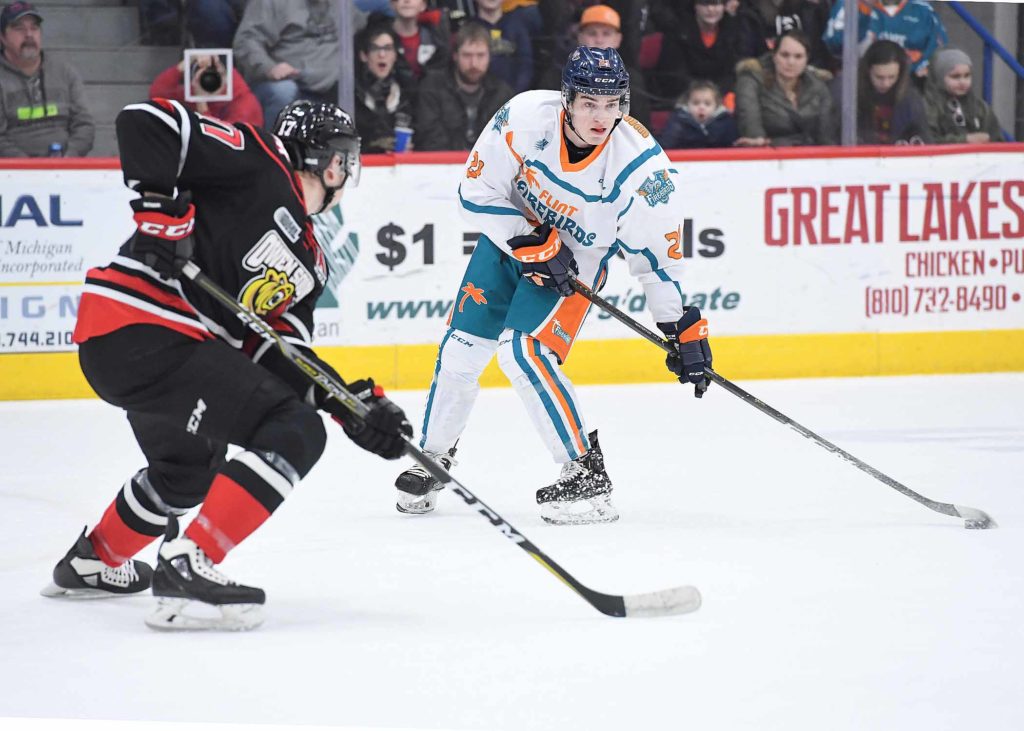 Flint is 1-2-0-0 in Flint Tropics Night games. Owen Sound played in the inaugural event, narrowly escaping with a 5-4 victory on Feb. 14, 2016. In 2017, Flint defeated the visiting Sarnia Sting by a final score of 7 – 5. Last season, in-state rival Saginaw Spirit claimed the victory in the yearly event 5-3.

Saturday marks the third of four meetings with the Attack this season, and the first of two in Flint. The Firebirds came up short in the first two away games in the series, both by a final score of 5 – 2. Last season, Flint went 1-3-0-0 versus the Attack, winning one of two in Owen Sound. All-time, the Firebirds are 2-12-0-0 versus Owen Sound and 1-5-0-0 in home games. In 14 total meetings between these clubs, five have been decided by a single goal and one required a shootout that ended in Flint’s favor.

Both teams were active Friday night. The Firebirds hosted the Oshawa Generals in what turned into a very close contest. Flint pulled within one in the final minute of play on Ty Dellandrea’s second goal of the night, but was unable to get the equalizer with the extra attacker as time expired. Kyle Harris and Vladislav Kolyachonok also scored for Flint. The Generals capitalized on three power-play chances to secure the 5 – 4 decision. Owen Sound was defeated by the Spirit 6-1 in Saginaw on Friday.

The Attack enters Saturday’s contest with a record of 27-24-2-2. They rank third in the Midwest Division and fifth in the 10-team Western Conference. They’ve won 5 of their last 10 games. Flint has picked up points in three of their last 10 games, and carries a season record of 10-43-4-0. The Firebirds are fifth in the West Division and 1oth in the Western Conference.

Promotions:
Get tropical with the Firebirds Saturday night! Inspired by the movie “Semi-Pro” starring Will Ferrell, the Firebirds will be wearing special themed jerseys, pants and socks throughout the game that are sure to impress everyone in attendance. Immediately following the game, there will be a live jersey auction, giving fans an opportunity to take home the game-worn Flint Tropics jersey of their choice. Proceeds will be donated to the Firebirds Charitable Foundation which benefits local youth organizations throughout Flint, Genesee County and Mid-Michigan. Additionally, the first 750 fans through the doors will receive Firebirds’ branded sunglasses! Also, there will be Flint Tropics’ themed t-shirts in the Firebirds’ merchandise store, The Birds Nest, for $25, beach towels for $30 and hockey pucks for $5. Special video clips from the movie Semi Pro, tropical themed music, Flint Tropics merchandise and many more fun and entertaining elements will take place throughout the night.

Riley McCourt tops Flint’s defensive troops in goals-scored (6), and now has 28 points in 39 games. He has points in nine of his last 10 contests and is ranked in the top 15 in points-per-game (0.72) among OHL defensemen. Blue-liner Vladislav Kolyachonok tops the freshman class of Firebirds with 26 points (4G, 22A) in 43 games-played after lighting-the-lamp Friday night against Oshawa.

Owen Sound Attack (27-24-2-2, 3rd Midwest Division):
Third-year center Aidan Dudas (Los Angeles Kings) leads the Attack with 22 goals and 26 assists in 55 games. Adam McMaster played for the North Bay Battalion until the holiday break in December. He now ranks second for Owen Sound with 44 total points (14G, 30A) through 56 games-played. Rounding out the top three in offensive production on the post-trade-deadline Owen Sound roster is the Belarusian Maksim Sushko (Philadelphia Flyers). He has scored 15 times and added 26 helpers through 51 contests. Sushko snapped a five-game point streak (4G, 5A) in Friday night’s contest in Saginaw.

Brady Lyle leads all defenseman for the Attack with nine goals and 22 assists in 55 games this season. The first-year players on the squad are led by Griffin Wilson with four goals and nine assists on the campaign.

Between-the-pipes, Knoxville, Tenn. native Mack Guzda has appeared in 38 games, picking up 16 wins and two shutouts. Guzda has a goals-against average (GAA) of 3.49 and .882 save percentage (SAV%). Port Huron, Mich. native Andrew MacLean carries a 3.95 GAA with a .879 SAV% through 27 appearances. He has 11 wins and one shutout on the campaign.

Broadcast Coverage:
Saturday evening’s contest against the Owen Sound Attack can be heard live on the radio throughout Flint & Mid-Michigan on US 103.1 FM, online at www.us103.com or by downloading the US 103 app here. Dominic Hennig will call the play-by-play action on the Flint Firebirds Hockey Radio Network. Pregame coverage will begin 30 minutes prior to puck drop at 6:30 p.m.

All Flint Firebirds home and away games throughout the 2018-19 season can be watched anywhere in the world online on www.ohllive.com or on the OHL Live app. OHL Live is a league video streaming platform that delivers high quality live and on-demand coverage of all regular season and playoff games annually.