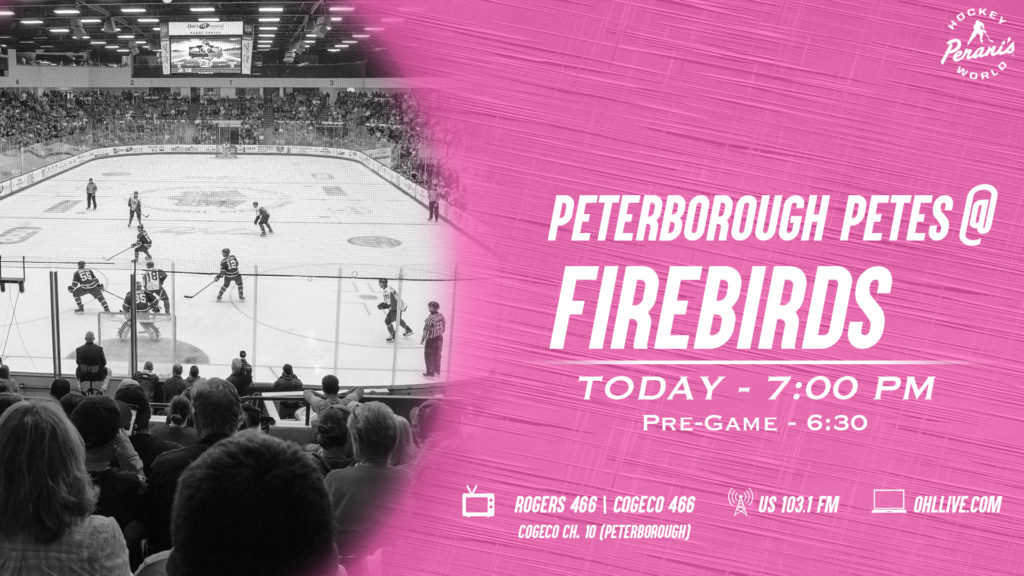 Flint, Mich. – The Firebirds return home Saturday night for the club’s annual ‘Pink Out The Rink Night’ at the Dort Federal Credit Union Event Center. Puck drop is set for 7 p.m. (ET) against the Peterborough Petes.

Flint enters Friday’s contest with a record of 4-2-0-0. They sit tied for third in the West Division. Peterborough carries a record of 6-2-0-0 and ranks second in the East Division. Due to facility renovations, the Petes are wrapping-up their longest road trip in franchise history, playing game number nine away from home Saturday night. Peterborough is on a three-game winning streak.

All-time, Flint holds a record of 2-6-0-0 versus the Petes. Both Firebirds’ victories over Peterborough happened on home ice at the Dort Federal Event Center. Last season Flint was winless in the two-game series, and Saturday is the first of two battles between the clubs this season.

The last time these two teams met was March 2, 2019 in Flint. Ty Dellandrea (Dallas Stars) and Cody Morgan were the two goal scorers for Flint’ and four other Firebirds’ picked up points in a 6-2 deficit. For Peterborough, Declan Chisholm (Winnipeg Jets) recorded a four-point night to lead the Petes.

On special teams this season, the Firebirds are killing penalties at a rate of 69.2%, which is 17th-best in the OHL. Peterborough’s penalty-killers rank 13th at 72.7% efficiency through eight games. With the man-advantage, the Petes rank fifth in the league, converting at a rate of 28.0% and the Firebirds are 17th, each scoring at a 14.8% clip.

Promotions:
For the fifth-straight year, the Firebirds are teaming up with the McLaren Flint Foundation to raise money to help in the fight against breast cancer. Because the pink ribbon is an international symbol of breast cancer awareness, the Firebirds are asking all fans to wear pink to the game. Fans can bid on game worn Flint Firebirds’ player jerseys in a live auction that will take place immediately following the game. All proceeds will be donated to breast cancer research through the McLaren Flint Foundation. Additionally, the first 400 women will receive a free Pink Carnation courtesy of Bentley Florist. The Firebirds will also have Pink Out merchandise at the Firebirds’ merchandise store, The Birds Nest, inside the Dort Federal Credit Union Event Center.

Flint Firebirds (4-2-0-0, T-3rd West Division):
Newcomer Evgeniy Oksentyuk continues to lead the ‘Birds on the scoresheet with eight points (3G, 5A) through six games. Evan Vierling is tied with Connor Roberts for second with seven points. Vierling has one goal and a team-high six helpers. Roberts has three goals and four helpers. Veteran forward Jake Durham leads the ‘Birds in goals-scored with five. His six total points have him tied with team captain Ty Dellandrea, who rides a three-game (2G, 4A) point streak into Saturday’s contest.

Vladislav Kolyachonok (Florida Panthers) leads the defensive unit with a goal and four assists through five games. Dennis Busby (Arizona Coyotes) has three helpers for three points, ranking second among the rearguards on the squad and Riley McCourt has scored in both of the last two games.

Between the pipes, Anthony Popovich has appeared in four of Flint’s six games this season. Along with three victories, he’s posted the OHL’s seventh-best goals-against average (GAA) at 2.90 and the ninth-best save-percentage (SAV%) of .908. Luke Cavallin has appeared in two contests, earning one victory and a .838 SAV% with a 6.01 GAA.

Peterborough Petes (6-2-0-0, 2nd East Division):
Nick Robertson, who hails from Northville, Mich., leads the Petes and the entire OHL in goals with 11. His 17 total points has him tied for second in the league with teammate Semyon Der-Arguchintsev, who leads the league with 15 assists. Liam Kirk ranks third on the club with 11 total points (7G, 4A). Kirk’s ‘+/-‘ ranking of ‘+10’ has him tied for third in the OHL.

Defenseman Declan Chisholm (Winnipeg Jets) tops the rearguards with 10 assists, which are tied for the fifth-most in the league. Rookie centerman Mason McTavish leads Peterborough’s freshman class with nine total points (6G, 3A) in eight games-played. He ranks second among first-year players in total points and is tied for the lead in goals-scored.

In goal, Hunter Jones has played in six of the Petes’ eight games, and won all six. He carries the OHL’s third-best goals-against average (GAA) at 2.33, and is tied for the league’s second-best save-percentage (SAV%) at .924. Sophomore netminder Tye Austin has appeared in two contests and carries an 8.19 GAA with a .758 SAV%.

The Petes have more than 200 alumni that have played in the NHL. Four former Petes’ players that were inducted into the Hockey Hall of Fame are Steve Yzerman, Bob Gainey, Larry Murphy, and Chris Pronger. Other notable players from Peterborough to play in the NHL include Tie Domi, Keith Crowder, Steve Downie, Danny O’Shea, Jamie Langenbrunner, Steve Montador, Mickey Redmond, Mike Ricci, Luke Richardson, and Eric Staal.

Broadcast Coverage:
Saturday evening’s contest against the Peterborough Petes can be heard live on the radio throughout Flint & Mid-Michigan on US 103.1 FM, online at www.us103.com or by downloading the US 103 app here. Dominic Hennig will call the play-by-play action and Andy Clark will provide color commentary on the Flint Firebirds Hockey Radio Network. Pregame coverage will begin 30 minutes prior to puck drop at 6:30 p.m.