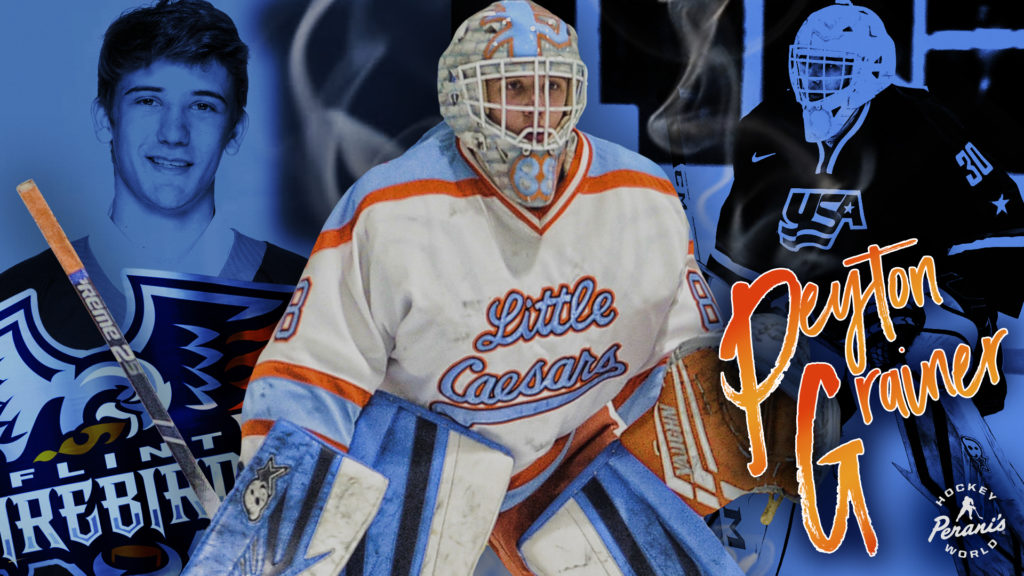 “We are thrilled to announce that Peyton and his family have committed to the Flint Firebirds,” said Flint Firebirds Vice President of Hockey Operations and General Manager Barclay Branch. “Peyton is a good young goaltender that is fundamentally sound and possesses a high compete level.”

Grainer, a native of Livonia, Mich., was heavily recruited with NCAA options before choosing to continue his hockey and academic development in Flint. The 6-foot-1, 165-pound netminder has spent the last seven years playing among the best AAA youth hockey organization’s in the world.

Last season, Grainer posted a 30-5-0 record in net and a 1.50 goals against average (GAA) in 35 games with the Detroit Little Caesars Midget Minor 16U AAA Hockey Club. Grainer recorded a 3-0 record to earn Little Caesars the 2019 Michigan Amateur Hockey Association (MAHA) Midget Minor Tier 1 16U AAA State Championship in Taylor, Mich. in March. Then Grainer was a perfect 2-0 in goal at the 2019 Chipotle-USA Hockey Youth Tier I 16U AAA National Championship in Grand Rapids, Mich. in April.

“This opportunity is a dream come true for me,” said Grainer. “To have a chance to play in a league like the OHL is unbelievable but I know there is still a lot of work ahead of me. I’m excited to join a coaching staff and organization that is so dedicated to their players and fans. I would like to thank my parents for all of their sacrifices.”

For the past two years, Grainer was invited to play in the prestigious USA Hockey Boys Select Player Development Camps in Amherst, New York. Most notably, he recorded a 2.40 GAA and a .923 save percentage (SAV%) in four games last July, making him among the top four goaltenders in the camp.

Grainer will join the Firebirds today and is expected to play tonight against the Saginaw Spirit at the Dow Event Center.

This season, Grainer will split time between Flint and the Detroit Belle Tire U18 Midget Major AAA hockey club, who are part of the Tier 1 Elite Hockey League (T1EHL). Grainer will wear number 88 for the Firebirds.

The Flint Firebirds will host their in-state rival, the Saginaw Spirit, in the Firebirds’ only home exhibition game of the 2019 Pre-Season this Saturday, September 14th. Game time is set for 7 p.m. at the Firebirds’ official practice facility, Flint Iceland Arenas on Elms Rd. in Clayton Township. Tickets are free for all Firebirds’ season ticket holders. Parking is free for all fans. General admission seating is $10 and can be purchased in advance at the Dort Federal Event Center Box Office or at Iceland Arena’s. Flint’s regular season home opening night is on Saturday, Sep. 28 when the club hosts the Niagara IceDogs at the Dort Federal Credit Union Event Center.