Firebirds home This Saturday for “Pink Out The Rink” Night 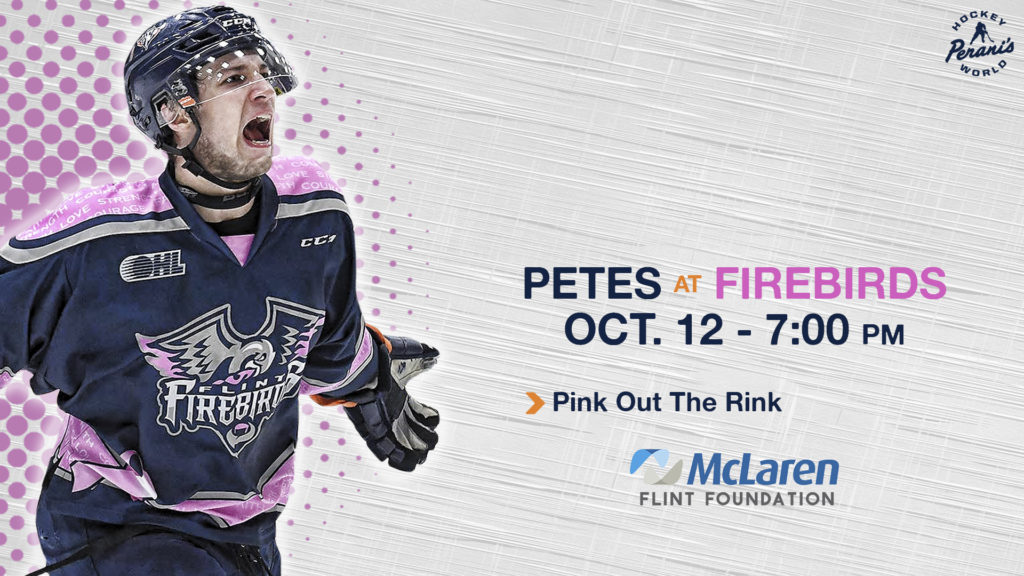 The Firebirds return home to Flint for the club’s 5th-annual “Pink Out The Rink Night” this Saturday, October 12th. Puck drop is set for 7 p.m. (ET) at the Dort Federal Credit Union Event Center and great seats are still available!

For the fifth-straight year, the Firebirds are teaming up with the McLaren Flint Foundation to raise money to help in the fight against breast cancer. Because the pink ribbon is an international symbol of breast cancer awareness, the Firebirds are asking all fans to wear pink to the game. Fans can bid on game worn Flint Firebirds’ player jerseys in a live auction that will take place immediately following the game. All proceeds will be donated to breast cancer research through the McLaren Flint Foundation.

The Firebirds will also have Pink Out merchandise at the Firebirds’ merchandise store, The Birds Nest, inside the Dort Federal Credit Union Event Center.

About The Flint Firebirds:
The Flint Firebirds are a proud member of the prestigious 20-team Ontario Hockey League. The OHL is one of three leagues that make up the 60-team Canadian Hockey League (CHL), which is known as the world’s premiere player development league for the NHL. On NHL opening day rosters in October, 70% of NHL players were CHL alums. Since the Firebirds’ inception in Flint, Michigan four seasons ago, the team has produced 17 NHL signed or drafted players. More than 250 scouts representing all 31 NHL clubs attended a Firebirds game in Flint throughout the 2018-19 season. The Firebirds average nearly 3,000 fans per game at the newly renovated Dort Federal Credit Union Event Center, reaching over 100,000 fans each OHL season.