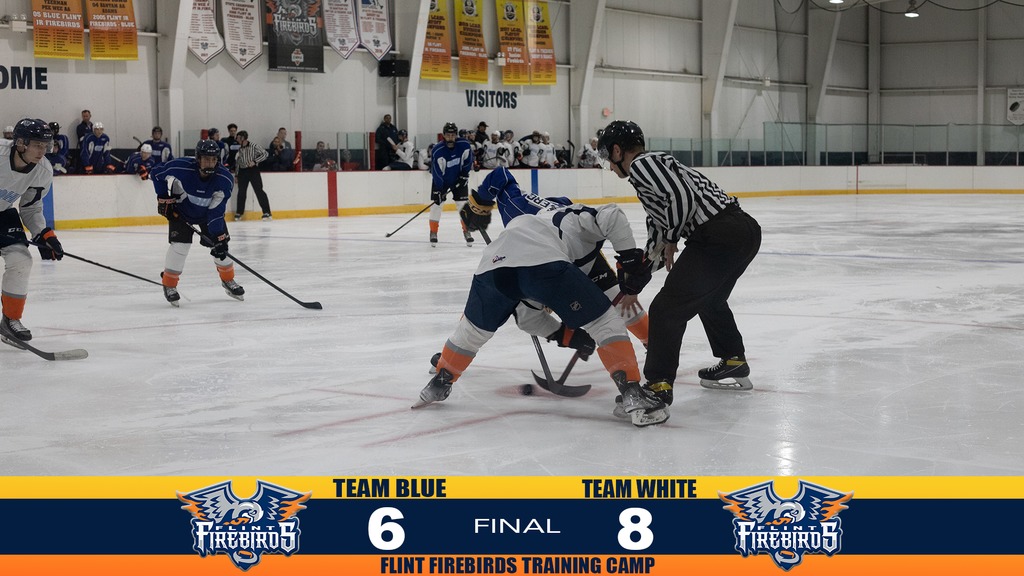 Flint, Mich. – The Flint Firebirds’ annual Blue vs. White game at Flint Iceland arena concluded Training Camp Thursday morning ahead of the 2022-23 season. Nathaniel Day got the start in net for Team White and newly acquired OA Will Cranley (St. Louis Blues) got the start for Team Blue.

The game jumped out to a hot start with Team Blue leading 4-2 after a period of play. Riley Piercey recorded a first-period hat trick and Will Cranley stopped 18 shots while adding an assist. Nikita Zozulia (2022 Import Selection) added the fourth goal for Team Blue and it was Braeden Kressler (Toronto Maple Leafs) and Sahil Panwar with the tallies for Team White.

The second period saw a tighter game played. Will Cranley manned the net for Team Blue and it was Patrick Sutherland (2022 Priority Selection) taking over for Team White.

Despite some nice plays from Brennan Othmann (New York Rangers), Zacharie Giroux, and Coulson and Kaden Pitre, both goaltenders did a nice job keeping pucks out of the net. Joshua Vogelsberg added a goal for Team Blue before Samuel Assinewai answered for Team White. Blue maintained a 5-3 lead after 40 minutes.

Logan Kennedy (2022 Priority Selection) took over in net for Team White to start the 3rd and it was Ian Michelone between the pipes for Team Blue.

The final period had a feeling-out process before captain Brennan Othmann sniped one five minutes in to cut Team Blue’s lead to one. On the power play, Michael Maclean skated through traffic and sent a nice backhand pass to the nearside post for Nathan Aspinall (2022 Priority Selection) who tied the game up at five with just over 11 minutes to go.

Zack Terry completed the comeback after a nice passing play between the Pitre brothers with 7:56 to go to give Team White their first lead of the day 6-5. However, Team Blue wouldn’t go away quietly as Amadeus Lombardi (Detroit Red Wings) buried one on a give-and-go feed from Zozulia to tie things up with 3:21 left in the game.

Dylan Lariviere (2021 Priority Selection) iced things for Team White with 46.3 seconds left and the Pitre brothers combined for the final tally, with Coulson finishing it off, to give Team White the 8-6 win.

Next Up: The Firebirds next hit the ice Friday night in Windsor. Their preseason home opener will take place on Sunday, September 11 at 4:00 p.m. against the Windsor Spitfires at Flint Iceland arena. Tickets are free for all season membership holders and $10 cash only for the general public.

The Flint Firebirds open the 2022-23 season on home ice Saturday, October 1 at 7:00 p.m. against the Niagara IceDogs. Season Memberships are on sale NOW starting as low as $12 per game or $408 for the full season. More information on becoming a 2022-23 season membership holder can be found HERE. Additionally, single-game tickets will go on sale beginning next week.