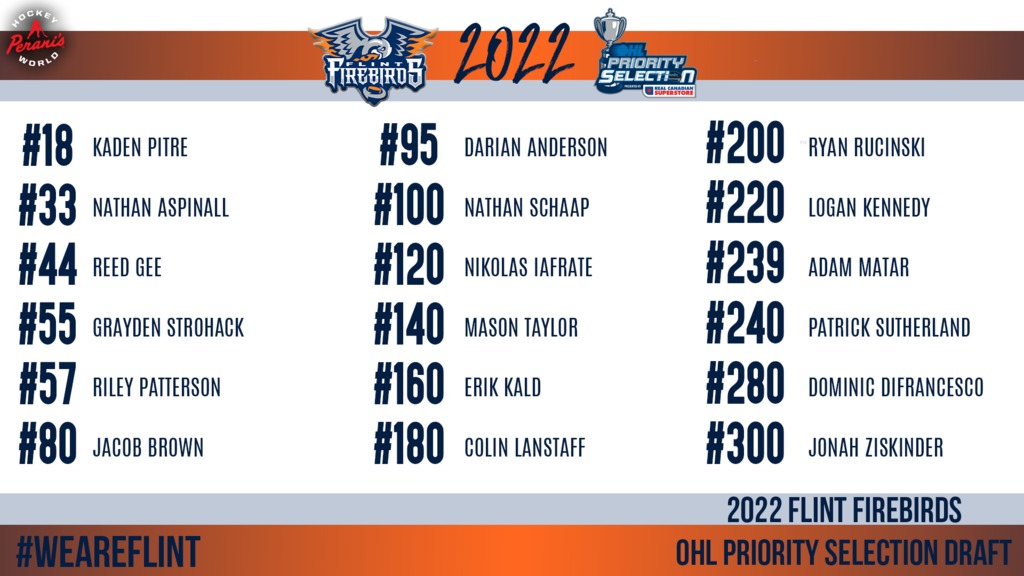 “It’s a great honor,” Pitre said. “I’m just trying to process everything. I want to do the best I can when I get to Flint and help the team in every way I can.”

Pitre recorded 13 G and 17 A in 31 GP for the Vaughan Kings U16 AAA (GTHL) this season. He is the younger brother of current Firebird forward Coulson Pitre.

The Firebirds had the most picks of any team on Day One and took three forwards along with two defensemen. After Pitre, the Firebirds selected forward Nathan Aspinall from the U16 Markham Waxers. Aspinall, the Markham native, stands at 6-foot-4.5 and 161-pounds. He scored 17 G and 22 A in 27 GP. His 39 points were the fourth most in the ETAHL U16.

Flint had three picks in the third round and started things off by taking their first defenseman when they selected Reed Gee from the Quinte Red Devils. He scored 9 G and 14 A in 26 GP, good for the sixth-most among defensemen in the ETAHL U16. They followed up with another defenseman nine picks later in Grayden Strohack. The 6-foot-2, 183-pound left-hander produced 4 G and 17 A in 27 GP. The Waterloo, ONT. native finished with the third-most points for a defenseman in Alliance U16. The final pick of Day One was center Riley Patterson of the OHL Cup champion Mississauga Senators U16 AAA. He 2 G and 4 A in 7 GP at the OHL Cup after having 30 Pts in 28 GP during the regular season.

Day Two kicked off with Flint selecting their first goalie of the draft when they took Jacob Brown at 80th overall from the Greater Kingston Gaels. The 6-foot-1, 183-pound netminder posted a 2.62 goals-against average (GAA) in 14 GP in the ETAHL. Next, the Birds drafted their first Michigander, taking forward Darian Anderson from Little Caesars U15. The Brighton, Mich. native scored 8 G in 9 GP at the 4CLUBS U15 level this season, tied for the fourth-most in the league.

With the 100th pick in the draft, the Birds selected defenseman Nathan Schaap from the North Central Predators. The big 6-foot-2, 201-pound right-hander had 33 Pts and 56 PIMs. He had the 3rd most points among defensemen in the ETAHL.

Following Schaap were back-to-back picks from the Don Mills Flyers, also where Firebirds captain Brennan Othmann played his U16 season. First, in the sixth round, they selected LW Nikolas Iafrate. The cousin of former NHL-great Al Iafrate had 57 Pts in 57 GP, which was the 10th best at the U16 AAA level. Next, Flint selected left-handed defenseman, Mason Taylor. The Oakville, ON native had 2 G and 18 A for the Flyers and stands at 5-foot-10, 159-pounds.

With their 8th-round pick, Flint took another big defenseman in Erik Kald. The 6-foot-2, 180-pound right-hander hails from Oyster Bay, NY, and finished second in defenseman scoring in the AYHL U15 level with 4 G and 18 A. At pick #180, Flint went with a skilled right-wing from Elgin Middlesex in Colin Langstaff who scored 26 Pts in 27 GP in ALLIANCE U16.

The Firebirds selected their third American prospect in the 10th-round with center Ryan Rucinski. The center from Broadview Heights, OH had 14 Pts (5 G, 9 A) in 17 GP with the Cleveland Barons U15 team. In the 11th-round, Flint drafted their second netminder in Logan Kennedy from the Vaughan Kings. The Thornhill, Ont.-native played 2 games in the OHL Cup and had a .971 SV%.

With the final two picks, The Firebirds selected St. Catherine’s, Ont. native Dominic DiFrancesco. The left-winger had 33 Pts in 22 GP for the Niagara North Stars, which was fifth in the SCTA U16. The final pick (#300 overall) was defenseman Jonah Ziskinder from the Toronto Jr. Canadiens.

The 18 draft picks were the most in franchise history since moving to Flint in 2015. The Firebirds resume playoff action tomorrow, May 1, for Game 5 at 4:00 pm with the series tied at two. Tickets for Game 5 are available from ETIX HERE, at the Dort Financial Center Box Office starting at Noon tomorrow or by calling 1-800-514-3849.

About the Ontario Hockey League:

About The Flint Firebirds:
The Flint Firebirds are a proud member of the prestigious 20-team Ontario Hockey League. The OHL is one of three leagues that constitute the 60-team Canadian Hockey League (CHL), which is known as the world’s premiere player development league for the NHL. On NHL opening day rosters in October, 70% of NHL players were CHL alums. Since the Firebirds’ inception in Flint, Michigan five seasons ago, the team has produced 22 NHL signed or drafted players. More than 250 scouts representing all 31 NHL clubs attended a Firebirds game in Flint during the 2021-22 season. The Firebirds average nearly 3,000 fans per game at the newly renovated Dort Financial Center, reaching over 100,000 fans each OHL season.