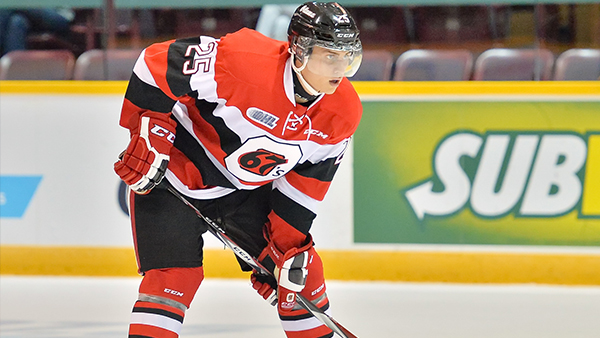 Pittman, a native from Macomb, Mich., played two seasons with the Lincoln Stars in the USHL before making the jump to the Ontario Hockey League (OHL) with Ottawa.

“It’s very exciting. It’s great to be playing this close to home and to my family and friends,” said Pittman. “I already work out with Rich (Tremblay) and skate with Coach Gruden, Mitch Jones and Ryan Moore so it already feels like home to me.”

Last season, as a defenseman, Pittman tallied 10 points in 41 games, while recording 25 penalty minutes, including a plus three rating with the Ottawa 67’s.

“He’s a type of player that is going to bring in an excellent work ethic, big character and he’ll have a presence in the locker room from a positive standpoint,” said Christensen. “We’re very excited to acquire a quality player that we think will make a difference for our team next year.”

Before junior hockey, Pittman was a member of the 2012 MAHA Midget Minor State Champions, Detroit Honeybaked AAA hockey program, often referred to as one of the top youth hockey clubs in North America.

Firebirds season tickets for the 2015-16 inaugural season are currently on sale and can be purchased at the Perani Arena & Event Center Box Office, Monday thru Friday from 9 a.m. to 5 p.m. (ET). More information on season tickets can be found at FlintFirebirds.com or by calling Mary Nagy at the Perani Box Office at (810) 744-0580. Individual game tickets will go on sale Friday, Aug. 7, at 10 a.m. (ET). Opening night is Saturday, Sep. 26, versus the Saginaw Spirit.