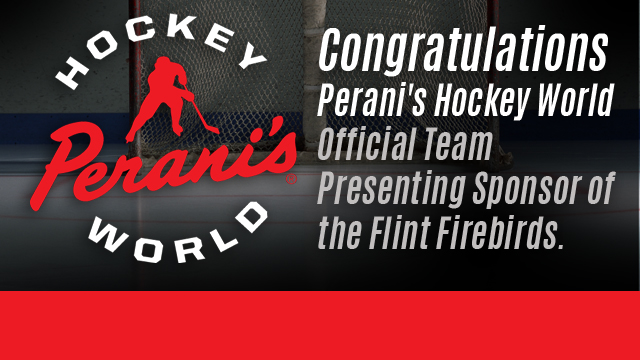 The historic partnership between the Flint Firebirds and Perani’s Hockey World will take effect immediately and will include substantial collateral, digital and in-arena co-branding initiatives, as well as a mix of innovative and interactive components designed to enhance the overall fan experience.

Flint Firebirds team president, Costa Papista said: “We could not have a better team presenting partner than Perani’s Hockey World. The Perani name is synonymous with hockey locally and across the country. The company and family members understand the hockey business and the magnitude of the OHL project for Flint and Genesee County. This strategic partnership will allow us to professionally and aggressively market and promote the Flint Firebirds franchise for our first five seasons. This will be critical to establish loyalty and brand awareness.”

Bob Perani’s Hockey World was established in 1976 and is headquartered in Flint, Mich. Perani’s Hockey World is a specialty sporting goods retailer focused on hockey and lacrosse with 21 locations across the country and three locations in Canada. Bob Perani was a draft pick of the Toronto Maple Leafs in 1959 and a former goaltender for the Flint Generals for five seasons. Mr. Perani purchased the naming rights of the IMA Arena in 2003, eventually rebranding it as the Perani Arena & Event Center. Today the arena is known as the Dort Federal Event Center.

“I am excited about our partnership with the Flint Firebirds and continuing the legacy that Bob Perani helped start, growing hockey in and around Flint,” said Kevin Ward, President of Perani’s Hockey World. “It is exciting to get an OHL team in Flint and I look forward to watching world class hockey in the Dort Federal Event Center. Perani’s Hockey World is proud to partner with such a first class organization and I look forward to growing the great game in this loyal hockey community. Becoming the Firebirds presenting sponsor continues Bob Perani’s legacy of supporting hockey in Flint,” added Ward.

The Flint Firebirds will showcase Perani’s Hockey World with a fully integrated marketing program that includes advertisement in television, radio and print. Perani’s presence will also be seen on the Firebirds website and social media outlets, in the Firebirds game program, magnetic and pocket schedules, recognized at all Firebirds games as the season’s presenting sponsor and many more avenues throughout the five-year term.

“I am very excited about this partnership.  The Flint community supported my dad and this partnership lets us give support not only to a great organization but the revitalization of a great city,” said Robert Perani, Vice President of Perani’s Hockey World.

About The Flint Firebirds

The Flint Firebirds are a proud member of the prestigious Ontario Hockey League (OHL) based in Flint, Michigan, USA. The team is part of the West Division of the Western Conference in the OHL, known as the premiere development league for the NHL. The Firebirds players, generally ranging in ages between 16 and 20, play their home games at the Dort Federal Event Center in Flint between September and May.

Bob Perani was a professional ice hockey goaltender for the Flint Generals in the International Hockey League (IHL). Perani was born in Rome, Italy in 1942 and moved to Canada with his family in 1953, settling near Toronto where he discovered the game of hockey. By the age of 16, Perani was drafted by the Toronto Maple Leafs before becoming an All-American goaltender at St. Lawrence University. Bob and his wife Kris moved to Flint in the late 1960s in which Perani spent five seasons playing for the Generals. He retired as a player after the 1974 season and started “Bob Perani’s Sports Shop” in 1976.