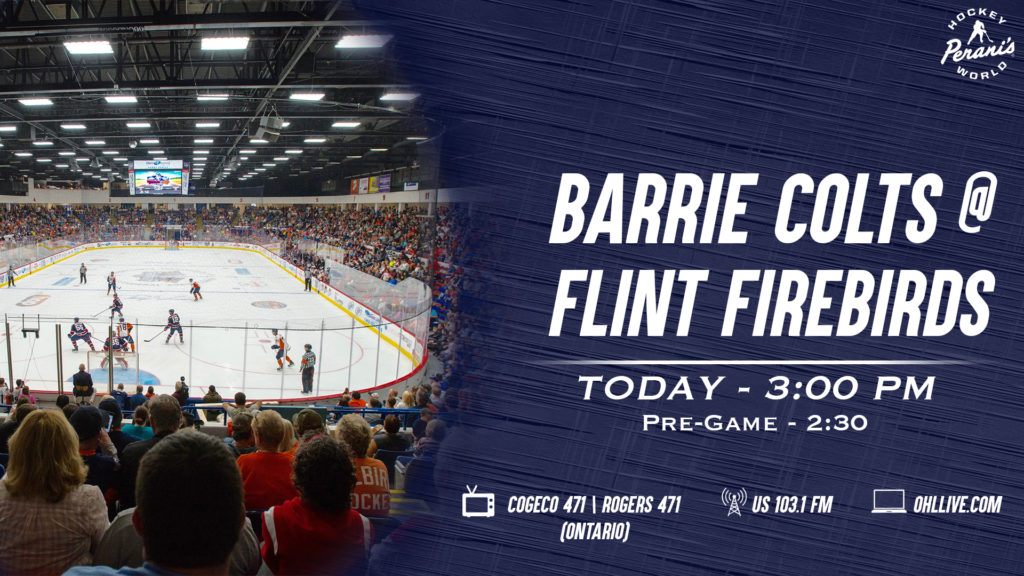 Saturday night marks the first of four regular-season meetings between these clubs this campaign, and the only time they’ll meet in Flint. All-time, the Firebirds hold a record of 1-7-0-0 in games against the Colts. The ‘Birds are 0-4-0-0 in the series on home ice. Last season Flint finished with an overall record of 1-1-0-0 versus the Colts, with the victory being on the road.

Barrie enters Saturday’s tilt with a season record of 9-5-0-1. The Colts are 4-3-0-1 in road games, whereas the Firebirds are the OHL’s only unbeaten team on home ice with a record of 6-0-0-0. On Friday night, Flint dropped a 7 – 5 decision to the Sting in Sarnia and the Colts defeated the Spirit 4 – 3 in a shootout in Saginaw.

On special teams this season, the Firebirds are killing penalties at a rate of 72.7%, which is tied for 15th-best in the OHL. Sarnia’s penalty-killers rank 12th at a 74.7% efficiency. With the man-advantage, the Colts rank 15th in the league, scoring at a 21.2% clip. Flint converts at a rate of 14.5% on the power play.

Promotions:
Saturday afternoon’s contest is Grandparent’s Day, featuring up to two free kids tickets (17 & under) with the purchase of a paid grandparent’s ticket at the Dort Federal Event Center Box Office, starting as low as $12.

Flint Firebirds (10-4-0-0, 1st West Division):
Evgeniy Oksentyuk continues to lead the way for Flint with seven goals and a team-leading 11 assists for 18 points through 14 contests. Ty Dellandrea (Dallas Stars) has played in 12 games with Flint this season, racking up seven goals and nine helpers for 16 total points. Defenseman Riley McCourt is averaging a point per game with four goals and ten assists in 14 games-played, ranking the rearguard third on scoresheet. Jake Durham leads the ‘Birds in goals with eight, plus has five assists for 13 total points.

Dennis Busby (Arizona Coyotes) is tied for the OHL’s seventh-best plus/minus rating a +12.

Between the pipes, Anthony Popovich has played in nine games this season. His seven victories are tied for third-most in the OHL. He also ranks sixth among goaltenders with a save-percentage (SAV%) of .911, and sixth in goals-against average (GAA). Luke Cavallin now has wins in three of five games, and he carries a 4.41 GAA with a .882 SAV%.

Barrie Colts (8-5-0-1, 2nd Central Division):
Second-year forward Tyson Foerster is off to a fast start, scoring 13 goals and adding 12 assists for 25 points through 15 games-played. His 13 goals are tied for fourth-most in the OHL. Matej Pekar (Buffalo Sabres) also has 13 goals plus nine helpers in 15 games. Pekar’s tied for the most game-winning goals in the league with four. Jason Willms ranks third on the club with 19 points (4G, 15A).

The Barrie rearguards are led by Tyler Tucker (St. Louis Blues), who has three goals and 11 assists through 12 contests. Brandt Clarke is a first-year blue-liner who’s eight assists equal the most points by a rookie on the club.

Between the pipes, Arturs Silovs (Vancouver Canucks) has played in nine games. He has six wins, along with a goals-against average (GAA) of 3.07 and a save-percentage (SAV%) of .905. Second-year netminder Jet Greaves has six appearances with three victories. He carries a GAA of 4.68 and a SAV% of .845.

Broadcast Coverage:
Saturday afternoon’s contest against the Barrie Colts can be heard live on the radio throughout Flint & Mid-Michigan on US 103.1 FM, online at www.us103.com or by downloading the US 103 app here. Dominic Hennig will call the play-by-play action on the Firebirds Hockey Network (FHN). Pregame coverage will begin 30 minutes prior to puck drop at 2:30 p.m. New this season, fans can watch the FHN TV Pregame Show live on Facebook and Twitter, also beginning at 2:30 p.m.