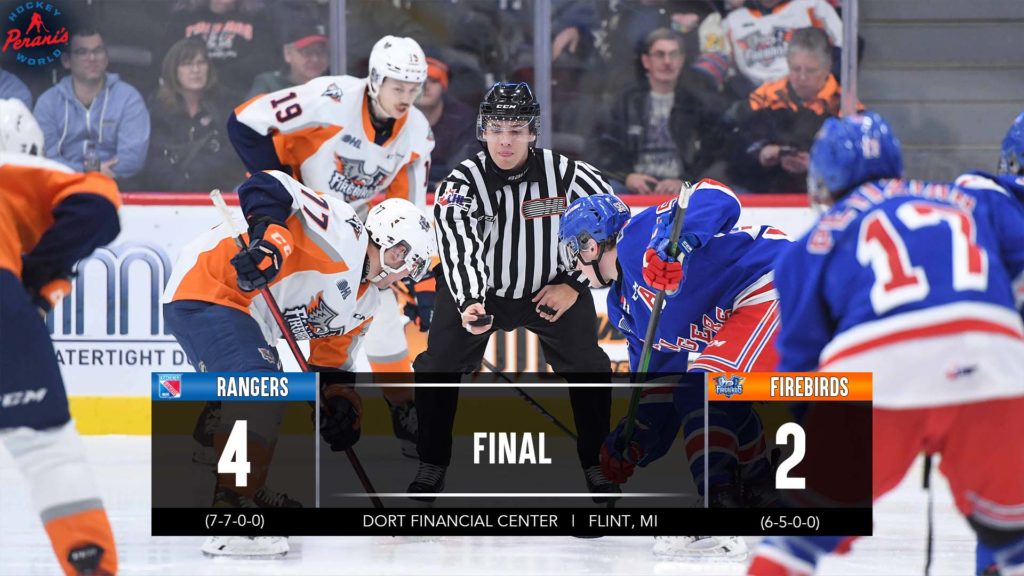 Flint, Mich. – The Firebirds were unable to solve rookie goaltender Jackson Parsons more than twice in a  4-2 defeat to Kitchener Saturday night. Tag Bertuzzi and Samuel Assinewai each scored their first goal of the season as the lone tallies for the home team. For the visitors, Reid Valade scored twice and Arber Xhekaj (Montreal Canadians) and Mike Petizian all lit the lamp. Parsons made 40 saves on 42 shots for his third victory of the season.

The Rangers broke the scoreless tie 1:24 into the first period. A turnover in the neutral zone sprung Matthew Sop and Reid Valade on a two-on-one break toward Cavallin. Sop carried up the left-wing side and made a tape-to-tape pass to Valade across the high slot for a one-timer over Cavallin’s left pad. The goal was Valade’s fourth of the campaign.

Kitchener doubled their lead at 11:04 of the first off an offensive-zone faceoff win. Sop won the draw back to Jacob LeBlanc at the left point. LeBlanc made the cross-ice pass to Arber Xhekaj at the right point, and he launched a slapshot that found twine for his second of the season.

The Firebirds narrowed the gap at 15:06 when Sahil Panwar picked a defenseman’s pocket along the left-wing boards down low. Panwar carried behind the Kitchener net and attempted the wraparound to Parson’s left. The young netminder made the initial save, and a second save off Samuel Assinewai’s shot attempt. Tag Bertuzzi crashed the net and was able to poke the second rebound home from the doorstep for his first goal in a Flint jersey.

As Xhekaj stepped out of the penalty box as his minor expired, he was the recipient of a loose puck. He rushed up-ice on an odd-man rush and made a circle-to-circle pass to Mike Petizian for the one-timer past Cavallin for his team-leading ninth of the season at 17:52.

First-period shots on goal were 16-10 to the Rangers’ advantage. Flint held the slight edge in the faceoff circle 13-11. Flint’s special team’s units killed off two penalties in the opening frame but were unable to convert on their lone chance with the man advantage.

The scoreless second period became a story of a rookie goaltender preserving the two-goal lead for his Rangers. The Firebirds outshot Kitchener 18-8 in the middle frame but were unable to solve Parsons, even on a lengthy five-on-three power-play opportunity. Flint again controlled the faceoff circles, winning 16 of 23 draws in period two.

Brennan Othmann (New York Rangers) skated in on Parsons all alone in the sixth minute of third-period play, bringing the fans at the Dort Financial to a frenzy. He made a great move but was met with the right pad of the Kitchener netminder for the biggest save of the game. He amazed the crowd again making a save to his left before diving horizontally to his right to make a second save off a Flint one-timer attempt with under ten minutes remaining.

Late in the game with heavy traffic in front of Luke Cavallin, a loose puck led to a lengthy scramble that ended with the puck in the back of the net. The goal was credited to Valade, his fifth of the season logged at 16:54. Assists were credited to Petizian and Mercer.

The final marker of the contest was off the stick of Samuel Assinawai, the first of his OHL career at 19:29. Assists were given to James Petrovski and Dmitry Kuzmin.

Final shots ended 42-32 in Flint’s favor. Faceoffs were 36-29 to the Firebirds’ advantage. On special teams, Flint went 0-6 and kept the Rangers scoreless on two power-play chances.

Next Home Game: The Firebirds return to home ice Friday night to host the Erie Otters for the third time this season. Puck drop is scheduled for 7 p.m. (ET). Tickets are on sale NOW here: ETIX.