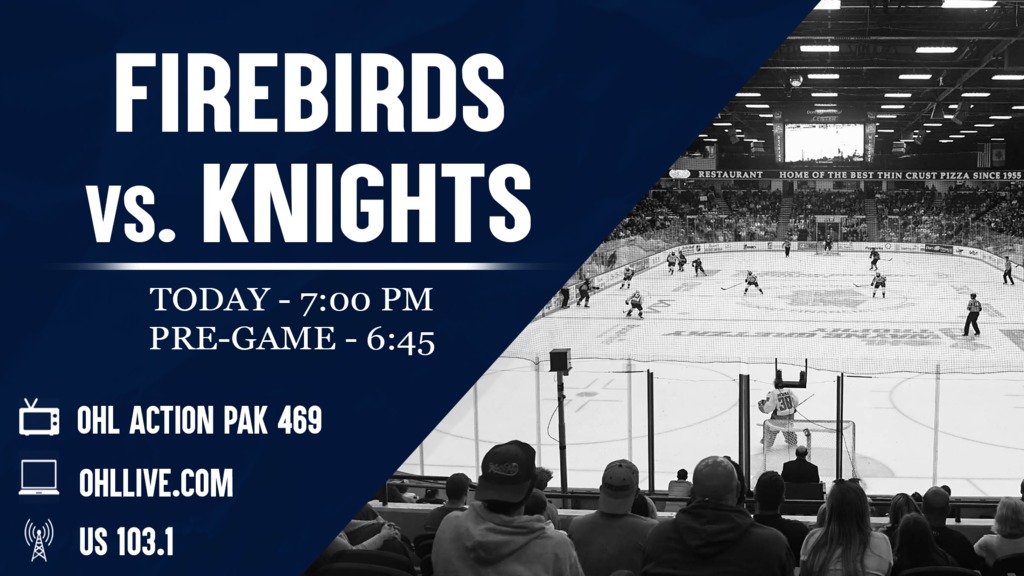 Last night, the Firebirds traveled to London, Ontario and defeated the Knights in front of more than 9,000 fans at the packed Budweiser Gardens. Tonight, the clubs reunite in Flint to complete the home-and-home series. Puck drop is set for 7:00 p.m. (ET) at the Dort Financial Center. Tickets for Tonight’s home contest are available now from ETIX HERE.

The Firebirds won the first of the back-to-back games against the Knights by a final score of 6-4 last night. Zacharie Giroux led the charge with two goals for Flint, while both Amadeus Lombardi (Detroit Red Wings) and Dmitry Kuzmin (Winnipeg Jets) logged a goal and an assist each. Nathan Day earned his fourth victory in net with a 17-save performance. With the win, the Birds have picked up 10 of a possible 12 points in their past six contests, going 4-0-1-1 in that span. The Knights were winners of four straight prior to last night’s game.

Flint enters tonight’s contest with a record of 11-7-1-1, seeding them third in the West Division. They’re one point behind the second-place team and only three points out of first. The Knights rank second in the Midwest Division with a 9-7-1-0 mark. In the ten-team Western Conference, Flint ranks fourth and London is sixth.

Tonight marks the second of four games between these clubs this season, and the first of two to be played in Flint. All-time, the Firebirds hold a record of 7-15-1-2 versus the Knights and have gone 3-7-1-1 on home ice in the series. Last year, the Birds won both meetings in Flint and finished 4-1-0-0 across five tilts with London.

On special teams, Flint has scored on 22.0% of their power-play chances, ranking them ninth in the OHL. London is converting at a rate of 26.1%, placing them in the third overall spot. The Birds have killed off 79.0% of the penalties they’ve taken, which is the 11th-best in the league. The Knights are fifth with an 83.1% kill rate.

Braeden Kressler (Toronto Maple Leafs) has played in only 12 games with the club, but leads the pack with ten goals and already has 15 points. Kressler ranks seventh in the OHL in faceoff win percentage among players with 100+ draws at 59.0%. He’s also one of five players in the league with two shorthanded goals this year, and that’s tied for the most to date.

The defensive unit is led by Dmitry Kuzmin’s 17 points, stemming from three tallies and 14 helpers. He’s tied for the third-most assists among all league defenders and has the fifth-most points. Luca D’Amato ranks third in the OHL with a plus/minus rating of +15.

In goal, Flint’s netminders are led by overage veteran Will Cranley (St. Louis Blues), who’s played in 16 games this season. He’s posted a 3.04 goals-against average (GAA), and his .913 save percentage (SV%) is fourth-best in the league. Cranley is credited with seven victories. Nathan Day now has four wins across seven appearances and carries a GAA of 4.78 with a .829 SV%.

George Diaco is tied atop the stats for the Knights with 22 points (10 G, 12 A) through 16 games played. His six power-play goals are tied for the second-most in the league, and he ranks second for scoring the first goal of the game five times this season. Sean McGurn also has 22 points, stemming from seven tallies and a club-high 15 assists in 16 contests. McGurn’s 15 helpers are tied for ninth-most in the OHL. Denver Barkey is third with four goals and 13 assists for 17 points.

The defensive unit is topped by an NHL first-round pick and a rookie. Logan Mailloux (Montreal Canadians) has six goals and seven assists in 12 games played this season. Rookie defender Oliver Bonk has three goals and 10 assists through 17 tilts. He currently has one goal and nine assists on his current seven-game point streak.

The Knights’ starting goaltender is the reigning OHL Goaltender of the Year Brett Brochu who has seven wins in 14 appearances so far this season. He carries a 3.40 goals-against average (GAA) and a .874 save percentage (SV%). Rookie Zach Bowen has two victories in five appearances, posting a 2.96 GAA and an SV% of .895.

This evening’s contest against the London Knights can be heard live on the radio throughout Flint & Mid-Michigan on US 103.1 FM, online at www.us103.com or by downloading the US 103 app here. Jack Sznewajs will call the play-by-play action on the Firebirds Hockey Network (FHN), starting with the pre-game show at 6:40 p.m. (ET).

Next Up: The Firebirds host their in-state rival the Saginaw Spirit Wednesday for Game 2 of the I-75 Divide Cup, presented by Coors Light. Puck drop is set for 7:00 p.m. (ET), and great seats are still available from ETIX HERE.