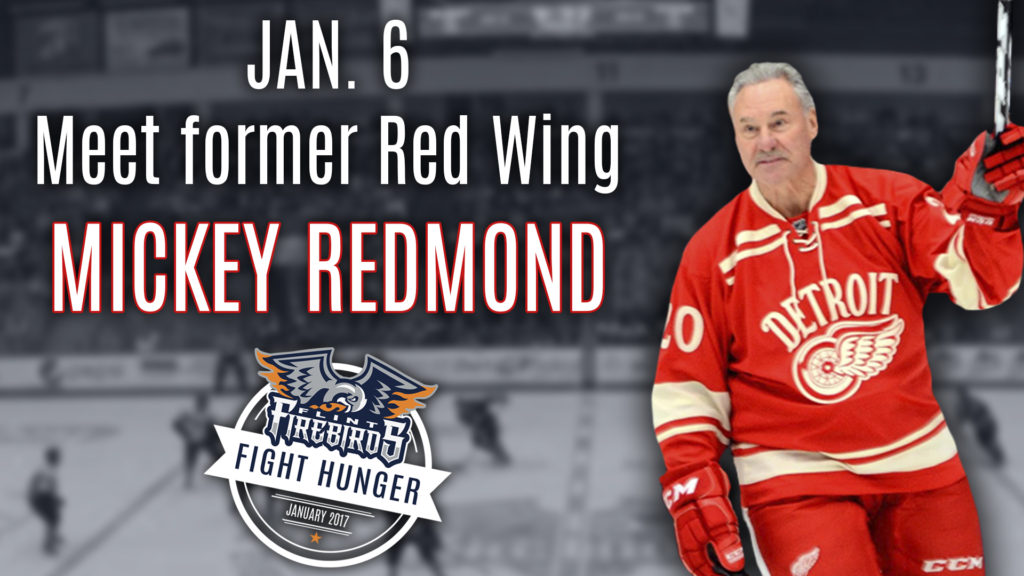 Flint, Mich. – The Flint Firebirds return home to the Dort Federal Event Center Friday, Jan. 6 to host the Erie Otters and fans will be treated to a special guest appearance from Mickey Redmond, a former player and now TV Analyst on FOX Sports Detroit for the Detroit Red Wings.

NHL Hall of Famer, Redmond, a two-time 50-goal scorer for the Red Wings will be in attendance for an autograph session on the arena concourse from 6-7:30 p.m. The autograph session is available to all fans with a suggested $5 donation to the Firebirds Charitable Foundation.

Mickey Redmond played for the Montreal Canadiens from 1967-71, winning Stanley Cups in 1968 and 1969. In 1972-73, Redmond became the seventh player in NHL history and the first Red Wing player to score 50 goals in a season. He then became only the third player to achieve back-to-back 50-goal seasons 51 scored during the 1973-74 season.

A native of Kirkland Lake, Ont., Redmond played in the Ontario Hockey League from 1963-67 with the Peterborough Petes organization. He amassed 268 points (136G, 132A) in 201 games before playing his first season in the NHL in 1967.

Notes: Parking at the Dort Federal Event Center has been reduced to $5 for the remainder of the season and one lucky fan will always have the chance to shoot for $10,000 during the second intermission at all Firebirds’ home games.