In the trade, the Firebirds receive defenseman Ryan Bangs from the Knights in exchange for Sudbury’s third-round pick in the 2019 OHL Draft.

“We are extremely excited to be adding Ryan to our hockey club,” said Flint Firebirds Vice President of Hockey Operations & General Manager Barclay Branch. “Ryan is a player that possesses speed, skill, passion and a high compete level. We look forward to having Ryan play a key role for the Firebirds moving forward.”

Bangs, 18, was a third-round selection (61st overall) in the 2016 OHL Draft by London, while in the midst of the Knights’ MasterCard Memorial Cup championship season. Bangs recorded 23 points (8G, 15A) in 33 games last season with the St. Thomas Stars of the Greater Ontario Junior Hockey League (GOJHL). He was a first-round (2nd overall) pick of the Carleton Place Canadians in the 2015 Central Canada Hockey League (CCHL) Bantam Protected Draft. In seven OHL games with London, the defenseman recorded two assists and a plus-1 rating during the 2017-18 season. 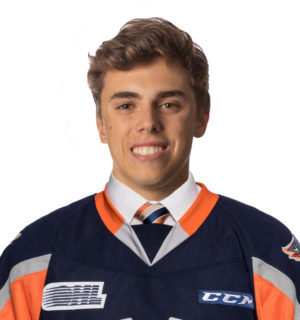 “I’m really excited for the opportunity in Flint,” said Bangs. “I’ve heard nothing but good things about the Firebirds’ organization. I’ve heard the city is really nice and the guys in the locker room are great to be around. I’ve already looked at Flint’s facilities online and they look amazing. I’m really looking forward to the opportunity.”

The 5-foot-10, 175-pound defenseman hails from the Ottawa region in Stittsville, Ont. Bangs was a member of Team Hockey Eastern Ontario, which claimed the bronze medal at the 2016 OHL Gold Cup. During his Major Bantam year with the Ottawa Valley Titans AAA hockey team, Bangs led all defenseman in goals in the Ontario East Hockey League (OEHL), now called Hockey Eastern Ontario (HEO), recording 32 points (11G, 21A) in 30 games played. Bangs was then called up to the Titans Minor Midget team to play in the prestigious OHL Cup as an underage player.

Bangs will join the Firebirds Tuesday afternoon and will wear #94 in Flint this season.

The Firebirds will return to the Dort Federal Event Center for the 2018-19 OHL regular season Opening Night on Saturday, Sep. 29. Puck drop is set for 7 p.m. against the London Knights. The Firebirds are encouraging all fans to wear orange as everyone in attendance will receive an orange rally towel, compliments of Dort Federal Credit Union.

Opening night and all 34 individual game tickets tickets for the Firebirds’ 2018-19 season are on sale now and can be purchased online at ticketmaster.com here. Single game tickets are $12 for bronze, $16 for silver, $20 for gold and $26 for VIP seating.