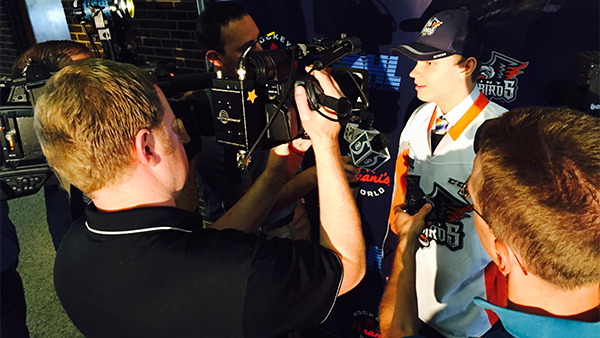 Saarijärvi, a native of Rovaniemi, Finland, was drafted by the Detroit Red Wings in the 3rd round of the 2015 NHL Draft (73rd overall) prior to being selected by the Firebirds in the 1st round (9th overall) of the CHL Import Draft on June 30 and will play in Flint for the 2015-16 season.

“I want to thank the Firebirds organization for picking me in the [CHL] Import Draft and giving me an opportunity to play in one of the best hockey leagues in the world,” said Saarijärvi. “This is a first class organization and I could not be more excited to play in a hockey city like Flint.”

After skating in the Red Wings development camp in Traverse City, Mich. in July, Saarijärvi competed with the U-20 Finnish National Team against the United States and Sweden national programs in Lake Placid, NY in early August.

Flint Firebirds General Manager Terry Christensen said, “the Detroit Red Wings scouting history, especially in Europe, has been second to none. Given that they felt good enough about Vili’s abilities as a player and his character and that he could potentially play for their club one day, shows a stamp of approval on a player that we were highly interested in.”

Saarijärvi signed a three-year, entry-level contract with the Red Wings on July 3, 2015 and will skate in the Detroit Red Wings Training Camp and the NHL Prospects Tournament at Centre Ice Arena in Traverse City, from Friday, Sept. 11 to Tuesday, Sept. 15.

“Our goal with Vili is the same as every player on our roster, and that’s doing everything that we can, to provide an environment for him to develop and reach the goals that he set for himself in the game of hockey,” added Christensen.