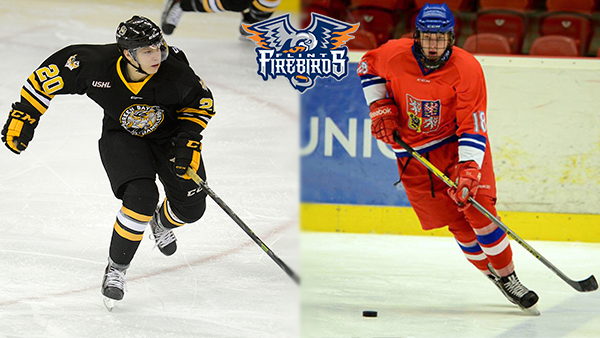 Saarijarvi, a native of Rovaniemi, Finland, is a 3rd round draft pick of the Detroit Red Wings (NHL) and played for the Green Bay Gamblers in the United States Hockey League (USHL) last season.

“We’re very, very excited to have been able to draft him in our import draft today,” said Christensen. “I had an opportunity to go to the U18 world championship and watch Vili play and he had a great tournament.”

“I talked to Vili afterward and we expressed to him how excited we were to have been able to draft him,” added Christensen. “He was very excited that we drafted him and looks forward to having an opportunity to play in the Ontario Hockey League with the Flint Firebirds.”

Kantner, a native of Plzen, Czech Republic played for HC Plzen U18 last season and recorded 46 points in 42 games. Kantner was also a member of the U17 Czech Republic National Team Development Program scoring two goals while adding an assist for three points in three games played.

“We were looking for a player that could add offense to our lineup before the draft and we ended up being really fortunate to have the opportunity to select Kantner,” said Christensen. “Last year, he scored over a point a game for his team and we think that will translate into offensive output here in Flint.”

Firebirds season tickets for the 2015-16 inaugural season are currently on sale and can be purchased at the Dort Federal Credit Union Event Center Box Office, Monday thru Friday from 9 a.m. to 5 p.m. (ET). More information on season tickets can be found at FlintFirebirds.com or by calling Mary Nagy at the Perani Box Office at (810) 744-0580. Individual game tickets will go on sale Friday, Aug. 7, at 10 a.m. (ET). Opening night is Saturday, Sep. 26, at 7:30 p.m. (ET) versus the Saginaw Spirit.