Preview: Flint travels to Saginaw for game 5 of I-75 Divide Cup Wednesday 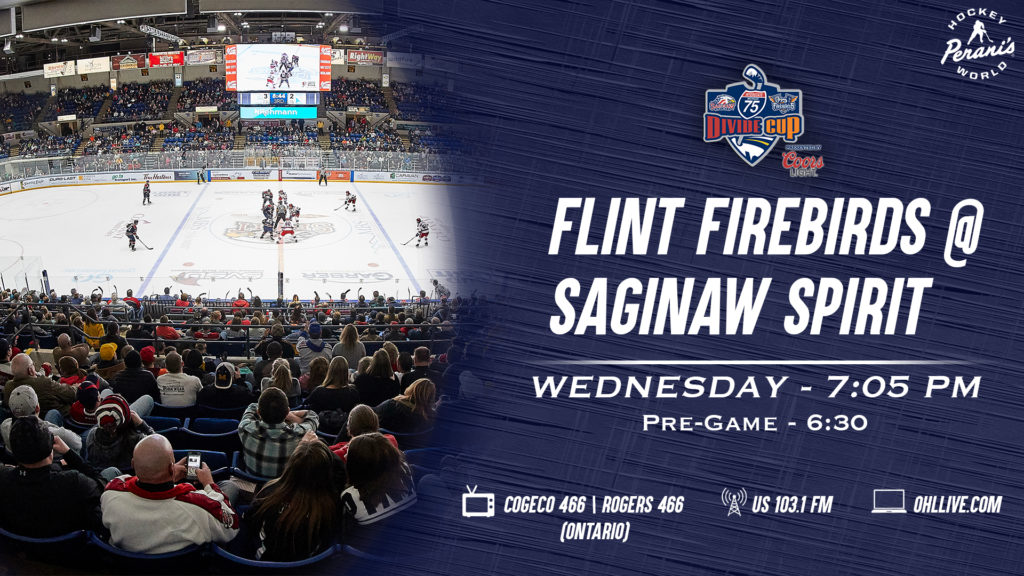 Flint, Mich. – The Firebirds will face in-state rival the Saginaw Spirit twice in a home-and-home series. First, they travel north on I-75 Wednesday before playing a rematch in Flint Friday. Puck drop versus the Spirit is set for 7:05 p.m. (ET) at the Dow Event Center (cap. 5,500) in Saginaw.

Saginaw carries a record of 23-11-2-2 and ranks second in the West Division. Flint’s record stands at 20-15-1-0, ranking them third in the West Division. In the 10-team Western Conference, Saginaw is seeded third and the ‘Birds are currently sixth. The Spirit are 14-6-0-2 on home ice compared to Flint’s 7-8-0-0 record in away games. The Firebirds have gone 4-5-1-0 in their last ten games and Saginaw went 8-2-0-0. The Spirit have won their last five consecutive home games.

Saginaw now holds a 3 – 1 lead in the season series heading into game five Wednesday night. All-time, Flint is 11-23-0-2 against the Spirit and 5-13-0-0 at the Dow Event Center. For the fifth consecutive season, the team who wins the most regular-season meetings between the two clubs will take home the coveted I-75 Divide Cup, sponsored by Coors Light. In each of the first two seasons, the Cup remained in Flint. The Spirit claimed the Cup the last two seasons, thus tying the Cup series at two wins each heading into this year.

Friday night marks the fifth of eight regular-season meetings annually between these clubs, and the third of four in Saginaw. When these clubs met in Saginaw on September 21, the Firebirds scored four unanswered goals to spoil their in-state rivals’ opening night. Since then, the Spirit have won three straight including two wins in Flint. Two of the Spirit’s three victories were determined by a single goal. Leading the offensive charge for Flint through the four meetings this season are Connor Roberts (1G, 5A) and Brennan Othmann (3G, 3A) with six points each. Cole Perfetti tops all Spirit players with seven points (5G, 2A) against the ‘Birds this year.

On special teams, the Spirit rank 18th with the man-advantage, converting on 18.5% of their opportunities. The Firebirds are scoring at a 16.0% clip on the power play. When shorthanded, Saginaw has the seventh-best penalty kill (PK) at 80.3%. The Firebirds PK continues to climb the rankings, now killing penalties at a rate of 81.3% which ranks fifth in the league.

Flint Firebirds (20-15-1-0, 3rd West Division):
Belarusian forward Evgeniy Oksentyuk tops the club with 17 goals and 25 assists for 42 points in 31 contests. He’s currently on a 13-game point streak (9G, 14A), just one game shy of the Firebirds’ record of 14 games held by Kole Sherwood.

Defenseman Riley McCourt recently surpassed former Firebird Matt Henderson for most goals scored by a defenseman in a Firebirds’ uniform with 21 pots in the orange and navy blue. McCourt’s 85 total points with Flint are just five shy of tying the record for all-time points by a Firebirds’ rearguard. For this season, McCourt is second in total offense with 11 goals and a team-high 29 assists for 40 total points in 36 games. His total points are fourth-most among OHL rearguards, his 11 tallies are tied for fifth, and his 29 helpers are fourth. McCourt is on a six-game point streak, during which he has one tally and ten assists.

Behind McCourt is a trio of defenders with NHL ties. The newest addition to the blue-line troops is Tyler Tucker (St. Louis Blues). Tucker has eight goals and 21 assists for 29 points through 28 games played. Vladislav Kolyachonok (Florida Panthers) and Dennis Busby (Arizona Coyotes) each have 18 points. Kolyachonok has eight goals and ten helpers through 28 games-played and Busby has five goals and 13 assists in 36 games.

Jake Durham ranks fourth in scoring for the ‘Birds with 14 goals and 17 assists on the season. He currently has 67 career goals, tying him with former Firebirds’ forward Nick Caamano for third-most in franchise history.

Brennan Othmann tops the Firebirds’ rookie class and ranks inside the top-10 among all OHL rookies in several categories. His eight goals are tied for seventh-most and his 18 total points are tenth among the OHL’s freshman class.

Between the pipes, Anthony Popovich has played in 26 games this season. He’s earned 14 victories, which are tied for the fourth-most in OHL. His goals-against average (GAA) is 3.62 and he has the seventh best save-percentage (SAV%) in the league at .901. Luke Cavallin has six wins in 13 appearances, and he carries a 3.83 GAA with a .896 SAV%.

Saginaw Spirit (23-11-2-2, 2nd West Division):
Cole Perfetti leads the Spirit in both assists (41) and total points (63). He ranks third in the OHL in both categories. Perfetti is considered a top-prospect and is projected to be a first-round pick in the upcoming NHL Draft, and he’s currently on an eight-game point streak (7G, 11A). Cole Coskey (New York Islanders) ranks second on the club with 47 total points (19G, 28A). Damien Giroux (Minnesota Wild) is third with 41 points, including a team-high 24 tallies which is tied for the ninth-most goals-scored in the OHL. Giroux is also tied for the most insurance goals in the league with five this season.

Saginaw’s top defender on the score sheet is Ilya Solovyov, who has three goals and 25 assists in 29 games. First-year forward Ethan Cardwell tops the freshman class for Saginaw with 12 goals and nine assists through 36 games-played. His 19 points are tied for eighth-most among all rookies, and his 12 goals are tied for third-most.

In net, Marshall Frappier has now appeared in 19 games this season, logging 13 victories and earning a 3.10 GAA with a .889 SAV%. His 13 wins are tied for seventh-most and his GAA is sixth-best in the league. Frappier has two shutouts this campaign, and only two OHL netminders have more. Tristan Lennox has made 20 appearances, earning ten wins and a .874 SAV% with a 3.70 GAA.

Broadcast Coverage:
Wednesday evening’s contest in Saginaw can be heard live on the radio throughout Flint & Mid-Michigan on US 103.1 FM, online at www.us103.com or by downloading the US 103 app here. Dominic Hennig will call the play-by-play action and Jack Sznewajs will provide color commentary on the Firebirds Hockey Radio Network. Pregame coverage will begin 30 minutes prior to puck drop at 6:30 p.m. Wednesday evening from Saginaw, Mich.

Through Saginaw’s partnership, the game will also be televised on a tape-delayed basis throughout Mid-Michigan on Sunday, January 12 at 8 p.m. (ET) on WNEM-TV5 Plus. The channel can be found on 5.2 via antennae over the air, channel 199 for Charter Cable subscribers and channel 4 for Comcast/Xfinity cable subscribers.

Next Home Game:
The Firebirds host the Spirit back in Flint Friday night. Puck drop is set for 7:00 p.m. (ET) at the Dort Federal Event Center. The game marks another of the ‘Firebirds 4 Pack Fridays,’ sponsored by Little Caesars Pizza! Here’s the deal: Fans can get 4 tickets, 4 hot dogs and 4 soft drinks starting at just $60:

Firebirds 4 Pack packages are only available for Friday games in advance of game day. For more information, contact the Dort Federal Event Center Box Office by calling (810) 744-0580 or email mary@dorteventcenter.com.