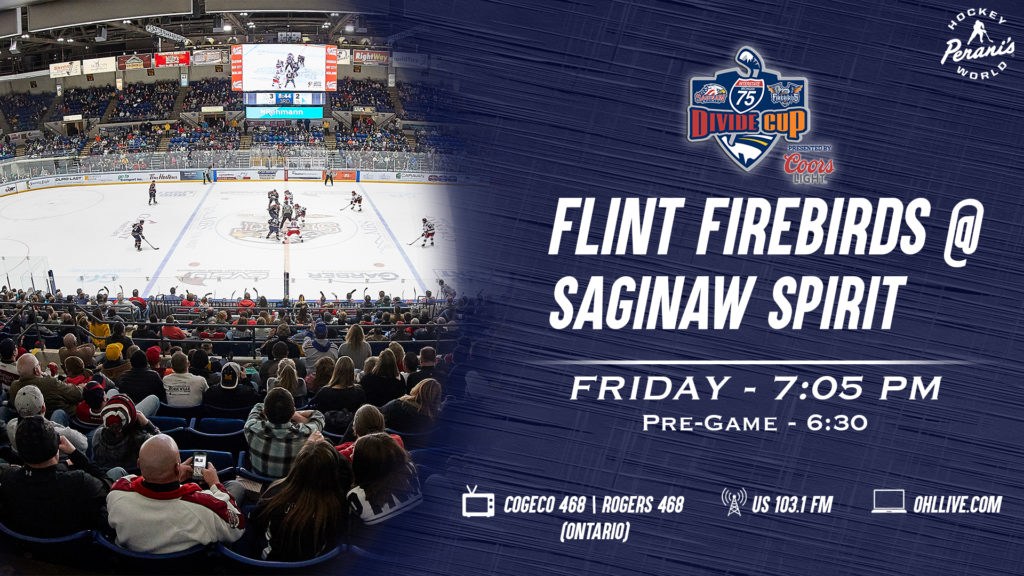 Saginaw, Mich. – The Firebirds will play their first of back-to-back games this weekend and attempt to extend their longest overall and road-game winning streaks ever versus their in-state and division rival Saginaw Spirit Friday night. Game 7 of the I-75 Divide Cup, sponsored by Coors Light, is set for 7:05 p.m. (ET) at the Dow Event Center (cap. 5,500) in Saginaw.

Friday night marks the seventh of eight regular-season meetings annually between these clubs, and the fourth of four in Saginaw. Saginaw currently holds a 4 – 2 lead in the season series heading into game seven Friday night. In the first game of the series this season, the Firebirds scored four unanswered goals to spoil their in-state rivals’ opening night. After that, the Spirit won three straight including two wins in Flint. Then the Firebirds won 6 – 5 on Jan. 8 in Saginaw. Two nights later, the Spirit skated to a 7 – 5 victory in Flint.

The Firebirds enter Friday’s contest in second place in the West Division and fourth in the Western Conference with a record of 32-17-1-1 (66 points). The ‘Birds are currently the second-highest scoring team in the 20-team OHL, having found the back of the net 220 times. Flint is also riding two franchise-best winning streaks. They’ve won seven consecutive road games and their last 10-straight overall. Currently, the Firebirds are tied for the most regular-season victories in team history (32) and they’ve already established a new record for most goals scored on the road in a campaign at 119, which is tops in the league. On the road this season, the ‘Birds are 15-9-0-1, which is also a new franchise-best.

All-time, Flint is 13-23-0-2 against the Spirit and 6-13-0-0 at the Dow Event Center in Saginaw. For the fifth consecutive season, the team who wins the most regular-season meetings between the two clubs will take home the coveted I-75 Divide Cup, sponsored by Coors Light. In each of the first two seasons, the Cup remained in Flint. The Spirit claimed the Cup the last two seasons, thus tying the Cup series at two wins each heading into this year. Should the season series finish tied at four wins each, the total goals-scored will determine the ultimate winner.

Flint Firebirds (32-17-1-1, 2nd West Division):
Ty Dellandrea (Dallas Stars) tops the stat sheet for Flint with a team-leading 30 goals plus 34 helpers for 64 points in 41 games-played. He rides a three-game point-streak (2G, 2A) into Friday’s contest. He holds the franchise records for having the most goals (92), assists (118), points (210), game-winning goals (12), shots on goal (721), and he’s now tied with former Firebird Nick Caamano for a club-high 22 power-play tallies. As a centerman, Dellandrea has won the sixth-most faceoffs in the OHL this season with 568.

Belarusian forward Evgeniy Oksentyuk sits second on the club with 25 goals and a team-high 37 assists for 62 points in 46 contests. He rides an eight-game point-streak (4G, 10A) into Friday’s tilt. Earlier this season, Oksentyuk raised the bar for point-streaks, getting at least one point in 17 consecutive games (13G, 16A), which is the longest in Flint history and the fourth-longest by any OHL player this season.

Riley McCourt holds several franchise records among Firebirds’ defensemen, including most goals in a single season (16), most career goals (26) and career points (96). He is also tied with former Firebird Matt Henderson for the most assists by a rearguard at 70. This season, McCourt ranks third in total offense with 16 goals and 35 assists for 51 total points in 51 games. His total points are fifth-most among OHL rearguards, his 16 tallies are tied for fourth, and his 35 helpers are fifth. McCourt also has the seventh-highest points-per-game average among blue-liners at 1.00.

Overage forward Jake Durham is ranks fourth on the squad with 18 goals and 28 assists. He already owns the record for most games-played by any Flint Firebirds’ player (253). Durham ranks third all-time in goals-scored for the franchise with 71. Ryan Moore is the former Firebird who ranks second (behind Dellandrea) with 72.

Four other Flint players find themselves on point streaks entering Friday’s tilt. Cody Morgan and Connor Roberts are each riding a seven-game point streak. Morgan has two goals and seven assists in that time, and Roberts has three tallies with four helpers. Ethan Keppen (3A) and Brennan Othmann (2G, 1A) are each on three-game point streaks. Of note, Jack Wismer his five goals and six total points in his last four games.

Defenseman Tyler Tucker (St. Louis Blues) joined the Firebirds at the trade deadline this season. Since then, he has 12 points (5G, 7A) in 15 games. For the season, he ranks inside the top-ten among OHL blue-liners with 13 tallies (9th) and a .95 points-per-game average (9th).

Brennan Othmann leads the freshman class for the ‘Birds with 27 total points (13G, 14A) through 43 games. His point-total is ninth among rookies in the league, his 13 goals are sixth-most, and his .63 point-per-game is the tenth-highest. Othmann sits tied with Dellandrea for the most-ever goals (13) by a rookie for Flint.

In net, Anthony Popovich has played in 36 games this season. He’s earned 22 victories, which are the most by any Flint netminder in a single season and the sixth-most among OHL netminders this season. Popovich’s goals-against average (GAA) is 3.64 and he he’s tied for the ninth-best save-percentage (SAV%) in the league at .898. Luke Cavallin has ten wins in 19 appearances and carries a 3.67 GAA and a .893 SAV%. Cavallin recently became Flint’s all-time leader in minutes-played (4,422) and saves (2,273) by a Firebirds’ netminder. He is now one win away from tying former Firebirds’ goalie Garrett Forrest for most career wins (25) by any Firebirds’ netminder.

Saginaw Spirit (33-15-2-2, 1st West Division):
Cole Perfetti has played in 51 games this season and leads the Spirit in both assists (62) and total points (92). He ranks second in the OHL in both categories. Perfetti is considered a top-prospect and is projected to be a first-round pick in the upcoming NHL Draft. Cole Coskey (New York Islanders) ranks second on the club with 67 total points (29G, 38A). Damien Giroux (Minnesota Wild) is third with 57 points, including a team-high 33 tallies which is the ninth-most goals-scored in the OHL. Giroux is also tied for first in the OHL with eight game-winning markers.

Ryan Suzuki (Carolina Hurricanes) has 22 points (8G, 14A) in 13 games since joining the Spirit at the trade deadline this season. He’s on a six-game point streak (4G, 6A).

Saginaw’s top defender on the score sheet is DJ Busdeker, who has 16 goals and 24 assists. Busdeker is tied for the first in the OHL with six short-handed tallies, and his 16 goals are fourth-most among rearguards. First-year forward Mitchell Smith tops the freshman class for the Spirit with seven goals and six assists through 46 contests.

Broadcast Coverage:
Friday evening’s contest can be heard live on the radio throughout Flint & Mid-Michigan on US 103.1 FM, online at www.us103.com or by downloading the US 103 app here. Firebirds’ broadcaster Dominic Hennig will call the play-by-play action and Jack Sznewajs will provide color commentary on the Firebirds Hockey Network. Radio pre-game coverage begins 30 minutes prior to puck drop at 6:30 p.m.

Through Saginaw’s partnership, the game will also be televised on a tape-delayed basis throughout Mid-Michigan on Sunday, February 16 at 6 p.m. (ET) on WNEM-TV5 Plus. The channel can be found on 5.2 via antennae over the air, channel 199 for Charter Cable subscribers and channel 4 for Comcast/Xfinity cable subscribers.

Next Home Game:
Get tropical with the Flint Firebirds Saturday, Feb. 15 when the club takes the ice for the fifth-annual “Flint Tropics Night,” sponsored by Diamond Resorts International. Puck drop is set for 7 p.m. (ET) against the Guelph Storm at the Dort Federal Credit Union Event Center.

If the Firebirds score 125 goals in the game, everyone in attendance gets a FREE corn dog! Inspired by the movie “Semi-Pro” starring Will Ferrell, the Firebirds will be wearing special themed jerseys, pants and socks throughout the game that are sure to impress everyone in attendance. Immediately following the game, there will be a live jersey auction, giving fans an opportunity to take home the game-worn Flint Tropics jersey of their choice. Proceeds will be donated to the Firebirds Charitable Foundation which benefits local youth organizations throughout Flint, Genesee County and Mid-Michigan.

The first 500 fans through the doors will receive FREE Firebirds’ branded sunglasses, compliments of PFCU and Dort Financial Credit Union will be giving away FREE tropical themed coozies. Additionally, special video clips from the movie Semi Pro, tropical themed music, Flint Tropics merchandise and many more fun and entertaining elements will take place throughout the night.