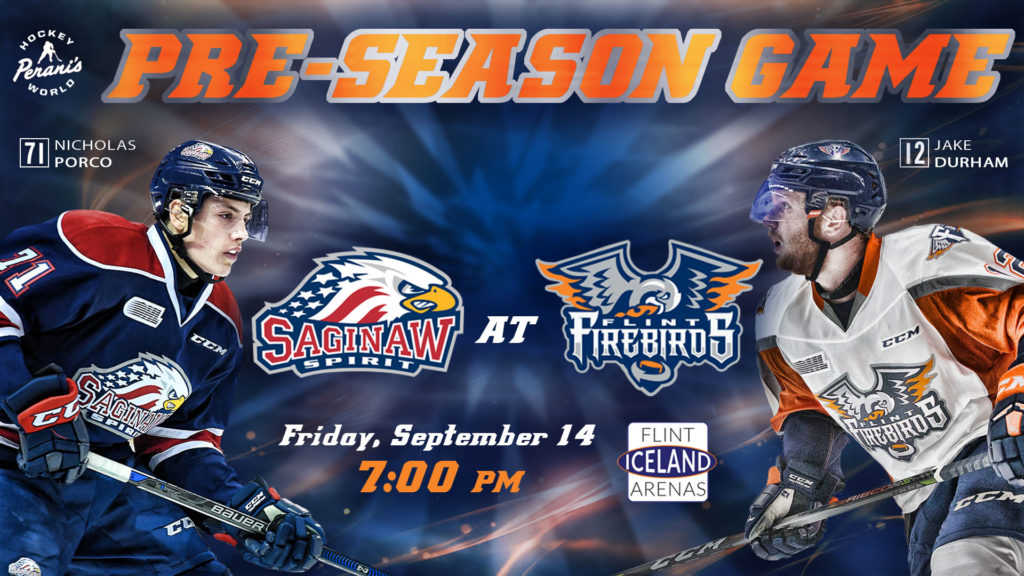 Flint, Mich. – The Firebirds will play their only home pre-season game of the year Friday night when the club hosts their in-state rivals, the Saginaw Spirit. The contest will take place at Flint Iceland Arenas on Elms Rd. in Clayton Township. Puck drop is set for 7 p.m. (ET). Tickets are free for all Firebirds’ season ticket holders. Parking is free for all fans. General admission seating is $10 and can be purchased in advance at the Dort Federal Event Center Box Office, Iceland Arena’s or online at ticketmaster.com here.

Fans are encouraged to bring their skates and helmets as there will be a free “skate with the team” opportunity immediately following the game. Rental skates will be available for $3 for those without skates. Players along with team mascot, Hot Wing, will be available to meet and greet, sign autographs and pose for pictures during the public skate.

The Firebirds dropped the puck on the 2018-19 pre-season with three games in three days at the HarborCenter in Buffalo, NY earlier this month as part of the 2nd Annual OHL Pre-Season Showcase. Flint won two of the three contests, defeating the defending OHL Playoff Champions Hamilton Bulldogs (Highlights) and the Erie Otters (Highlights) before falling to the Windsor Spitfires on the final day. The Spirit also opened their pre-season in a three-game pre-season showcase in Kitchener, Ont. They were successful in all three contests, defeating the North Bay Battalion, the host Kitchener Rangers and the Moncton Wildcats of the Quebec Major Junior Hockey League (QMJHL).

The Spirit and Firebirds will play back-to-back games this weekend, the second of which will be in Saginaw at the Dow Event Center on Saturday.

The Spirit finished the 2017-18 regular season ranked eighth in the Western Conference standings. They were knocked out of the playoffs, going winless in four games versus the Soo Greyhounds. These two squads will meet eight times during the regular season, with the team who wins more head-to-head matches earning the coveted Coors Light I-75 Divide Cup. Flint won the I-75 Divide Cup during both the 2015-16 and 2016-17 regular seasons, but Saginaw took home the hardware last campaign.

A native of Aurora, Ont., Vierling recorded 63 points (27G, 36A) in 33 games last season with the York Simcoe Express Minor Midget AAA hockey team in the Eastern Toronto Area Hockey League (ETAHL). He also finished third in points among 375 skaters last March in the 2018 OHL Cup powered by Under Armour. He scored five goals and added five helpers for 10 points, in addition to recording four game-winning goals in just six games played. Vierling was also one of six players named to the 2018 Gatorade OHL Cup All-Star Team. He came out on top with a tournament-high 63 face-offs, winning 57.8% in the circle. Vierling has one assist this pre-season.

Michael Bianconi: Drafted in the third round (48th overall) of the 2018 OHL Priority Selection, Bianconi is the lone incoming defender on the Flint squad. He hails from Toronto, Ont. and skated with the Canadiens in the OHL Cup Championship last march. Last season, he recorded 31 points (5G, 26A) in 57 games with the Toronto Jr. Canadiens (GTHL). He averaged an impressive point per game in the 2018 OHL Cup powered by Under Armour, with three goals and four assists in seven games. He was one of six players named to the Gatorade OHL Cup All-Star team, along with Vierling.

Jacob Winterton: After being selected by the Firebirds in the 10th-round (189th overall) of the 2017 OHL Priority Selection, Winterton led the prominent 23-team Midget Ontario Minor Hockey Association (OMHA) with 33 goals scored during the 2017-18 regular season. In total, he recorded 52 points (33G, 19A) in 33 games with the Ajax/Pickering Raiders Midget AAA Hockey Club. He also played a key role in helping the Raiders capture the Gold Medal in the 2018 OMHA playoffs, notching eight points (5G, 3A) in seven post-season games. Jacob was also named the Eastern AAA Hockey League (ETAHL) OMHA All Star Game MVP. In three pre-season games this year, Winterton has one assist.

Eric Uba: Uba played in four games with the Firebirds last season, picking up his first OHL point with an assist, and earning seven shots on goal. He hails from Kitchener, Ont. and played with the Wellington Dukes and the Oakville Blades, both of the OJHL, during the 2017-18 season. With the Dukes, he earned 22 points (9G, 13A) in 39 games. After the trade to Oakville, Uba produced six goals and added six helpers for 12 points in 12 games. Flint drafted Uba in the 2016 OHL Priority Selection. Uba has a goal and an assist thus far this pre-season.

Between the Pipes: A season ago, Luke Cavallin was a first-year backup netminder to overager, Garrett Forrest. This season, the more experienced Cavallin and newly acquired veteran Emanuel Vella (Mississauga) are expected to backstop the Firebirds in goal. Last season, Cavallin appeared in 31 games and posted a 4.19 goals-against average (GAA) and a .872 save percentage (SAV%). Cavallin was the highest drafted goaltender in the 2017 OHL Priority Selection. Vella made 32 appearances a season ago, finishing with a 3.27 GAA and a .896 SAV%. The London Knights originally drafted Vella 47th overall (3rd round) in the 2014 OHL Priority Selection. Evan Morrison is the third goaltender for Flint this pre-season. He played just over 32 minutes against the Windsor Spitfires on September 2, making nine saves on 13 shots. Morrison was drafted by the Firebirds in the 2016 OHL Priority Selection.

NHL: The Firebirds have three players with NHL ties. Center Ty Dellandrea was selected 13th overall in the first round of the 2018 NHL Draft by the Dallas Stars, making him the highest draft pick to date from the Flint organization. Defensemen Fedor Gordeev was selected by the Toronto Maple Leafs in the fifth round of the 2017 NHL Draft and Dennis Busby was selected by the Arizona Coyotes in the fifth round of the 2018 NHL Draft. Additionally, five other Firebirds’ players attended NHL Camps over the summer, including Hunter Holmes (Philadelphia Flyers), Riley McCourt (Dallas Stars), Hakon Nilsen (New York Islanders), Connor Roberts (Pittsburgh Penguins) and Emanuel Vella (New York Islanders).

Cole Perfetti was taken fifth overall in the first round of the 2018 OHL Priority Selection. The Whitby, Ont native played most of last season with the Vaughan Kings Minor Midget AAA of the GTHL. He scored 52 goals and added 73 helpers for a total of 125 points in just 65 games. He also picked up six points in five games with the Whitby Fury of the OJHL a year ago. So far, he has one point in three pre-season games with the Spirit.

Camaryn Baber was the Spirit’s third-round selection in the 2017 OHL Priority Selection. He appeared in 11 games with Saginaw last season, earning a goal and two assists. The Sault Ste. Marie, Ont native played with the Soo Thunderbirds of the NOJHL last season, racking up 46 points in 46 games.

Mason Millman is a defenseman who hails from London, Ont, and was the Spirit’s seventh-round pick in the 2017 draft. In 46 regular-season appearances with the St. Thomas Stars of the GOJHL last season, he scored six goals and added 22 helpers for 28 points in 46 contests. He also added ten assists in 16 playoff games for the Stars. In three pre-season contests this season, Millman has one goal and is a +1.

Between the Pipes: Ivan Prosvetov, from Moskva, Russia, was the 13th overall selection in the 2018 OHL Import Draft. He was also selected by the Arizona Coyotes in the fourth round of the 2018 NHL Draft. Last season, in 36 regular-season appearances with the Youngstown Phantoms of the USHL, Prosvetov posted a 2.90 goals-against average (GAA) and a save percentage (SAV%) of .913. He also played in 11 playoff games, improving to a 2.58 GAA and a .921 SAV%. Returning goaltender Cameron Lamour appeared in 17 contests with the Spirit last season, posting a 4.16 GAA and a .867 SAV%. In two preseason contests this season, Lamour has made 29 saves on 30 shots, earning a .967 SAV%. Rookie netminder Tristan Lennox was Saginaw’s second-round pick in the 2018 OHL Priority Selection. In one pre-season game this year he made 22 saves on 26 shots for a .846 SAV%.

Fans do not want to miss Opening Night as the club currently holds a 3-0 record in ‘home openers’ through their first three seasons in the OHL. Flint earned a 3-2 shootout victory over the Saginaw Spirit in the inaugural season before posting a 4-0 win over the Spirit in September of 2016. The Firebirds then notched an exciting 5-4 overtime victory over the Ottawa 67’s in last season’s opener.

Broadcast Coverage:
Friday evening’s pre-season game is the only time this season that there will not be radio or television coverage for a Flint Firebirds hockey game. However, Saturday evening’s contest in Saginaw can be heard live on the radio throughout Flint & Mid-Michigan on US 103.1 FM, online at www.us103.com or by downloading the US 103 app here. Dominic Hennig will call the play-by-play action on the Flint Firebirds Hockey Radio Network. Pregame coverage will begin 30 minutes prior to puck drop at 6:30 p.m.

Despite the majority of Flint Firebirds games being televised province-wide throughout Ontario this season, there will be no TV coverage for either game this weekend. During the season, OHL fans with cable television in Ontario can add the OHL Action Pak to their television plan to catch the Firebirds in action, home or away all season long. Last season, 65 of the Firebirds’ 68 games were televised live across the province of Ontario on the OHL Action Pak.

All Flint Firebirds home and away games throughout the 2018-19 season can be watched anywhere in the world online on www.ohllive.com or on the OHL Live app. OHL Live is a league video streaming platform that delivers high quality live and on-demand coverage of all regular season and playoff games annually. The cost is $6.99 per game, $69.99 for Flint Firebirds away games only, $179.99 for all 68 home and away Firebirds games and $279.99 for all 1,360 OHL games throughout the 2017-18 season.