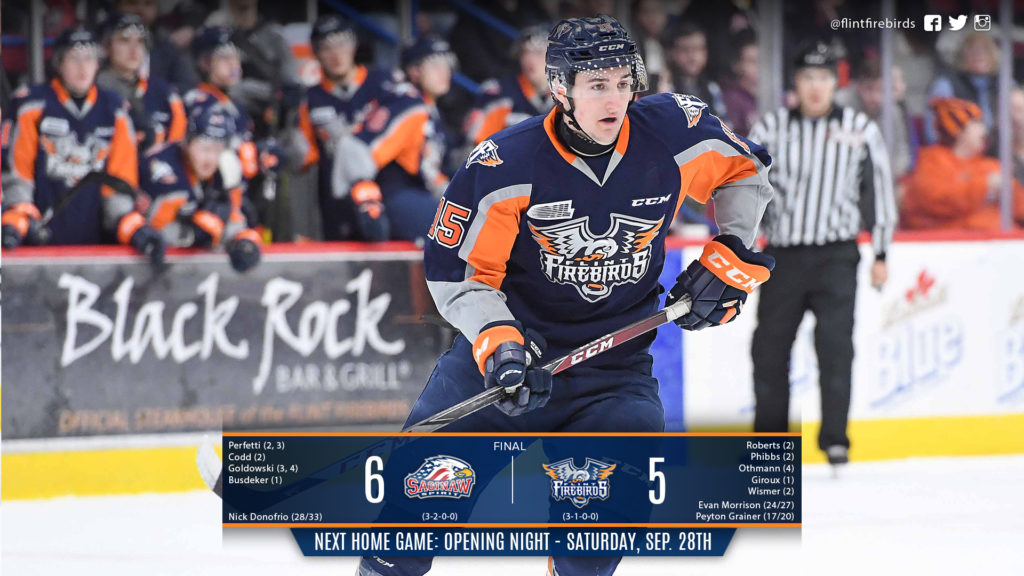 Flint, Mich. – For the second night in a row, the Firebirds didn’t quit, scoring three unanswered goals in the third period to tie the contest 5-5 in front of a sold out crowd at the official practice facility of the Firebirds, Flint Iceland Arenas. However, Saginaw would pull out a 6-5 victory in the final preseason contest. Brennan Othmann continued his point-streak, finding the scoresheet in all four preseason games, Emmet Pierce had three assists and both Peyton Grainer and Evan Morrison split time between the pipes.

Next up for Flint, the Firebirds will begin the 2019-20 OHL Regular Season on the road this Friday against the Sault Ste. Marie Greyhounds. The Firebirds’ home opening night is Saturday, September 28th against the Niagara IceDogs. Puck drop is set for 7 p.m. (ET) at the Dort Federal Credit Union Event Center.

Perfetti scored the next two goals for Saginaw. First, four minutes later, he tied the contest on a skilled shot from the middle of the right circle, shortside over Evan Morrison’s left shoulder. DJ Busdeker was credited with the assist. Then, while on the power-play, he found twine from the the slot, blockerside with 7:46 remaining.

Flint tied the contest with 3:25 remaining on a perfect shot from Jack Phibbs at the top of the right circle, over the right shoulder of Saginaw netminder Nick Donofrio. Riley McCourt and Connor Roberts were credited with the assists.

Saginaw’s David Codd regained the lead for the Spirit with 1:13 remaining, scoring from the right circle.

The Spirit scored the only two goals of the second period. First, Jake Goldowski found the back of the net on the power-play with 4:32 remaining. 1:09 later, a Firebirds’ turnover in the offensive zone led to a shorthanded goal for DJ Busdeker. It was 5-2 after two.

Flint scored the next three to tie the contest, 5-5. First, Othmann scored on the power-play from the right circle off a pass from McCourt 17 seconds into the third period. 1:53 later, Zacharie Giroux made a nice deke in front to score to bring the Firebirds within one. Then, Jack Wismer tied the game at 4:23 of the third period.

Saginaw’s Goldowski scored his second of the night, pouncing on a loose puck on the right side of the net at 6:25 of the third period for the game-winning goal.