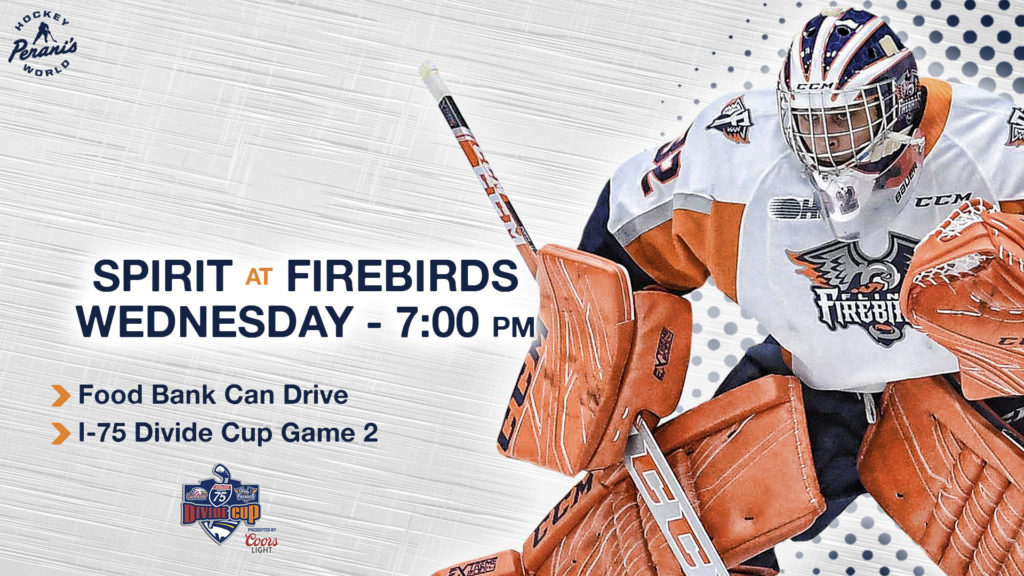 Flint, Mich. – The Firebirds and Saginaw Spirit will meet this Wednesday night when the two clubs face-off at the Dort Federal Credit Union Event Center and great promotions are available for fans! Puck drop is set for 7 p.m. (ET) for game two of the I-75 Divide Cup, presented by Coors Light.

In partnership with the Foodbank of Eastern Michigan, fans can bring in five non-perishable food items to the Firebirds’ merchandise store, The Birds Nest, at the Dort Federal Event Center for a complimentary sponsored Silver Level ticket, courtesy of Little Caesars. Additionally, the Firebirds offer amazing deals for all of their weekday home games featuring $2 beers, hot dogs, popcorn and sodas! Everyone in attendance will receive a pair of thunderstix, compliments of Dort Federal Credit Union.

On-the-ice, Flint posted a 4-1 victory in Saginaw in game one of the I-75 Divide Cup on Sep. 21 (Watch Highlights). The Firebirds are off to their best start in franchise history with a 15-8-0-0 record overall and a 10-3-0-0 record on home-ice. Flint will enter Wednesday’s contest as winners of their last two games and in third-place in the OHL’s Western Conference. Saginaw holds a 13-8-1-1 record and is in sixth place.

About The Flint Firebirds:
The Flint Firebirds are a proud member of the prestigious 20-team Ontario Hockey League. The OHL is one of three leagues that constitute the Canadian Hockey League (CHL), which is known as the world’s premiere player development league for the NHL. On NHL opening day rosters in October, 70% of the players were CHL alums. Since the Firebirds’ inception three seasons ago, the team has produced 17 NHL signed or drafted players. The Firebirds average nearly 3,000 fans per game at the Dort Federal Credit Union Event Center, reaching over 100,000 fans each OHL season.