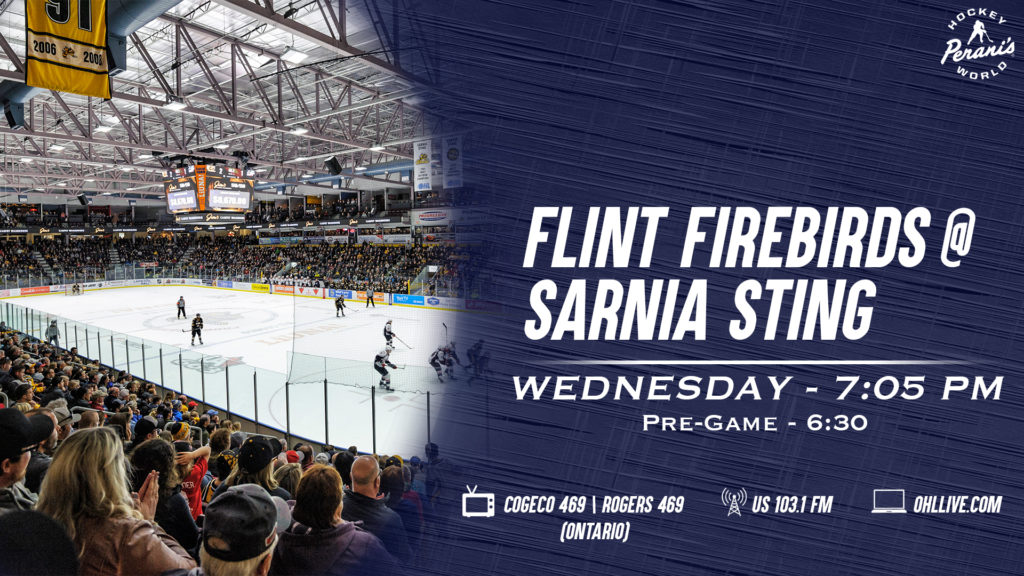 Sarnia, Ont. – After clinching a berth in the 2020 OHL playoffs, the Firebirds are back on the ice Wednesday evening for a West-Division battle against the Sarnia Sting.  Puck drop is set for 7:05 p.m. (ET) at the Progressive Auto Sales Arena (cap. 5,300) in Sarnia, Ont.

Wednesday marks the eighth and final regular-season meeting between these clubs this campaign, and the fourth of four games in Sarnia. The Firebirds have won four of seven contests against the Sting this season, and one of three on the road. All-time, Flint holds a record of 20-18-1-0 in games against the Sting. In away games, the ‘Birds are 7-12-0-0 in the series. Last season, the ‘Birds finished with an overall record of 3-4-1-0 versus the Bee’s, but dropped all four decisions in Sarnia.

The last time these teams met was Monday, February 17 for the afternoon President’s Day (USA) / Family Day (Canada) game. The Birds skated to a decisive 12 – 7 victory at the Progressive Auto Sales Arena in front of more than 4,500 fans. For Flint, the 12 goals surpassed the record of 11 scored in Saginaw in Jan. 2017, the victory was the Firebirds’ 13th-straight and their ninth-straight on the road, Brennan Othmann surpassed both the points (30) and goals (14) records for a first-year Firebirds’ player, Tyler Tucker recorded seven points in one game as a defenseman, passing the previous record of four in 2019 and also recorded a plus-8 rating, passing the previous record of plus-7 in 2019.  Anthony Popovich also tallied his franchise-high 24th win in one season between-the-pipes. The winning streak was halted at 15 games with a 4 – 1 defeat to the Kitchener Rangers in Flint on Saturday.

On special teams this season, the Firebirds hold the third-best overall penalty kill (PK) in the league at 82.7%. Sarnia’s penalty-killers rank 15th at an 77.1% efficiency. With the man-advantage the Sting ranks ninth, scoring at a 21.8% rate. The ‘Birds score at a rate of 20.4% on the power play, which ranks 14th.

Flint Firebirds (37-18-1-1, 2nd West Division):
Ty Dellandrea (Dallas Stars) remains in the top spot on the stat sheet for Flint with 32 goals and 38 helpers in 47 games. He’s also won the fourth-most faceoffs in the league at 647. Belarusian forward Evgeniy Oksentyuk sits second on the club with 30 goals and 39 assists for 69 points in 52 contests. Earlier this season, Oksentyuk carried Flint’s longest-ever point-streak at 17 games (13G, 16A). Dellandrea and Oksentyuk are tied for the eighth-most game-winning goals in the OHL this season, each with six.

Riley McCourt is the top-scoring defenseman in franchise history. For this season, he’s third in total offense with 18 goals and a team-high 41 assists for 59 total points in 57 games. He’s tied for fourth among OHL blue-liners in points, assists and goals, and he’s tied for sixth with a 1.04 points-per-game average. Tyler Tucker (St. Louis Blues) has 16 tallies and 37 helpers in 53 games. He ranks fourth among OHL rearguards with a 1.08 points-per-game average, seventh in points, and is tied for seventh in both goals and assists. Only eight OHL defensemen average more than a point-per-game, and Flint has two of them.

Brennan Othmann continues to lead Flint’s freshman class with 31 total points (15G, 16A) through 49 games. Othmann recently passed Dellandrea for the most-ever goals (13) by a rookie for Flint, and he ranks sixth in goals among first-year players and is tied for eighth in total points in the OHL.

In net, Anthony Popovich has played in 41 games this season. He’s earned 26 victories, which are the most by any Flint netminder in a single season and tied for fourth-most among OHL netminders this season. Popovich’s goals-against average (GAA) is 3.60 and his save-percentage (SAV%) sits at .897. Luke Cavallin now has 11 wins in 20 appearances and carries a 3.68 GAA and a .895 SAV%. Cavallin is Flint’s all-time leader in minutes-played and saves by a Firebirds’ netminder.

Sarnia Sting (20-31-5-1, 5th West Division):
Sean Josling leads the Sting on the stat sheet with 73 points (31G,42A) through 55 games-played. Jacob Perreault’s 14 power-play goals are tied for fourth-most in the league and his 65 total points (35G, 30A) are second on the Sting’s roster. Ryan McGrergor (Toronto Maple Leafs) sits third with 23 goals and 39 helpers in 47 contests.

The Sarnia rearguards are led by Eric Hjorth (Columbus Blue Jackets) who has 12 goals and 16 assists through 56 games. The rookies are led by Ty Voit who has 27 points (8G, 19A) in 46 games. Among first-year players in the OHL, Voit is tied for the eighth most assists.

Second-year netminder Ethan Langevin has played in 34 games for the Sting this season, earning victories in nine of them. He holds a 4.75 goals-against average (GAA) along with a .873 SAV%. Benjamin Gaudreau has eight victories in 23 appearances, along with a 4.50 GAA and a SAV% of .885.

Broadcast Coverage:
Wednesday evening’s contest against the Sarnia Sting can be heard live on the radio throughout Flint & Mid-Michigan on US 103.1 FM, online at www.us103.com or by downloading the US 103 app here. Firebirds’ broadcaster Dominic Hennig will call the play-by-play action on the Firebirds Hockey Radio Network (FHN). Pregame coverage will begin 30 minutes prior to puck drop at 6:30 p.m.