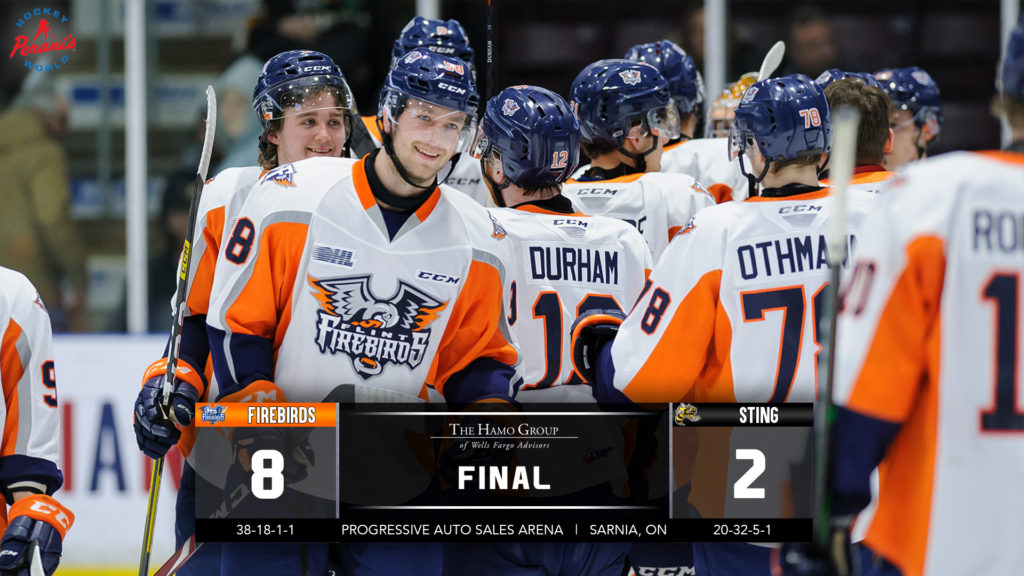 With the win, Flint has now won 16 of their last 17 games, and the team now moves into first place in the West Division and second place in the ten-team Western Conference.

The Firebirds started off hot, scoring four unanswered goals in the first period. Evgeniy Oksentyuk logged the game’s first goal 7:32 into the first period. Cody Morgan carried into the right-wing circle and dished to Oksentyuk along the right wall. The Belarusian forward lifted a wrist-shot from a wide angle that snuck behind netminder Benjamin Gaudreau for his 31st of the campaign, assisted by Morgan and Dennis Busby (Arizona Coyotes).

Next, Jake Durham netted his 20th of the season and moved into second place behind Ty Dellandrea (Dallas Stars) on the goals-scored list by any Firebirds’ player. Cody Morgan fired a long-range shot from high between the circles and Gaudreau made the pad save. Owen Lalonde snagged the rebound and sent it back out to Morgan. The second time, Morgan faked a shot and sent a slap-pass to Durham on the inner edge of the left-wing circle. Durham’s one-timer went behind the sprawling netminder at 10:39.

Emmet Pierce initiated the third goal with a cross-ice pass from the left point to Tyler Deline inside the right circle. Deline quickly backhanded the puck across the slot to Braeden Kressler for the back-door one-timer. The goal was Kressler’s seventh of the season, logged at 11:07. Benjamin Gaudreau was replaced by Ethan Langevin between the pipes following Kressler’s goal.

In the final 30 seconds of the opening frame, Jack Wismer emerged on a one-versus-two rush. He used his body to protect the puck from both defenders, and made a forehand to backhand move in the crease before slipping the puck between Langevin’s right skate and the post for his 25th of the campaign at 19:35. Oksentyuk picked up the solo assist.

First-period shots were 12 – 11 in Flint’s favor. The Birds were unable to score with one power-play chance, and the Bee’s came up empty with two chances on the man-advantage.

The Firebirds scored three more unanswered in the middle frame, beginning with their third power-play opportunity near the midway point of the game. Jake Durham carried up the right side and made a pass between the circles to Vladislav Kolyachonok (Florida Panthers). Kolyachonok took a shot that deflected off a defenseman’s stick and went right to Riley Piercey on the left side of the crease for the simple redirection. It was Piercey’s 17th of the season, logged at 10:21.

Flint’s sixth goal came off the stick of Wismer again. Oksentyuk made a cross-ice pass in the neutral zone to Cody Morgan in the left circle. Morgan tried a wide-angle shot that was saved by Langevin, but the rebound trickled behind him into the goal crease and Wismer was there to tap it home for his second of the night and 26th of the season at 16:08.

Connor Roberts scored Flint’s seventh marker shorthanded. He carried across the neutral zone and across the blue line up the right side of the ice sheet. From just above the right-wing circle faceoff dot, he ripped a wrister that beat Langevin top-shelf, glove-side for his 18th of the season at 18:48, unassisted.

Flint led Sarnia in second-period shots 14 – 9. The Birds’ penalty-killers shut down the Sting on two more power-play opportunities, while scoring once short-handed and going one-for-two with the man advantage in the middle frame.

Sarnia found their way onto the scoreboard on the power play at 7:36 of period three. Brayden Guy gained the zone on the left side and slipped the puck past the lone defender back. Theo Hill gathered the puck and lifted a wrister near-side from low in the left-wing circle. It was Hill’s tenth of the season, assisted by Guy and Ashton Reesor.

Two minutes later, Sean Josling scored his 32nd of the campaign, once again with the man-advantage. Eric Hjorth (Columbus Blue Jackets) sent a point-to-point pass to Josling in the left circle for the one-timer that connected at 9:31. Reesor was again credited with the second assist.

The Firebirds were given a five-minute power-play at 15:14, as a member of the Sting was given a match penalty for slashing from his spot on the bench. Sarnia managed two shorthanded breakaways. Popovich made the first save, but the Bee’s were awarded a penalty shot for a takedown on the second one. Sean Josling skated in on Popovich straight-on but was stonewalled by Flint’s winningest netminder.

Off the ensuing faceoff, the Firebirds set up in the zone and passed around until Owen Lalonde slapped one from just inside the blue line. Both Quinn Yule and Emmet Pierce got a stick on the puck, redirecting it twice before it snuck into the Sarnia bench. Pierce was credited with his fifth of the season at 19:29, on the power-play.

Final shots were 37 – 34 to Flint’s advantage. The Birds finished two-for-four on the power play and the Bee’s ended up scoring twice on six power-play opportunities.