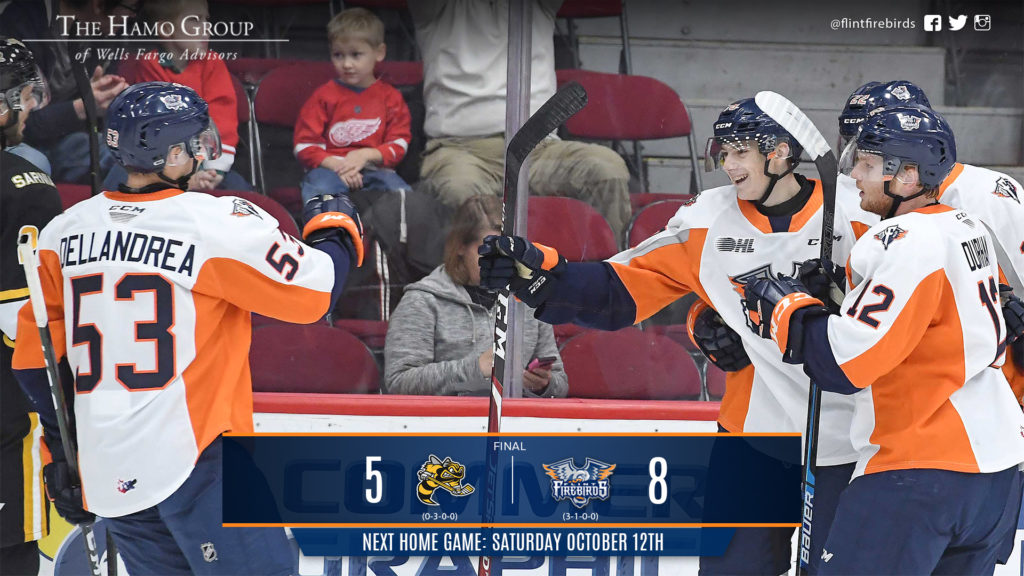 Flint, Mich. – The Firebirds scored the first four goals of the game en-route to an 8 – 5 victory over the visiting Sarnia Sting on Sunday afternoon. With the win, Flint improves to 3-1-0-0 to start the season and 2-0 on home-ice in Flint.

Sophomore forward Evan Vierling had a three-point night (1G, 2A) to clench the game’s ‘First Star’ honors. Evgeniy Oksentyuk extended his point-streak to four games, Ethan Keppen (Vancouver Canucks) scored twice, including a short-handed tally and was named the ‘Third Star’ of the night. Luke Cavallin made 35 saves on 40 shots to earn a win in his first start of the campaign.

Cody Morgan opened the scoring at 2:10 of the opening frame. He received a skilled stretch-pass from Dennis Busby (Arizona Coyotes) in stride as he hit the offensive blue line and created a two-on-one with Ethan Keppen (Vancouver Canucks) on his left. Morgan opted to shoot, beating Ethan Langevin mid-height, far-side, for his second of the season. Michael Bianconi picked up the second assist.

Vladislav Kolyachonok (Florida Panthers) extended the lead with a wicked wrister after a smart fake-shot from high between the circles at the 13:19 mark. Evan Vierling and Connor Roberts assisted on the even-strength marker.

Then, Ty Dellandrea (Dallas Stars) scored Flint’s first power-play goal of the season at 15:15. He showed a burst of speed through the neutral zone and beat a trio of defenders before lifting a backhander from the bottom of the left-wing circle. The puck slid between netminder Langevin’s right arm and his body for Dellandrea’s first goal of the campaign, assisted by Riley McCourt.

First-year forward Brennan Othmann scored his second goal of the season, and first on home-ice in Flint, at 18:01 to put the ‘Birds on top 4 – 0. Dellandrea made the tape-to-tape pass across the slot, allowing Othmann to bury a one-timer just inside the post, near-side. Riley McCourt was credited with the second assist. Flint maintained the 4 – 0 lead through 20 minutes, and held the upper hand in shots 18 – 8.

Langevin was back between the pipes for Sarnia to start the middle stanza.

Sarnia went on a five-minute power play later in the second period and converted at 7:04. Brayden Guy was credited with his second of the season, assisted by Jacob Perrault and Eric Hjorth (Columbus Blue Jackets). Just 28 seconds later, Ethan Keppen (Vancouver Canucks) scored an unassisted short-handed marker for his first of the season. The Sting struck again before the penalty kill expired. Perrault logged his first of the campaign at 8:26. Hjorth and Sean Josling picked up the helpers.

Keppen scored his second of the afternoon at 12:55 of the middle frame, scoring off off the right post from the right circle, this time assisted by Braeden Kressler and Tyler Deline. Sean Josling responded with his first of the season for the Bees less than a minute later. Colton Kammerer and Anthony Tabak assisted on the play. Hjorth scored first goal of the season and third point of the day at 18:13, assisted Josling and Calvin Martin.

Then, Evan Vierling snuck one past Langevin at 5:53 of the third for his first goal of the season. Evgeniy Oksentyuk and Marcus Gretz drew the assists. Sarnia scored a short-handed goal at 6:43 to pull within two. Calvin Martin logged his second of the season and third point of the afternoon, assisted by Josling. Oksentyuk extended Flint’s lead to three again at 7:49 with the ‘Birds’ second power-play tally of the game. Fellow Belarusian Kolyachonok and Evan Vierling were credited with the helpers.

Sarnia fought back within two again on a shorthanded score from Martin at 6:43. Josling earned his fourth point and third helper of the game on the play. Oksentyuk answered 66 seconds later with his second of the season, assisted by Vierling and Kolyachonok.

Flint held on for the 8 – 5 victory. Sarnia managed more shots on goal in the game, by a margin of 40 – 34. On special teams, both teams scored twice on four power-play opportunities, and they both found twine while shorthanded once.

Next up for Flint, the Firebirds will travel to Guelph, Ont. Thursday afternoon for a Friday evening contest against the Storm. Puck drop is set for 7:30 p.m. (ET) at the Sleeman Centre.