Preview: #10 Firebirds look to continue their winning-ways Friday in Sarnia 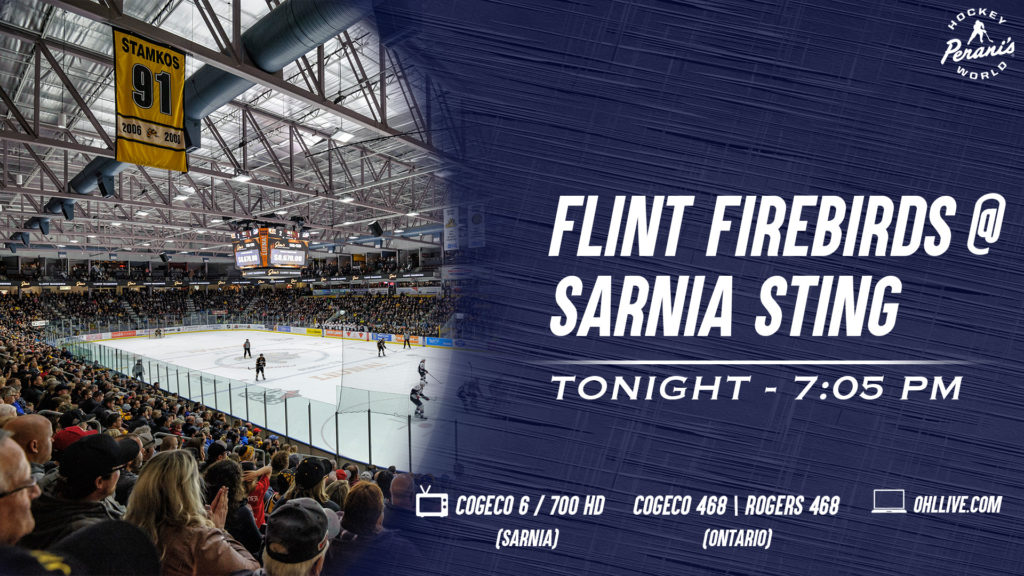 Sarnia, Ont. – The Flint Firebirds will visit the Sting for the first time this season for a Friday night West Division battle. Puck drop is set for 7:05 p.m. (ET) at the Progressive Auto Sales Arena (cap. 5,300) in Sarnia.

Flint enters Friday’s contest on a five-game winning streak, which is a new franchise record. Overall, Flint holds a record of 10-3-0-0 for the season, which is their best start ever. In road games, the firebirds are 4-3-0-0. Flint’s win percentage of .769 is the highest in the Western Conference and the second-highest in the OHL. Also, for the first time in franchise history, the Firebirds are internationally ranked. The ‘Birds are listed at #10 in the CHL Top-10 Rankings, presented by Kia. The weekly rankings of the Canadian Hockey League’s (CHL) Top-10 teams are selected by a panel of National Hockey League scouts.

Friday night marks the second of eight regular-season meetings between these clubs this campaign, and the first of four games in Sarnia. All-time, Flint holds a record of 15-16-2-0 in games against the Sting. In away games, the ‘Birds are 4-11-1-0 in the series. Last season Flint finished with an overall record of 3-4-1-0 versus the Sting. Eight games between these teams have been decided by a single goal.

After starting the season 0-7-0-0, the Sting have won 5 of their last six games.

The last time these teams met was September 29, when Flint skated to an 8 – 5 victory at the Dort Federal Credit Union Event Center. That night, sophomore forward Evan Vierling had a three-point night (1G, 2A) to clinch the game’s ‘First Star’ honors. Ethan Keppen (Vancouver Canucks) scored twice, including a short-handed tally and was named the ‘Third Star’ of the night. Luke Cavallin made 35 saves on 40 shots to earn a win in his first start of the campaign.

On special teams this season, the Firebirds are killing penalties at a rate of 71.4%, which is 17th-best in the OHL. Sarnia’s penalty-killers rank 16th at 71.7% efficiency through. With the man-advantage, the Sting are the OHL’s best team, scoring at a 31.4% clip. Flint converts at a rate of 13.5% on the power play.

Flint Firebirds (10-3-0-0, 1st Western Conference):
Evgeniy Oksentyuk continues to lead the way for Flint with six goals and a team-leading 11 assists for 17 points through 13 contests. Ty Dellandrea has played in 11 games with Flint this season, racking up seven goals and eight helpers for 15 total points. Jake Durham leads the ‘Birds in goals with eight, plus has five assists through 13 contests.

Defenseman Riley McCourt is averaging a point per game with four goals and nine assists in 13 games-played. His 13 total points are tied for ninth-most among rearguards in the league, and his 1.00 points-per-game average paces him in the OHL’s top-10 defensemen. Dennis Busby (Arizona Coyotes) is tied for the third-best plus/minus rating at +13.

Between the pipes, Anthony Popovich has played in nine games this season. His seven victories are tied for third-most in the OHL. He also ranks fifth among goaltenders with five or more starts with a save-percentage (SAV%) of .911, and his goals-against average (GAA) of 3.06 ranks inside the top ten. Luke Cavallin now has wins in three of four games, and he carries a 4.00 GAA with a .893 SAV%.

The Sarnia rearguards are led by Eric Hjorth who has four goals and eight assists through 13 contests. Hjorth’s points and goals rank inside the top ten among defensemen. Ryan Mast is a first-year blue-liner who’s six assists equal the most points by a rookie on the club.

The Sting announced the addition of netminder Jordan Kooy (Vegas Golden Knights) via a trade with the London Knights earlier this week. Kooy has appeared in five contests this season and posted a 4.65 goals-against average (GAA) with a save-percentage (SAV%) of .842. Second-year netminder Ethan Langevin has played in ten games for the Sting this season. He holds a 5.36 GAA along with a .852 SAV%. Last season Langevin posted 18 victories in 43 appearances with Sarnia. Rookie goaltender Benjamin Gaudreau has made four appearances, posting three victories along with a 4.02 GAA and a SAV% of .902.

Broadcast Coverage:
Friday evening’s contest against the Sarnia Sting is 1-of-5 conflicts on the 68-game season that will not have radio coverage.

Next Home Game:
The Flint Firebirds (10-3-0-0 overall | 6-0-0-0 at home) return home this Saturday afternoon for the club’s ‘Grandparent’s Day!’ Puck drop is set for 3 p.m. (ET) at the Dort Federal Credit Union Event Center in Flint.

Grandparent’s day features up to two free kids’ tickets (17 & under) with the purchase of a paid grandparent’s ticket at the Dort Federal Event Center Box Office.