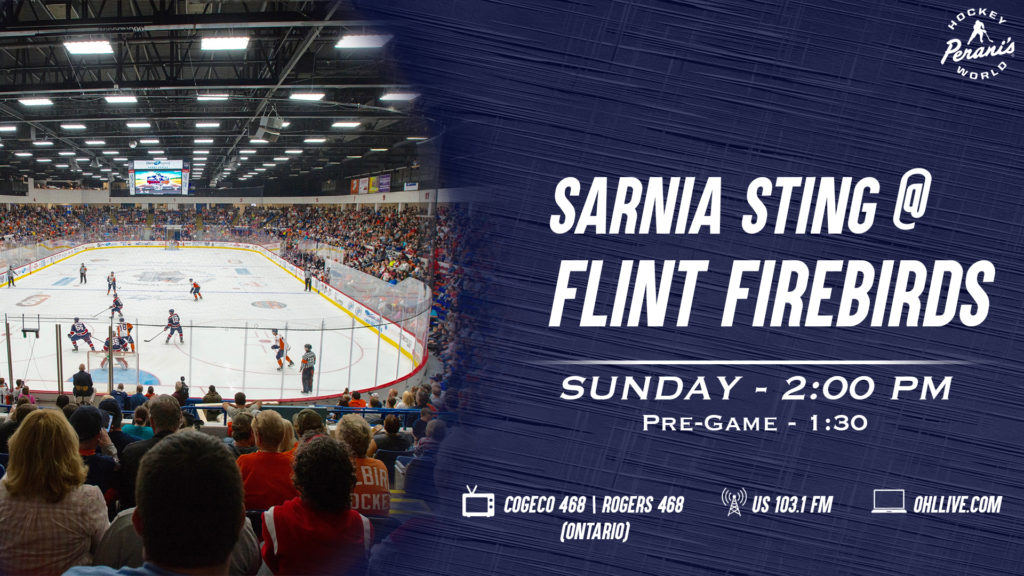 Sarnia, Ont. – The Firebirds will face the Sting in Sarnia in a West Division battle Sunday afternoon. Puck drop is set for 2:00 p.m. at the Dort Federal Credit Union Event Center.

Sunday afternoon also marks the sixth of eight regular-season meetings between these clubs this campaign, and the third of four games in Flint. All-time, Flint holds a record of 15-19-2-0 in games against the Sting. In home games, the ‘Birds are 11-6-1-0 in the series. Last season Flint finished with an overall record of 3-4-1-0 versus the Sting, and were 3-0-1-0 on home ice.

Flint enters Sunday’s contest in fifth place in the Western Conference with a 15-10-0-0 record. SArnia is currently in eighth place with a 12-13-0-0 record. Last night, the Firebirds dropped a 4-1 decision to the London Knights in Flint with Connor Roberts scoring the lone goal. Sarnia posted an 8-3 victory on the road in Sault Ste. Marie. Jacob Perreault recorded a four-point game (2G, 2A) and Jamieson Reese acquired three points (1G, 2A), while Ethan Langevin made 42 saves on 45 shots in the contest.

After the Firebirds won the first game of the season 8-5 in Flint, Sarnia has won the next three. The last time these two team’s met in Flint, it was for the Firebirds’ annual ‘School Day Game.’ Flint outshot the Sting 51-35 but were unable to overcome the visitors who earned a 5-1 victory. Cody Morgan scored Flint’s lone goal. Kelton Hatcher and Jacob Perreault recorded two goals each for Sarnia and Jordan Kooy made 50 saves in the triumph. Anthony Popovich made 30 saves for Flint on 35 Sarnia shots.

Promotions:
It’s Santa’s ‘Family “FUN”day.’ Come enjoy the holiday spirit and get a free picture taken with Santa Claus, his elves and real-life reindeer from 1-3 p.m. There will also be a DIY ornament designing station, while supplies last. Every Sunday Firebirds’ home game is a Family “FUN”day featuring up to 2 free kids tickets with the purchase of an adult ticket, as well as a post-game ‘skate with Firebirds players,’ and an autograph signing session with Firebirds players following the game.

Give the gift of Firebirds Hockey this year! At all Firebirds home games this week, the club is offering 2 holiday-special packages featuring 2 Gold Level flex vouchers and a $20 gift certificate to The Birds Nest for $40 or 2 Silver Level Tickets vs. the Saginaw Spirit on both Jan. 10 and Mar. 18, including an additional 2 Silver Level flex vouchers for $60. Fans can stop in Friday for the Firebirds’ Black Friday sale featuring 25% off in ‘The Birds Nest” merchandise store! (excluding jerseys and game used items.)

Broadcast Coverage:
Sunday afternoon’s contest against the Sarnia Sting can be heard live on the radio throughout Flint & Mid-Michigan on US 103.1 FM, online at www.us103.com or by downloading the US 103 app here. Firebirds’ broadcaster Dominic Hennig will call the play-by-play action on the Firebirds Hockey Network (FHN). Pregame coverage will begin 30 minutes prior to puck drop at 1:30 p.m. New this season, fans can watch the FHN TV Pregame Show live on Facebook and Twitter, also beginning at 10:30 a.m.