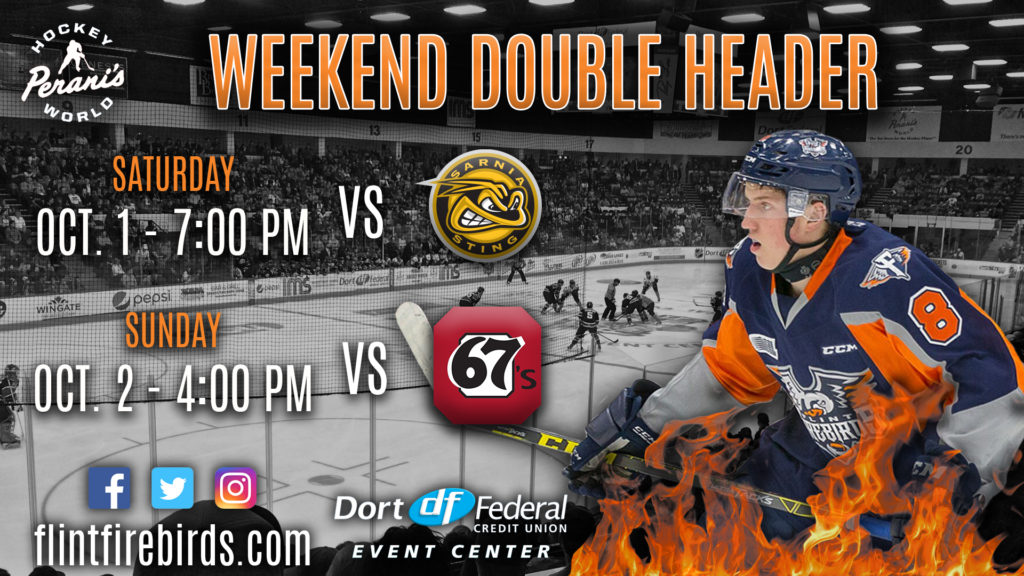 The Flint Firebirds look to stay perfect on home ice this weekend as the club hosts the Sarnia Sting at 7 p.m. (ET) on Saturday and the Ottawa 67’s at 4 p.m. on Sunday at the newly renovated Dort Federal Event Center in Flint, Mich.

After posting 4-0 and 2-0 victories last week, it’s kids weekend in Flint! Sponsored by Dort Federal Credit Union and Pepsi, all children 12 and under receive a complimentary ticket with a purchased adult ticket. Single game tickets for the Flint Firebirds 2016-17 season are $12 for Bronze, $15 for Silver, $19 for Gold and $25 for VIP seating. Prices are unchanged from last season and all seats are reserved / assigned seating. Fans can purchase tickets online here at ticketmaster.com or for more information, contact Matt Dewire at tickets@flintfirebirds.com.

The Firebirds and the Sarnia Sting held an even 4-4 record during the 2015-16 season and were both 2-2 at the Dort Federal Event Center. Firebirds forwards’ Nick Caamano, Ty Dellandrea and Ryan Moore are each riding three-game pointstreak’s and look to continue winning ways this weekend.

After Saturday night’s contest against Sarnia, Flint will host the Ottawa 67’s for a 4 p.m. tilt at the Dort Federal Event Center. Sunday is Dort Federal Credit Union Family Day where the first 2,000 fans will receive complimentary thunderstix, in addition to balloon-twisters, face painters and bounce house’s for the family. The Firebirds split the two-game series last season with Flint winning 7-4 on home-ice Oct. 16 before falling to the 67’s 4-1 in Ottawa Jan 17.

Detroit, Mich. native and Flint Firebirds’ defenseman Jalen Smereck played in his first NHL preseason game with the Arizona Coyotes Monday night. Smereck earned a +1 rating, made two recorded hits and totaled 13:44 of playing time in the Coyotes’ 5-3 home victory over the Los Angeles Kings. Smereck is expected to return to Flint to play for the Firebirds this Saturday at the Dort Federal Event Center.

Forward Luke Kirwan is also expected to suit up for the Firebirds this weekend after playing with the Detroit Red Wing’s in the NHL Prospect Tournament in Traverse City, Mich.