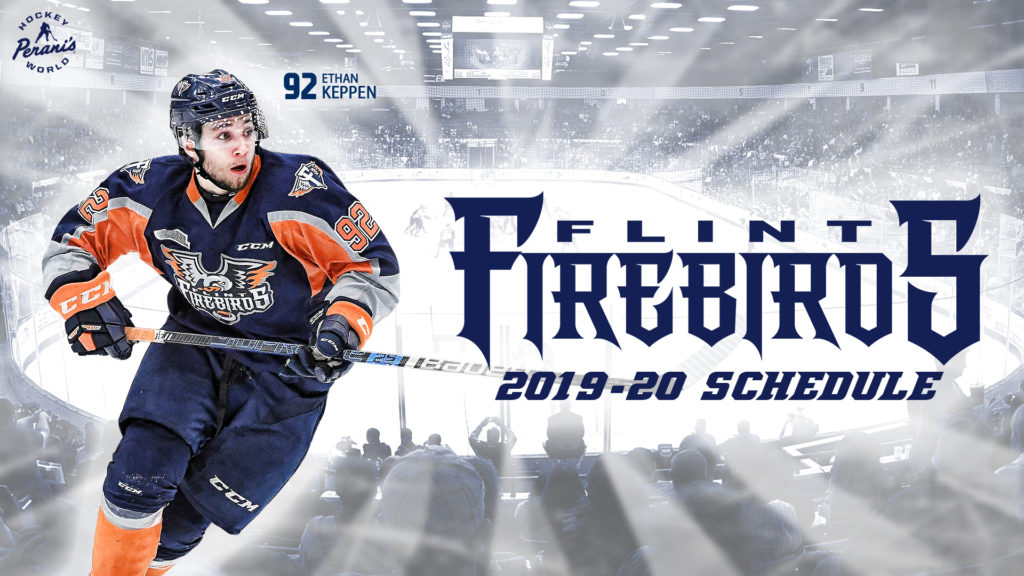 Flint, Mich. – The Flint Firebirds Hockey Club announced the composite schedule for the 2019-20 season, presented by Perani’s Hockey World. The schedule features a record 31 of the Firebirds’ 34 regular season home games taking place on either weekends or holiday dates at the Dort Federal Credit Union Event Center in Flint.

The Firebirds first game on home-ice will be Saturday, Sep. 28 at 7 p.m. (ET) when Flint hosts the Niagara IceDogs for the Firebirds’ fifth-annual Opening Night celebration, which will feature a tailgate party, music, bounce houses for the children and many more family fun activities.

For the fifth consecutive year, Flint will continue the tradition of playing on home-ice the night before Thanksgiving as the Firebirds will host in-state rival Saginaw Spirit on Wednesday, Nov. 27 at 7 p.m. The Firebirds 3rd-annual “School Day Game” will also be a highlight of the schedule this year when the club takes the ice against the Sarnia Sting on Wednesday, Nov. 13th at 11 a.m. Any academic administers or educators interested in bringing their students to the Firebirds “School Day Game” can contact the Firebirds’ Director of Marketing Dominic Gutierrez by calling (810) 701-8536 or emailing domg@flintfirebirds.com.  A full promotional schedule will be released throughout the summer. 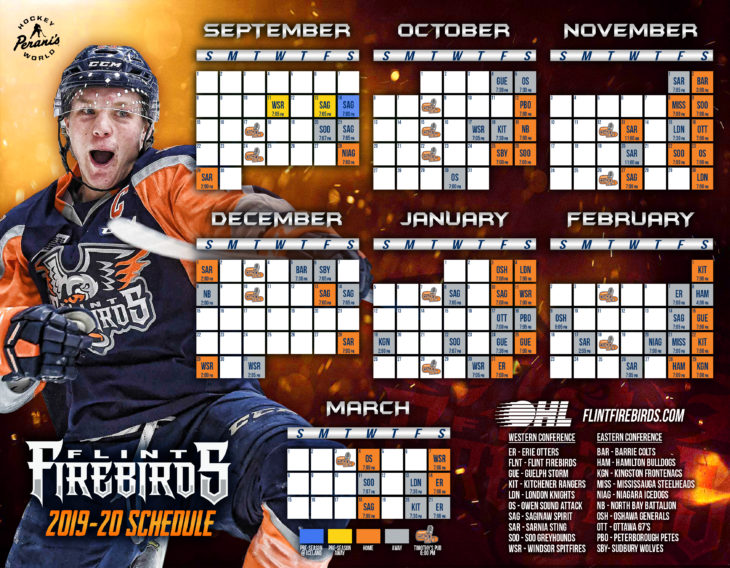 Fans will have the opportunity to see every member of the 20-team league as each club will visit Flint for a minimum of one time throughout the regular season. Likewise, the Firebirds will play in every OHL city at least once throughout the 2019-20 campaign.

The Firebirds will host one Saturday night pre-season game at the Firebirds’ official practice facility, Iceland Arenas on Elms Road in Clayton Township on Saturday, Sep. 14 against Saginaw at 7 p.m. (ET). Tickets are complimentary to Firebirds’ season ticket holders and sponsors. Fans can purchase general admission tickets for $10 dollars.

Fans can also book group outings now for the upcoming season before individual game tickets go on sale to the general public! Group ticket packages are available to fit your needs. Whether you are entertaining corporate clients, celebrating a special occasion, having a fun night out with family and friends or rewarding employees, we have a fun, easy and affordable plan for you! For more information, contact John Notter by calling (810) 744-0580 ext. 216 or by emailing john@flintfirebirds.com.