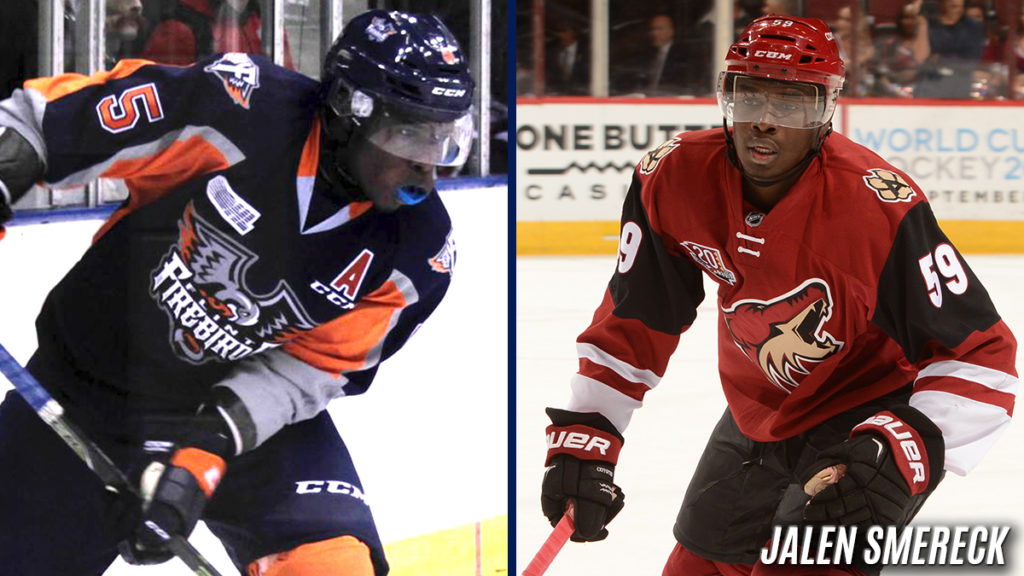 Flint, Mich. – Jalen Smereck has become the first player from the Flint Firebirds organization to sign a NHL contract after the Arizona Coyotes announced today that they have agreed to terms with the defensemen on a three-year entry-level deal.

Smereck played in a NHL preseason game with the Coyotes on Monday, Sept. 26th and earned a plus-one rating, two penalty minutes, two hits and 13:44 of playing time against the Los Angeles Kings. A native of Detroit, Mich., he has four assists in his first two games back with the Firebirds after competing in the Coyotes’ main camp for the past three weeks in Glendale, Ariz.

“This is a surreal moment for my family and I,” said Smereck. “This is an opportunity that I don’t take lightly and am very thankful to the entire Arizona Coyotes organization. There is still a lot of work to be done but I can guarantee that I will work my hardest to get better everyday.”

Smereck, 19, and a six-foot, 195-pound defenseman had an impressive campaign with the Oshawa Generals last season, recording 25 points (5G, 20A) in 63 games. He also earned a point-per-game in the 2016 OHL Playoffs, totaling five points in five games.

“This is an awesome day for Jalen and his family,” said Flint Firebirds General Manager George Burnett. “This is another great example of determination and perseverance by a young man who was a late draft selection into our league and was not picked in the NHL Entry Draft.”

Prior to skating with the Generals, Smereck played his youth hockey in Detroit with both the Little Caesars and Oakland Jr. Grizzlies AAA Hockey Club’s.

“This is a tremendous accomplishment for Jalen and we are so pleased that he is our first Flint Firebird to sign an NHL contract,” said Flint Firebirds Owner Rolf Nilsen. “When I purchased the Plymouth Whalers from Peter Karmanos Jr. and relocated the team to Flint this is what I had in mind. Developing and showcasing elite level players in a great hockey town that knows and appreciates world class talent.”