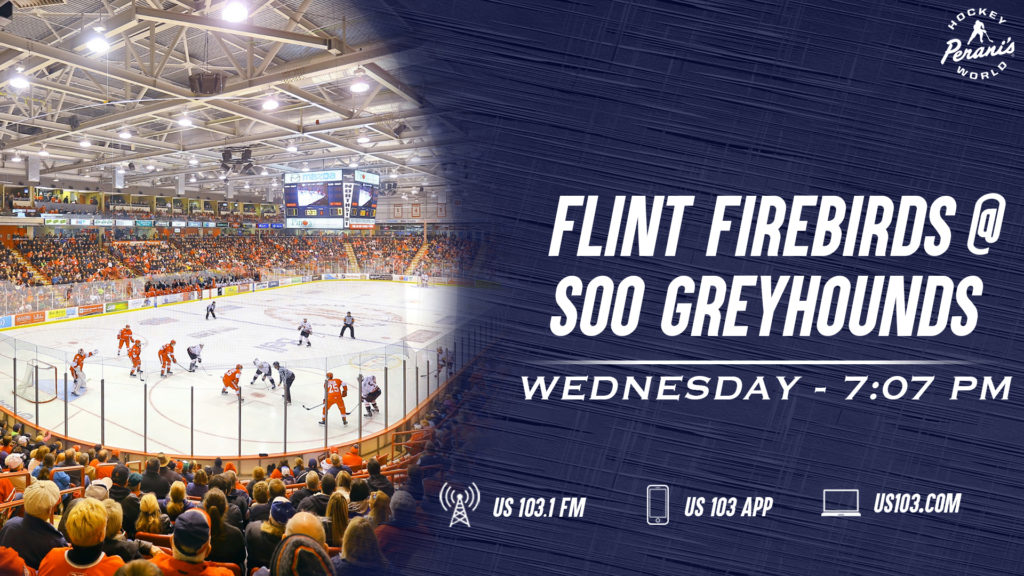 Wednesday marks the sixth and final regular-season meeting between these clubs this campaign, and the third of three in Sault Ste. Marie. Flint holds a 4-1-0-0 record against the Greyhounds this season and are 1-1-0-0 in the Soo. Flint’s record in away games this season stands at 20-9-1-0 compared to Sault Ste Marie’s home-ice record of 13-15-3-0. In their last ten games the Firebirds have gone 7-3-0-0 and the Soo is 4-4-1-1 in that span.

The last time these teams met was January 22 in Sault Ste. Marie, when the Birds earned a 7 – 4 victory over the Hounds. Joe Carroll potted a hat-trick for the Greyhounds, but five Firebirds had multiple points in the contest. Ty Dellandrea (Dallas Stars) and Riley Piercey each had two goals and two assists, Jake Durham and Tyler Tucker (St. Louis Blues) each scored once and added a helper for a two-point night, and Owen Lalonde had two assists. Jack Phibbs scored on a penalty shot and Anthony Popovich stood tall between the pipes, making 28 saves on 32 Soo shots.

Defenseman Riley McCourt is Flint’s all-time scoring leader among rearguards. For this season, McCourt is third in total offense with 18 goals and 44 assists for 62 total points in 62 games. His total points are fifth-most among OHL rearguards, his 18 tallies are tied for fifth, and his 44 helpers are fourth. McCourt also has the seventh-highest points-per-game average among blue-liners at exactly 1.00 point-per-game. Tyler Tucker (St. Louis Blues) is second among the blue-liners and fourth in total offense with 55 total points (17G, 38A) through 54 contests. He ranks eighth in the league in total points by a defenseman, he’s tied for seventh in goals-scored and he’s tied for ninth with 38 helpers. Tucker is just ahead of McCourt with a 1.02 points-per-game average, ranking sixth.

Brennan Othmann leads the freshman class for the ‘Birds with 33 points (17G, 16A) through 54 games. His point-total is tied for tenth among rookies in the league and his 17 goals are sixth-most.

In net, Anthony Popovich has played in 46 games this season. He’s earned 29 victories, which are fifth-most in OHL. Popovich’s goals-against average (GAA) is 3.64 and he has the ninth-best save-percentage (SAV%) in the league at .897. Luke Cavallin has 11 wins in 20 appearances and carries a 3.68 GAA along with a .895 SAV%.

Billy Constantinou leads the blue-line corps with 52 points (9G, 43A) in 59 games-played. Among defenders, Constantinou ranks tenth in points-total and fifth in assists.

First-year forward Tanner Dickinson leads the Hounds’ freshman class with 40 total points, which are fifth-most among the league’s rookies. His 31 assists have him tied for the most in the league in the same category. Dickinson is also on a three-game point-streak, with two goals and two assists in that span.

NHL: The Greyhounds have just one player with NHL ties, defenseman Jacob LeGuerrier (Montreal Canadiens). However, they lead the OHL with seven players listed on the NHL Central Scouting’s Midterm Rankings for the upcoming 2020 NHL Draft. Those who made the list are, Ryan O’Rourke, Jaromir Pytlik, Tanner Dickinson, Rory Kerins, Robert Calisti, Tye Karytye and netminder Nick Malik.

Broadcast Coverage:
Wednesday evening’s contest can be heard live on the radio throughout Flint & Mid-Michigan on US 103.1 FM, online at www.us103.com or by downloading the US 103 app here. Firebirds’ broadcaster Dominic Hennig will call the play-by-play action and Thomas Parisi will provide color commentary on the Firebirds Hockey Radio Network. Radio pregame coverage begins 37 minutes prior to puck drop at 6:30 p.m.

The game is one of three games this season that will not have television coverage.