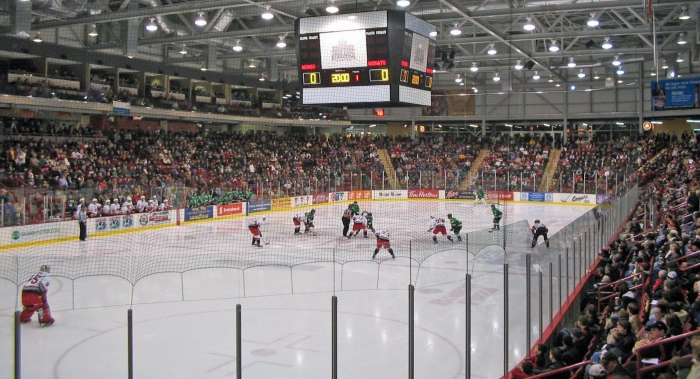 Wednesday marks the fifth of six meetings between the two clubs this season, and the third of three in Sault Ste. Marie. After the Greyhounds won the first two meetings on home-ice, the Firebirds posted a 4-2 triumph in Flint on Nov. 9. On Sunday, Flint stayed on pace with the ‘Hounds until surrendering a last-minute empty-net goal in a 5-3 defeat at the Dort Federal Event Center (Watch Highlights).

Last season, the Firebirds went 2-4-0-0 against the Greyhounds, who spent most of the season at the top of the league’s rankings. All-time, Flint holds a 7-14-1-0 record in the series and a 5-6-0-0 record in ‘the Soo.’ In total, 14 games between these teams have been settled by two goals or fewer.

On special teams, Sault Ste. Marie converts on 24.5% of their power-play chances on home ice. In the 20-team OHL, they rank seventh in the category. The Firebirds have scored 5.6% of the time with the man-advantage on the road. The Greyhounds also rank eighth in home penalty-kills, shutting down the opposition on 84.1% of their chances. The Firebirds rank ninth-best on the road, killing penalties at a 78.6% clip.

Flint Firebirds (3-24-2-0, 5th West Division):
Jake Durham holds the edge in goals-scored and total points for the Firebirds. Through 29 games played, Durham has lit the lamp 18 times and assisted on 12 goals for 30 total points. He has five multi-point games in the past six contests and is on a three game point-streak. Dallas Stars’ first-round draft pick Ty Dellandrea also averages better than a point per game. In 25 contests, he has a team-high 15 assists along with 13 goals for 28 total points. Dellandrea has three consecutive two-point games. Wednesday night is expected to be Dellandrea’s 150th career game in the OHL. He is also on a three game point-streak and has points in 14 of the last 15 games. Eric Uba ranks third on the squad with 21 points (11G, 10A) in 29 games. Evan Vierling, who was selected by the Firebirds second-overall in the 2018 OHL Draft, recorded his first career three-point night Sunday.

Fedor Gordeev (Toronto Maple Leafs) leads the defensive corps with three goals and 13 assists for 16 points in 25 games played on the season. He has points in four of his last five contests. Riley McCourt is on a three game point-streak and has points in six of eight games since returning from injury. First-year defenseman Vladislav Kolyachonok has picked up 11 points in 17 games since joining the Firebirds mid-season.

In net, Emanuel Vella holds a 5.31 goals-against average (GAA) and a .866 save percentage (SAV%) in 20 appearances. Vella has backstopped Flint to one win and two overtime defeats this season. Luke Cavallin is serving game three of a five game suspension and has compiled a 5.61 GAA and a .854 SAV% across 17 appearances. He has picked up two wins and one overtime defeat between the pipes. Evan Morrison has appeared in one pre-season game for Flint, making 9 saves on 13 shots over 32 minutes of on-ice action.

Sault Ste. Marie Greyhounds (17-7-4-1, 1st West Division):
Philadelphia Flyers’ 2017 first-round draft pick Morgan Frost leads the OHL in points with 55 in 29 games this season. His 36 assists also rank atop the OHL. He rides a seven-game point streak (6G, 13A) into Wednesday’s contest. Barrett Hayton (Arizona Coyotes) was the Coyotes’ first-round pick, 5th overall, in this year’s NHL Draft. He has 15 goals and 18 assists in just 20 games played. Brighton, Mich. native Keeghan Howdeshell is in the midst of an eight game point-streak and has scored back-to-back hat tricks, including Sunday in Flint. He now sits tied for third on the ‘Hounds with 32 points (23G, 9A) in 23 games. He ranks fifth in goals-scored and is tied for the most game-winning goals, with six.

Mac Hollowell (Toronto Maple Leafs) tops the defenseman having points in 14 of 16 games and is also tied for third overall on the squad with 32 points (9G, 23A) in just 25 contests.

Winger Rory Kerins leads all first-year players for the ‘Hounds with 11 points (4G, 7A) through 29 games this season.

Between-the-Pipes, goaltender Matthew Villalta (Los Angeles Kings) has backstopped the Greyhounds to 12 wins, including one shutout. He made 25 saves on 28 shots faced in Sunday’s tilt in Flint. With 18 appearances this season, he has the OHL’s ninth-best goals-against-average (GAA) at 3.05 and ninth-best save percentage (SAV%) of .904. Newcomer Ethan Taylor has played in 10 games this season, with a 3.22 GAA and a .884 SAV%. Taylor also has four wins in net.

Broadcast Coverage:
Wednesday evening’s contest can be heard live on the radio throughout Flint & Mid-Michigan on US 103.1 FM, online at www.us103.com or by downloading the US 103 app here. Dominic Hennig will call the play-by-play action with pre-game coverage beginning begin 37 minutes prior to puck drop at 6:30 p.m.

Wednesday’s game is one of only three games on the 68-game schedule this season that will not have live television coverage.

However, all Flint Firebirds home and away games throughout the 2018-19 season can be watched anywhere in the world online on www.ohllive.com or on the OHL Live app. OHL Live is a league video streaming platform that delivers high quality live and on-demand coverage of all regular season and playoff games annually. The cost is $6.99 per game, $69.99 for Flint Firebirds away games only, $179.99 for all 68 home and away Firebirds games and $279.99 for all 1,360 OHL games throughout the 2018-19 season. 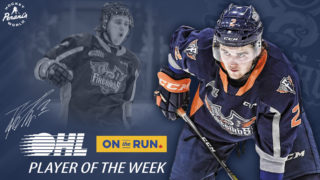