Sting Rally from Behind, Down Firebirds 5-3 Saturday Night 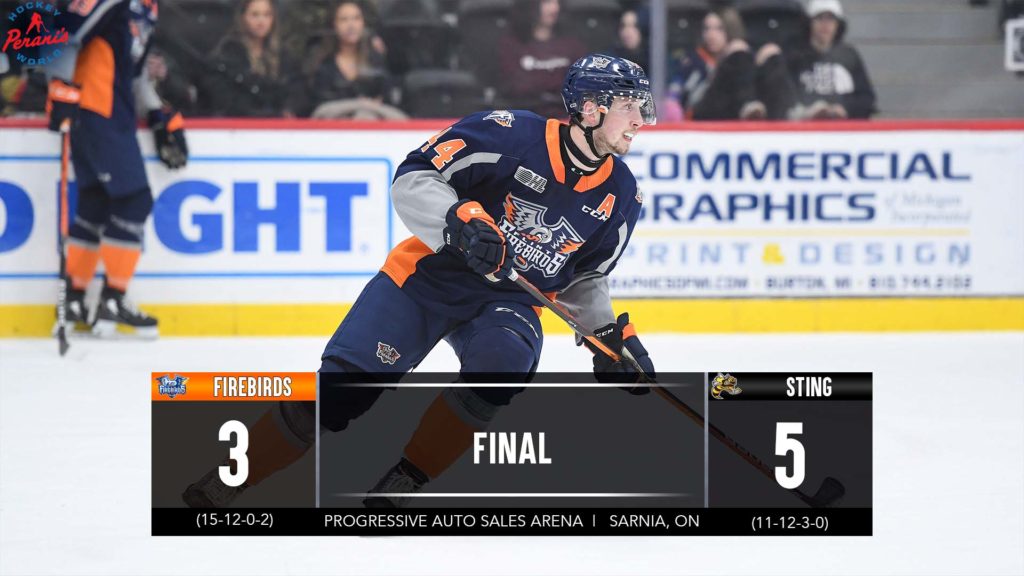 Sarnia, Ont. – Despite taking an early two-goal lead, the Firebirds saw the lead slip away quickly in Sarnia Saturday night. For Flint, Amadeus Lombardi lit the lamp, and now has goals in four of his last five games. Tag Bertuzzi and Coulson Pitre were the other goal scorers for the visitors. Nolan Burke’s two goals and Ty Voit’s (Toronto Maple Leafs) two-point game (1 G, 1 A) propelled the home team past the Firebirds. Alexis Daviault scored his first OHL goal, and Ryan Mast also found twine for the Bees. Luke Cavallin made 30 saves on 35 shots, but on the other end of the ice, Benjamin Gaudreau (San Jose Sharks) earned the victory with 35 saves.

The Birds lit the lamp twice in the opening 20 minutes to jump to a quick lead. First, early in the first period, Ethan Keppan (Vancouver Canucks) carried into the offensive zone and left the puck for Amadeus Lombardi trailing on the play. Lombardi gathered the puck and roofed it, bar-down past Gaudreau for his 13th marker of the campaign at 2:41. Zack Terry picked up the second assist. Later in the frame, Zacharie Giroux won an offensive zone faceoff back to Riley Piercey, who wasted no time finding Tag Bertuzzi. The veteran lifted a high shot that beat Gaudreau blocker-side for his sixth of the season with 6:12 remaining in the first.

First-period shots favored Flint 18 – 11, but the Sting outdrew the Firebirds 18 – 12. No penalties were taken by either club, so special teams remained untested.

The second period was a much different story, with the Sting scoring three-straight goals in 40 seconds to claim their first lead of the night. First, Nolan Dillingham fed rookie rearguard Alexis Daviault high between the circles, and ensuing wrister into traffic ended up behind Cavallin. Daviault’s first OHL goal was logged at 4:39. Within seconds of play resuming, the Firebirds tried to clear a rebound from in front of Cavallin. The puck, however, went directly to Ty Voit in the high slot. Voit slid the puck to Nolan Burke at Cavallin’s left, and Burke’s one-timer lit the lamp for his 15th of the season at 4:51. Finally, Burke lifted a rebound over Cavallin’s pad from point-blank range at 5:19 to complete the Sting’s scoring frenzy. The assists went to Nolan Dann and Chandler Romeo (Ottawa Senators), playing in his first game for Sarnia.

Flint tilted the ice back in their favor after falling behind 3-2, and it paid off at 10:31. A turnover in the Sarnia zone was gathered by Lombardi, and he deked around the only defender between him and Gaudreau. He then slid the puck to his right where December’s OHL Rookie of the Month Coulson Pitre one-timed a shot home near-side for his tenth of the season at 10:31.

Sarnia wasn’t finished, and they reclaimed the lead six minutes later while on the game’s first power play. Nolan DeGurse hit Wolverine Lake, Mich. native Max Namestnikov at the left-wing half boards. The first-year centerman carried into the corner and behind the Flint net before passing to Bloomfield, Mich. native Ryan Mast in the right-wing circle. Mast shot off the far post and in for his fourth of the year at 16:14.

Second-period shots ended 20-8, advantage Sarnia. In the faceoff circles, the Sting had a slight edge of 15-14. The Bees scored on the lone power play of the frame.

The teams played intense back-and-forth hockey without scoring through the first half of the third before Voit extended the lead to two at 11:07. Nolan Dann carried into the offensive zone along the right-wing boards and hit the brakes to shake his defender. He made a sharp cross-ice pass to Voit in the left circle, and the ensuing seeing-eye shot nestled perfectly into the top corner, far-side. Dillingham earned the second helper on the game’s final tally.

The Firebirds’ had plenty of opportunities to cut the deficit late. Cavallin was called to the bench with three minutes remaining in regulation, and coach Ted Dent used his timeout seconds later after a whistle. The Sting cleared the puck over the boards off the first faceoff after the timeout, resulting in a delay of game penalty and giving Flint the 6-on-4 manpower advantage for a full two minutes. Despite generating several quality shots, the Sting held on for the 5-3 triumph on home ice.

Final shots were 38-35 in Flint’s favor. Sarnia won more faceoffs, by a margin of 44-36. Both teams had one power-play opportunity in the contest, but the Firebirds were unable to convert whereas the Sting finished 1-for-1.

Next Home Game: The Firebirds next home game is set for January 21st against the Soo Greyhounds. They were originally set to host the Kitchener Rangers Wednesday, January 12. All home games are tentative as the league continues to maneuver around the new regulations in place by the Ontario government. Follow FlintFirebirds.com for more updates, as they become available. You can purchase tickets for all Firebirds home games at Etix.com HERE.