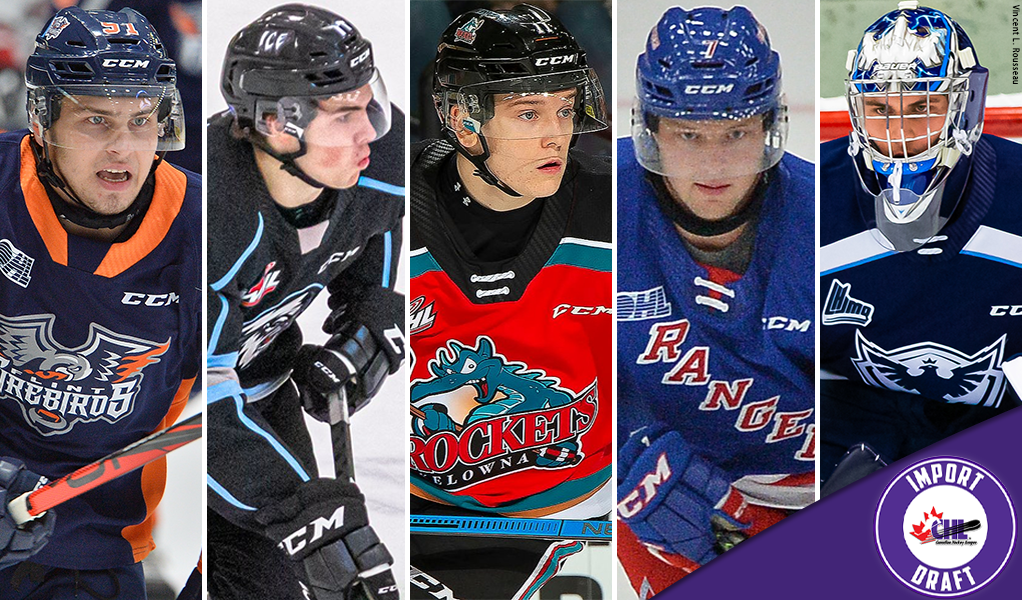 With the puck dropping for the 2020 CHL Import Draft on Tuesday, it’s time to reflect on the most impactful selections from last year’s class:

Hearing his name called at No. 5, Belarusian-born Evgeniy Oksentyuk provided immediate returns for the Flint Firebirds as he finished his inaugural campaign with a team-leading 78 points counting 33 goals and 45 assists through 58 appearances to help the Firebirds to a franchise-high 82 points since uprooting from Plymouth in 2015. The 19-year-old left-wing ranks 109th among North American skaters ahead of the 2020 NHL Draft.

Only days after being chosen in the fourth round of the 2019 NHL Draft by the Chicago Blackhawks, Michal Teply soon brought his talents to North America after being selected fourth overall by the Winnipeg ICE. Upon the club’s arrival to the Manitoba capital, the budding right-wing was one of a handful of stars who dazzled the home crowd to the tune of a 63-point season that included 29 goals and 34 assists in 53 games to finish second in team scoring while also topping all WHL freshmen. The year also saw Teply shine on the international stage as he posted five points in as many games at the 2020 World Juniors in which he was recognized as a top-three player for his native Czech Republic.

Another Czech was off the board at the 13th selection in the 2019 CHL Import Draft as the Kelowna Rockets called on right-wing Pavel Novak who excelled in his first season in the Okanagan scoring above a point-per-game pace with 25 goals and 33 assists through 55 contests to lead his squad in scoring and finish just four shy of the league-wide rookie scoring race. Eligible for the 2020 NHL Draft, the 18-year-old ranks among 85th among North American skaters per NHL Central Scouting.

A seventh-round selection by the Arizona Coyotes in the 2019 NHL Draft, Swedish-born blue-liner Axel Bergkvist quickly joined the Kitchener Rangers as the 95th pick in the international selections. For the blueshirts, the 2000-born defenceman made a seamless adjustment to his new surroundings in producing 52 points counting nine goals and 43 assists through 62 contests to lead all team rearguards in scoring while finishing 11th among his OHL brethren.

Between the pipes, the Sherbrooke Phoenix witnessed a formidable first season from Slovak-born netminder Samuel Hlavaj, the club’s first choice at 27th overall. Across 39 appearances, Hlavaj surrendered just five regulation losses in leading the Phoenix to a franchise-record 106-point campaign that also saw him finish first among QMJHL goaltenders with a 2.25 goals-against average to earn the Jacques Plante Trophy. For his efforts, Hlavaj was named to the QMJHL All-Rookie Team in addition to the QMJHL Second All-Star Team. A participant in the 2020 Kubota CHL/NHL Top Prospects Game, the 19-year-old ranks second among North American netminders ahead of the 2020 NHL Draft.

A mid-season addition to the Kingston Frontenacs, left-wing Martin Chromiak made the most of his abbreviated stint in the Limestone City scoring above a point-per-game pace in tallying 11 goals and 22 assists across 28 appearances to earn a spot on the OHL Second All-Rookie Team. Selected second overall in the 2019 CHL Import Draft, the 17-year-old Slovak native will soon hear his name called again as he ranks 30th among North Americans ahead of the 2020 NHL Draft.

Another talent who came to North America following his play at the 2020 World Juniors, 18-year-old Czech centre Jan Mysak made quick work in his 22 appearances with the Hamilton Bulldogs in finding the back of the net 15 times while adding 10 assists for 25 points. Chosen 20th overall in the 2019 CHL Import Draft, Mysak is now earmarked for NHL Draft selection as he ranks 28th among North American skaters.

Two years removed from his 18th overall selection by the Ottawa 67’s in the 2018 CHL Import Draft, Austrian-born centre Marco Rossi emerged as a top player over his two seasons in the Canadian capital culminating with a CHL-leading 120-point campaign counting 39 goals and 81 assists through 56 appearances in 2019-20 becoming just the third import player to win the CHL Top Scorer award. The 18-year-old is primed for early selection in the 2020 NHL Draft as he ranks sixth among North Americans.

A dominant force at the 2019 CIBC Canada/Russia Series in which he collected five points through a pair of appearances, Minnesota Wild prospect Alexander Khovanov of the Moncton Wildcats displayed similar offensive wizardry throughout the regular season registering 99 points counting 32 goals and 67 assists through 51 contests to finish second in league scoring and only 13 shy of 2020 NHL Draft prodigy Alexis Lafreniere. The 20-year-old centre also impressed with a league-leading plus-58 rating, cementing his spot on the QMJHL First All-Star Team, while on the international stage powered his native Russia to a silver-medal finish at the 2020 World Juniors. Khovanov was originally chosen second overall by the Wildcats in the 2017 CHL Import Draft.

Through two seasons with the Prince Albert Raiders, Belarusian centre Aliaksei Protas has emerged as a key offensive contributor for his squad where following a modest rookie campaign he reached another level in the 2019 postseason contributing 22 points through 23 games to help guide the Raiders to their first Ed Chynoweth Cup championship in 34 years. This led to a third-round selection by the Washington Capitals a month later and he then built on that performance this season to lead the squad with 80 points counting 31 goals and 49 assists through 58 appearances to rank ninth in league-wide scoring and earn a spot on the WHL Eastern Conference First All-Star Team. Protas was originally chosen 26th overall by the Raiders in the 2018 CHL Import Draft.