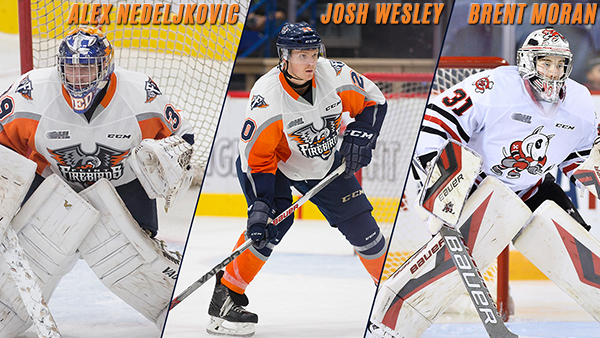 Flint, Mich. – The Flint Firebirds announced today that the club has completed a trade with the Niagara Ice Dogs.

Flint has traded goaltender Alex Nedeljkovic (Carolina ’14), who is expected to miss three weeks while competing with Team USA at the 2016 IIHF World Junior Championship, and defenseman Josh Wesley (Carolina ’14) to the Ice Dogs. In return, the Firebirds received Niagara goaltender Brent Moran (Dallas ’14) in addition to three OHL Priority Selection second round picks and two third round picks.

Moran, a native of Orleans, Ont., was selected by the Dallas Stars in the fourth round of the 2014 NHL Draft after being ranked third among North American goaltenders in the Central Scouting final rankings at the conclusion of the 2013-14 season.

“Last year, we acquired a non-playoff team that lost its top four scorers, including Sonny Milano, a 2014 first round draft pick of the Columbus Blue Jackets,” said Flint Firebirds general manager Terry Christensen. “We had very few picks available to us for the 2015 OHL Priority Selection. Since then, with the addition of this trade, we have put ourselves in a great position for future OHL Priority Drafts for the next three years.”

In the previous ten games, Moran holds an impressive a 7-2-1-0 record, while posting a 2.46 goals against average (GAA) and a .913 save percentage (SV%). Moran was also a member of the Canada U18 team that participated in the 2014 IIHF World Hockey Championship in Finland.

“Throughout the history of the NHL and OHL, the long-term success of all of the franchises at these respective levels has been patience, the development of their players on a daily basis, and drafting top talent based on the clubs needs. Moving forward, we fully expect our team to compete at a high level and achieve our goal of making the 2016 OHL playoffs,” added Christensen.

Flint returns home to the Dort Federal Event Center this Friday for the club’s inaugural “Ugly Sweater Jersey Night” against the Mississauga Steelheads at 7:30 p.m. There will be a live jersey auction immediately following the game with proceeds from the auction, a 50-50 raffle, Chuck-A-Puck, and game program sales benefiting the Old Newsboys of Flint. Also, with Christmas right around the corner, children of all ages will have their chance to meet Santa Claus and get their picture taken throughout the duration of the game.

About the Flint Firebirds

The Flint Firebirds are a proud member of the prestigious Ontario Hockey League (OHL) based in Flint, Michigan, USA. The team is part of the West Division of the Western Conference in the OHL, known as the premiere player development league for the NHL. The Firebirds players, generally ranging in ages between 16 and 20, play their regular season home games at the Dort Federal Event Center in Flint between September and March.