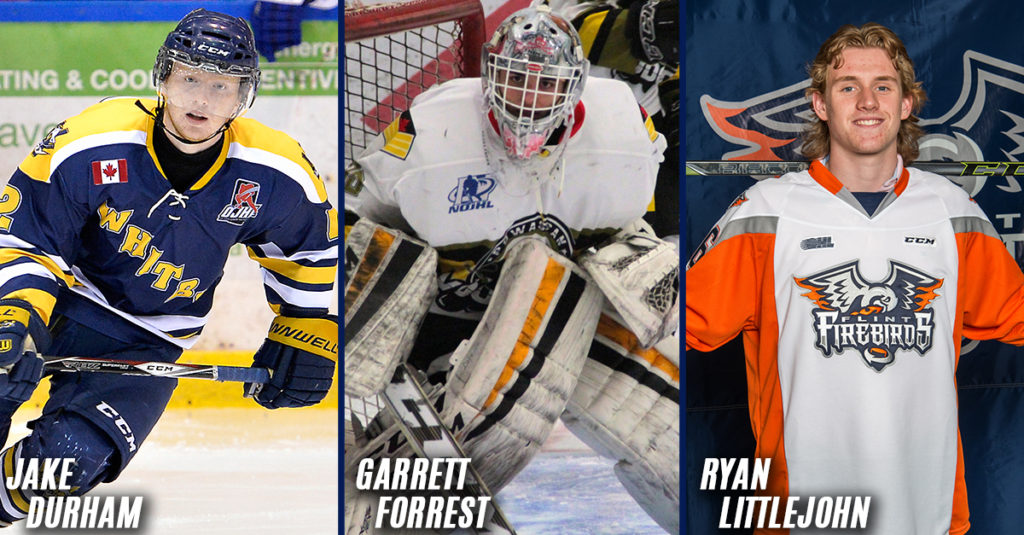 Flint, Mich. – The Flint Firebirds announced today that the club has received a commitment from forward’s Jacob Durham and Ryan Littlejohn in addition to goaltender Garrett Forrest.

“All three had a very good showing at training camp this week,” said Flint Firebirds Head Coach Ryan Oulahen. “They’ve proven that they deserve to play in this league and although the work starts now, we’re happy to have them a part of our organization.”

Littlejohn was selected in the third-round, 48th overall in the 2016 OHL Priority Selection. In 71 games last season with the Mississauga Rebels, Littlejohn tallied 18 goals, 29 assists for a total of 47 points including 132 penalty minutes. The 6-1, 185 pound left-winger is a native of Newmarket, Ont.

A seventh-round selection in the 2015 OHL Priortiy Selection by the Hamilton Bulldogs, Durham comes to the Flint Firebirds after playing Jr. A hockey for the Whitby Fury in the Ontario Junior Hockey League (OJHL). Signed as a free agent, the Port Perry, Ont. native scored nine goals and chipped in 12 assists for 21 points in 54 games played. Prior to playing in Whitby, Durham played AAA hockey with the Central Ontario Wolves. As the captain of the Wolves, Durham averaged a point-per-game, scoring 21 goals and adding 12 assists for 33 points in 33 games.

Forrest is a native of Ashburn, Virginia and played his minor hockey with the Detroit Belle Tire, Little Caesars and Honeybaked AAA Clubs. Last season, Forrest earned First Team All-Star accolades after recording an impressive 2.37 GAA and a .934 save percentage in 38 games played with the Powassan VooDoos in the Northern Ontario Junior Hockey League (NOJHL). Forrest was second among NOJHL goaltenders with 24 wins and led all league netminders in save percentage and in shutouts (5).