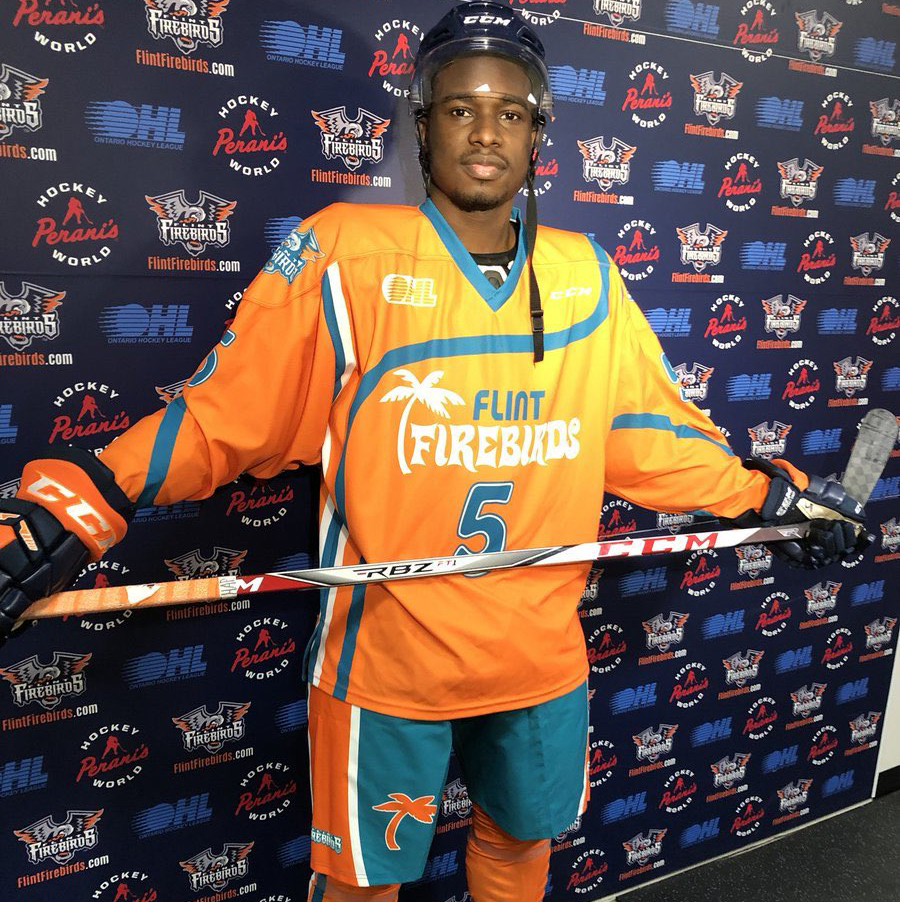 Flint, Mich. – The Flint Firebirds are set for the club’s third-annual “Flint Tropics Night” this Saturday against in-state rival, the Saginaw Spirit. Puck drop is set for 7 p.m. (ET) at the Dort Federal Event Center in Flint.

Saturday’s tilt is the eighth and final game scheduled between the Firebirds and Spirit this season. The Firebirds hold an 11-10-0-2 all-time record against Saginaw. Flint successfully secured the Coors Light I-75 Divide Cup for the first two seasons of its existence after notching identical 5-2-0-1 records in the past two years. Saginaw has captured the cup this year for the first time and hold a 6-1 record against Flint this campaign.

In their most recent contests, Sarnia topped the Spirit 3-0 with an empty net goal last night in Saginaw. For the second consecutive game, Flint was tied to the Eastern Conference’s second-placed Barrie Colts in the third period. It was 5-5 Wednesday night in the final frame before Barrie scored three-unanswered, including an empty-net tally to secure an 8-5 victory over Flint. Saginaw is 2-1-2-0 in their last five games and is 10-9-6-0 on the road this season. The Firebirds are 12-14-1-0 at home this campaign.

Last time Saginaw visited Flint on Feb. 1, at least 16 of the 31 NHL teams had scouts in the building, with an estimated 30+ NHL scouts in attendance to watch the Firebirds and Spirit play.

On Special teams, the Firebirds power-play continues to stay hot with goals in 16 of their last 20 games. The power-play continues to improve, having moved up to 15th in the 20-team OHL clicking at 17.9%. On the penalty-kill, the Firebirds were nearly perfect in their last three games, killing off 10 of 12 chances. They are now 75.4% overall shorthanded, ranking 17th in the league. For the Spirit, their power-play is ranked 18th with a 16% successful rate. Saginaw’s penalty-kill is ranked 16th in the OHL at 77.7%, however, Saginaw was a perfect 2-for-2 last night vs. Sarnia when down a man.

Promotions:
Inspired by the movie “Semi-Pro” starring Will Ferrell, the Firebirds will be wearing special themed jerseys, pants and socks throughout the game that are sure to impress everyone in attendance. Immediately following the game, there will be a live jersey auction, giving fans an opportunity to take home the game-worn Flint Tropics jersey of their choice. Proceeds will be donated to the Firebirds Charitable Foundation which benefits local youth organizations throughout Flint, Genesee County and Mid-Michigan.

Saturday is also “Boots for Kids” Night. Sponsored by HAP, “Boots for Kids” is a donation drive that will take place on the 17th, 23rd and 24th of February. Fans who donate a new pair of boots to the Firebirds’ Merchandise Store or at the special HAP table in the lobby on game night will receive a complimentary silver level ticket courtesy of HAP.

Flint Firebirds (16-33-3-2, 5th West Division)
C.J. Clarke has scored a goal in four consecutive games for the Firebirds. Clarke now has 13 goals on the season and has ran his current point-streak to four games. In the Firebirds’ second-annual “Flint Tropics” game last season vs. Sarnia on Feb. 18, Clarke potted back-to-back goals less than five minutes apart.

Maurizio Colella has been one of the hottest scorers in the OHL. He’s extended his point-streak to six games and is now just two games short of his career-best of eight games. During this streak, he had three goals and six assists. Colella leads the team in scoring with 48 points. Ty Dellandrea has also been on fire offensively and leads the team with 22 goals and is second with 47 points. Dellandrea’s career-high seven-game point-streak (5G, 6A) came to an end against Barrie last Saturday. Connor Roberts is third for the Firebirds in both goals with 15 and points with 29.

Firebirds’ captain Jalen Smereck (Arizona Coyotes) continues to lead all defenseman with 25 points (8G, 17A) in 32 games. The Detroit, Mich. native had his five-game point-streak snapped last Friday in Sudbury . Fedor Gordeev (Toronto Maple Leafs) is second on the blue line in scoring with 21 points. Gordeev leads the team in penalty minutes with 94. Riley McCourt leads all rookies with 18 points and Ethan Keppen leads all rookies in goals with seven.

In net, rookie Luke Cavallin leads the team in goals-against average (GAA) at 3.94 and in save percentage (SAV%) at .873. Overage goaltender Garrett Forrest has played in three of the last four games. Forrest leads the team in wins with 11 and is the Firebirds’ all-time leader in both wins and saves. In 38 games, he has a 4.56 goals-against average (GAA) and a .869 save-percentage (SAV%).

Saginaw Spirit (26-20-8-0, 3rd West Division):
Saginaw has plenty of offensive firepower with three players topping 40-plus points this season. All point-streaks came to an end last night as Saginaw was shutout by Sarnia 3-0. Defenseman Marcus Crawford leads the Spirit with 48 points (11G, 37A) in 54 games this season. Cole Coskey is second with 46 points (24G, 22A) while former Kitchener Rangers and Oshawa Generals forward Mason is third with 45 points.

Blade Jenkins is considered Saginaw’s best prospect for the upcoming NHL Draft in June. After coming over from the United States National Team Development Program (USNTDP) to Saginaw this season, Jenkins has 34 points (16G, 18A) in 54 games during his rookie season in the OHL.

In net, Evan Cormier (New Jersey Devils) has appeared in 48 games this season and leads the team with 21 wins. Cormier is statistically the ninth-best goaltender in the OHL with a 3.17 goals against average (GAA) and a .899 save percentage (SAV%). Cormier played last night vs. Sarnia and made 28 saves on 30 shots. Cameron Lamour has five wins in 14 games with a 4.07 goals against average and a .871 save percentage (SAV%).

Broadcast Coverage:
Saturday evening’s contest against the Saginaw Spirit can be heard live on the radio throughout Flint & Mid-Michigan on US 103.1 FM, online at www.us103.com or by downloading the US 103 app here. Dominic Hennig will call the play-by-play action on the Flint Firebirds Hockey Radio Network. Pregame coverage will begin 30 minutes prior to puck drop at 6:30 p.m.

The game will also be televised live province-wide throughout Ontario on the OHL Action Pak on channel 436 for Rogers TV cable subscribers and channel 477 for Cogeco TV cable subscribers. OHL fans with cable television in Ontario can add the OHL Action Pak to their television plan to catch the Firebirds in action, home or away all season long.  Through Saginaw’s partnership, the game will be re-broadcast on CW WBSF Charter channel 17 / 717 (HD) & Comcast channel 15 / 236 (HD) Sunday at 12 p.m. throughout Mid-Michigan. Along with Saturday’s game, 65 of the Firebirds’ 68 games throughout the 2017-18 season are also scheduled to be televised live across the province of Ontario on the OHL Action Pak.

All Flint Firebirds home and away games throughout the 2017-18 season can be watched anywhere in the world online on www.ohllive.com or on the OHL Live app. OHL Live is a league video streaming platform that delivers high quality live and on-demand coverage of all regular season and playoff games annually. The mid-season pricing is $6.99 per game, $49.99 for Flint Firebirds away games only, $99.99 for all remaining home and away Firebirds games and $149.99 for all OHL games throughout the remainder of the 2017-18 season.