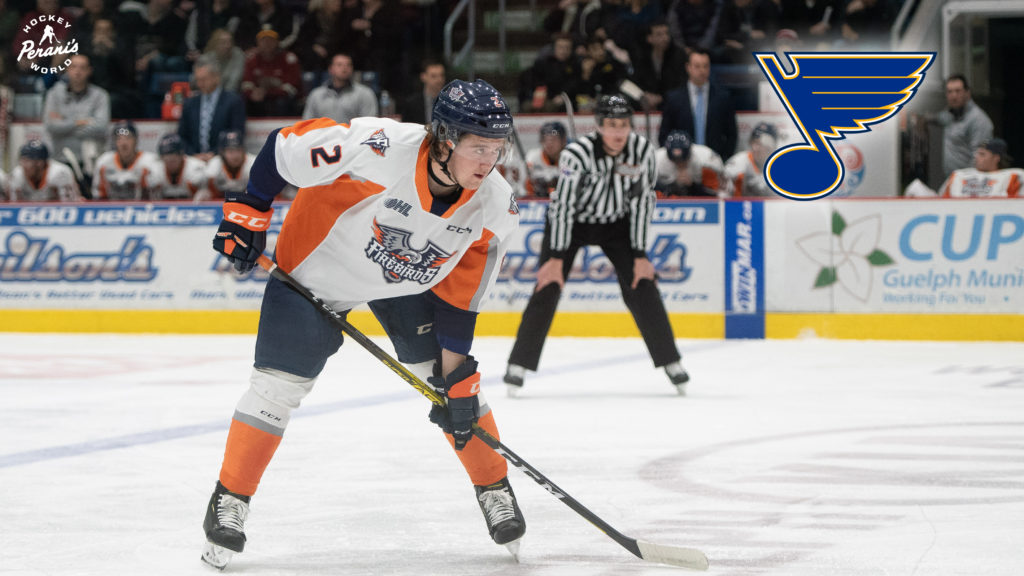 The St. Louis Blues announced that the club has signed Flint Firebirds’ defenseman Tyler Tucker to a three-year entry-level contract. As per club policy, terms of the contract were not disclosed.

Tucker, 20, agreed to terms with St. Louis on his birthday, Monday, March 1st after being selected by the Blues in the seventh-round (200th overall) of the 2018 NHL Draft.

“On behalf of the Flint Firebirds’ organization, we want to congratulate Tyler and his family on signing with the St. Louis Blues,” said Flint Firebirds Vice President of Hockey Operations & General Manager Barclay Branch. “Tyler’s hard work and commitment has paid off and we could not be happier for him.”

Tucker, a 6-foot-2, 205-pound native of Longlac, Ont. has recorded 55 points (17G, 38A) including 83 penalty minutes and a plus-10 rating in 52 games this season. Tucker set a franchise-record for most points by a Firebirds player in a single game (7) and best plus-minus rating in a single game (+8) in Flint’s 12-7 victory over the Sarnia Sting on Feb. 17. In his OHL Draft year, Tucker was initially selected in the first-round (14th overall) by the Barrie Colts in the 2016 OHL Priority Selection before being acquired by the Firebirds on Jan. 7.

The Firebirds return to home-ice this week for games this Wednesday and Saturday at the Dort Federal Credit Union Event Center. Puck drop is set for 7 p.m. both nights in Flint.

About The Flint Firebirds:
The Flint Firebirds are a proud member of the prestigious 20-team Ontario Hockey League. The OHL is one of three leagues that constitute the 60-team Canadian Hockey League (CHL), which is known as the world’s premiere player development league for the NHL. On NHL opening day rosters in October, 70% of NHL players were CHL alums. Since the Firebirds’ inception in Flint, Michigan four seasons ago, the team has produced 18 NHL signed or drafted players. More than 250 scouts representing all 31 NHL clubs attended a Firebirds game in Flint throughout the 2018-19 season. The Firebirds average nearly 3,000 fans per game at the newly renovated Dort Federal Credit Union Event Center, reaching over 100,000 fans each OHL season.