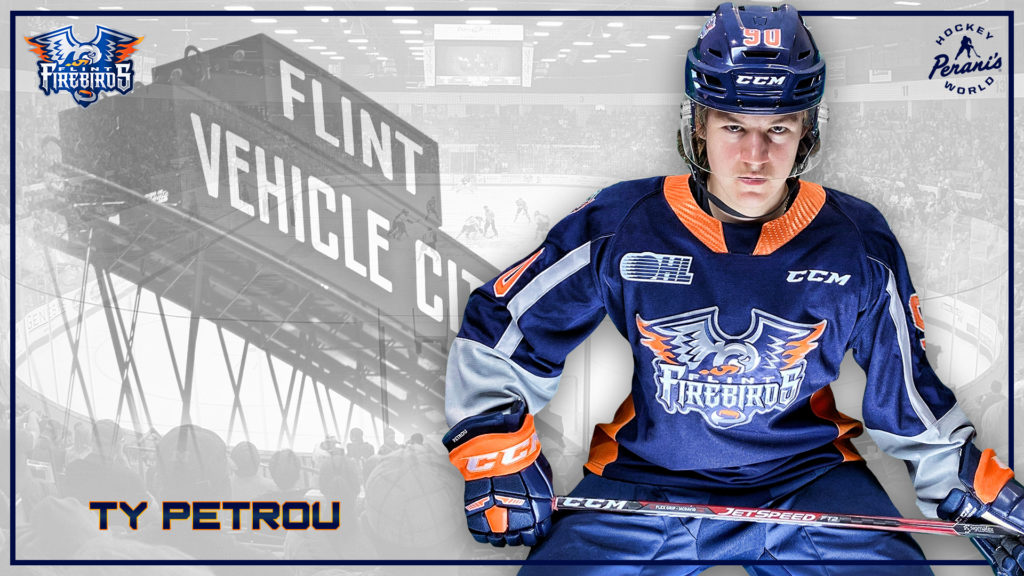 “We are proud to announce Ty and his family have committed to the Flint Firebirds,” said Flint Firebirds Vice President of Hockey Operations and General Manager Barclay Branch. “Ty is a player that embodies character, work ethic and skill and will be a key addition to our group moving forward.”

Petrou was the Firebirds’ third pick in the 2020 OHL Priority Selection, chosen in the fourth-round (72nd overall). A native of Pickering, Ont., he recorded 34 points (14G, 20A) in 35 games this past season with the Ajax/Pickering Raiders in the Ontario Minor Hockey Association-Eastern Triple-A League (OMHA-ETA). Continuously recognized as a leader, Petrou was voted as an assistant captain for the past three consecutive years with the Raiders and has either been a captain or an assistant captain for seven of the eight years he played AAA hockey.

“There is no better feeling than being able to sign an OHL contract, especially with such a first-class organization like Flint,” said Petrou. “Ever since being selected in April, the Firebirds organization has been so amazing and welcoming. I’d like to thank everyone that helped me get to this point, especially my parents for all their support. I cannot wait to get to Flint and meet the team, staff and fans.”

The 5-foot-11, 165-pound skater led Ajax/Pickering in points and played a key role in helping the Raiders capture both the OMHA West Division regular season title and the Vaughan Kings Classic during the 2018-19 campaign. In 2014, Petrou was a member of the Toronto Pro Hockey selects team that won the prestigious Brick Invitational Tournament in Edmonton, Alta.

Petrou will wear number 90 for the Firebirds.