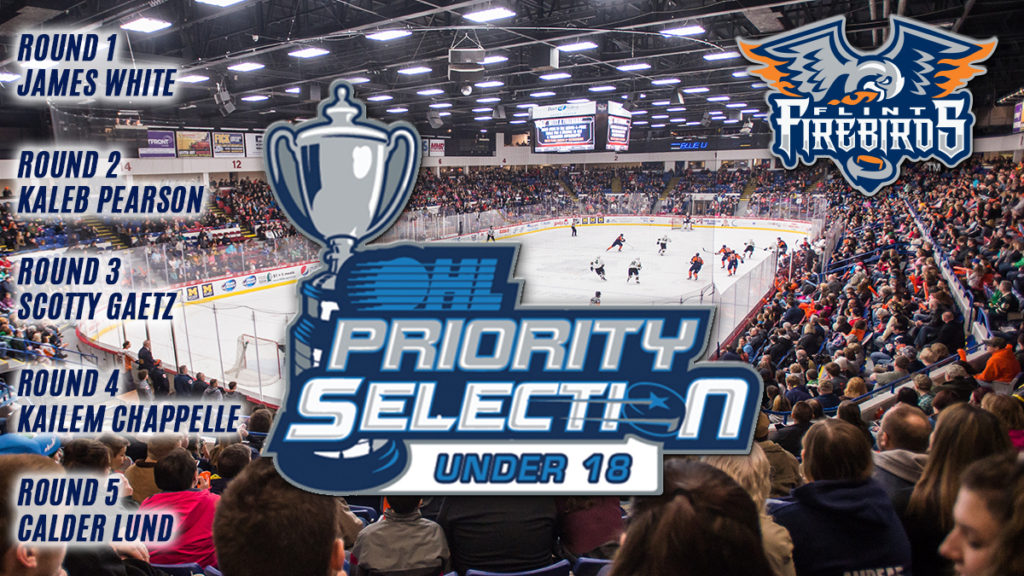 Flint, Mich – The Flint Firebirds Hockey Club selected five players in the 2017 Under-18 OHL Priority Selection tonight, Wednesday, Apr. 12. Of the five new faces added to the Firebirds’ organization, there were two forwards, two defenseman and one goaltender selected.

“This was an opportunity to continue to add more and more depth to our program and we’re excited about the group of kids that have been added to the organization,” said Flint Firebirds General Manager George Burnett. “In the last few days, we’ve been able to add 21 players to our club and we would expect everyone of them to have great summers improving their strength and fitness. The more difficult those decisions are in the future, the better we’re going to be.”

“I was really happy and excited to see I was drafted by the Flint Firebirds,” said White. “It means everything to be drafted in the OHL, it’s what I‘ve wanted since I was a kid. It’s exciting and an honor to get this chance.”

White, a 2000 birth-year, also played one game with the Lindsay Muskies (Jr. A) last season in the Ontario Junior Hockey League (OJHL).

“This was a successful draft for our club,” said Flint Firebirds Assistant General Manager and Director of Player Development Joe Stefan. “We built depth in all positions and look forward to these young men coming in at camp and competing for a job this year.”

Right-winger, Kaleb Pearson was selected in the second-round, 29th overall by Flint. He recorded more than a point-per-game, tallying 38 points (28G, 10A) in 35 games, including 48 penalty minutes with the Huron Perth Lakers. Pearson also notched 12 points (8G, 4A) in nine playoff games.

“I was really excited, it was a dream come true for me,” said Pearson. “It’s probably the best day of my life. The OHL is one of the best junior leagues in the world and it has always been a goal of mine to get there.”

Scott Gaetz was picked in the third-round, 49th overall. A defenseman and native of Oakville, Ont., Gaetz recorded 42 points (13G, 29A) in 61 games played with the Toronto Marlboros AAA Hockey Club, including an impressive plus-42 rating.

“I couldn’t believe it. I was just looking down at my computer screen and it froze for a second,” said Gaetz. “It popped up and showed my name and I screamed to my dad. I’ve dreamt of this my whole life, it was really, really, exciting.”

The 1999 birth-year, Gaetz, also played one game with the Toronto Patriots in the OJHL.

The Firebirds selected Kailem Chappelle in the fourth-round, 69th overall. Chappelle, a 5-foot-11 goaltender, had a 3.22 goals against average (GAA) in 22 games played with the Cambridge Hawks AAA Hockey Club.

“It’s just fantastic, just a great feeling, indescribable,” said Chappelle. “I’ve heard nothing but good things about the Flint Firebirds’ organization. I’ve been classmates with Drayton Duckett (Firebirds’ 2015 OHL Draft pick) and he said he’s really happy with the organization and the facilities. Just to be drafted in the OHL is everything. To be finally selected, I don’t know, it just means a lot.”

The Firebirds selected 1999 birth-year Calder Lund in the fifth-round, 89th overall. A 5-foot-10 defenseman from Toronto, Ont., Lund played his youth hockey with the Mississauga Rebels AAA Hockey Club last season, who are slated to compete for the Telus Cup next week, Canada’s National Midget Ice Hockey Championship. Lund was on the ice with his team for practice during the draft and was not available for comment at the time of this release.