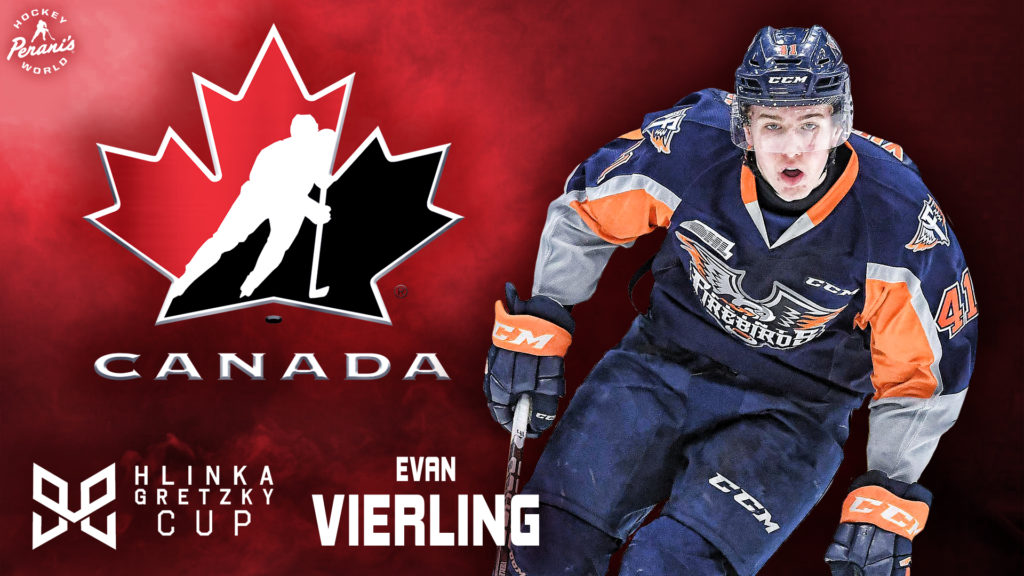 CALGARY, Alta. – Flint Firebirds forward Evan Vierling (#16 Team White) is among just 44 of Canada’s top under-18 hockey players, including 16 from the Ontario Hockey League, that have been invited to attend Canada’s National Men’s Summer Under-18 Team selection camp, set for July 26-30 at the Markin MacPhail Centre at WinSport’s Canada Olympic Park in Calgary.

The players, including four goaltenders, 14 defensemen and 26 forwards, will compete for a chance to represent Canada in one of the only true, best-on-best competitions for this age group at the prestigious 2019 Hlinka Gretzky Cup August 5th-10th in Breclav, Czech Republic, and Piestany, Slovakia. Canada has won gold 22 times in 28 years of summer under-18 competition, along with two silver medals and one bronze.

“This is another big step in Evan’s hockey career,” said Flint Firebirds Vice President of Hockey Operations and General Manager Barclay Branch. “We’d like to congratulate Evan and his family on this achievement and wish him success at camp.”

Vierling, a native of Aurora, Ont., was selected by the Firebirds in the first-round (2nd overall) of the 2018 OHL Draft. This season, he set a Firebirds’ record as a true-rookie recording 27 points in (6G, 21A) in 60 games for Flint in his first season in the OHL. Vierling recorded nine points in his last six games and was nominated as Flint’s ‘Rookie of the Year’ at the Firebirds’ end-of-season awards banquet.

The 16 OHL players are part of a larger group of 41 from across the Canadian Hockey League, a figure that also includes 16 from the Western Hockey League and nine from the Quebec Major Junior Hockey League.

In 2018, the tournament was rebranded from the Ivan Hlinka Memorial Tournament to the Hlinka Gretzky Cup and hosted in Canada, with Edmonton and Red Deer, Alta., serving as co-hosts. Canada captured gold on home ice, defeating Sweden 6-2 in the gold medal game with a team that included 14 players who were selected in the 2019 NHL Draft last weekend.

For more information on Hockey Canada, Canada’s National Men’s Summer Under-18 Team and the 2019 Hlinka Gretzky Cup, please visit HockeyCanada.ca, or follow through social media on Facebook, Twitter and Twitter.com/HC_Men.