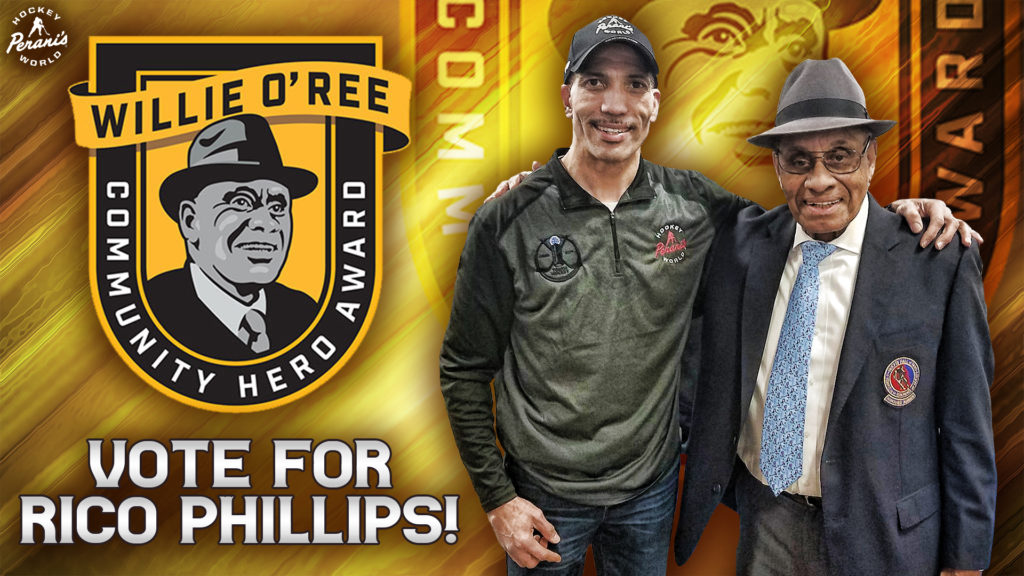 NEW YORK (April 28, 2019) – Anthony Benavides (Clark Park Coalition), Tammi Lynch (Players Against Hate) and Rico Phillips (Flint Inner City Youth Hockey Program) are the three finalists for the 2018-19 Willie O’Ree Community Hero Award, given “to an individual who – through the game of hockey – has positively impacted his or her community, culture or society,” the National Hockey League announced today.

Fans submit candidates for the Willie O’Ree Community Hero Award, with Willie O’Ree – in consultation with the NHL – narrowing the field to three finalists. The public then votes for the ultimate winner, who will be revealed Wednesday, June 19, during the 2019 NHL Awards™ presented by Bridgestone at Mandalay Bay Resort and Casino in Las Vegas. Voting begins today and runs through Sunday, May 5. Fans can vote and learn more about each finalist at NHL.com/OReeAward.

Following are the finalists for the Willie O’Ree Community Hero Award:

Rico Phillips, Flint Inner City Youth Hockey Program
Phillips serves as director of the Flint Inner City Youth Hockey Program (FICYHP), based in Flint, Mich. Phillips, who grew up in the city, was determined to make his community a better and more welcoming place. He began that mission by achieving his lifelong dream of becoming a professional firefighter, serving his hometown. In 2010, Phillips created FICYHP to provide a free introduction to hockey for children who otherwise would not have the opportunity to play the sport. Its mentors, including Phillips, are committed to teaching life skills – such as sportsmanship, character and cultural diversity – through the game. FICYHP’s most recent nine-week course wrapped up in March, highlighted by a visit from O’Ree – who witnessed firsthand the growth and development of each participant.

Anthony Benavides, Clark Park Coalition
Benavides serves as director of Detroit’s Clark Park Coalition, where he began a hockey program in 1993. The coalition repaired the defunct ice rink at Clark Park while developing a free youth hockey opportunity for children in a multi-cultural community plagued with crime and economic disparities. Benavides and the Clark Park Coalition now outfit participants with new and donated skates as well as free hockey equipment. In the past year alone, Benavides – who grew up three blocks from Clark Park and learned to skate there as a child – has operated a hockey program featuring a ‘Learn to Skate’ course and girls’ team while growing participation by more than 60 kids. Clark Park Coalition youth hockey players also attended the Willie O’Ree Skills Weekend in Philadelphia; played in a mini-tournament with Hockey Is For Everyone teams from Columbus and Detroit; and skated with the gold medal-winning U.S. Olympic women’s ice hockey team.

Tammi Lynch, Players Against Hate
Lynch co-founded Players Against Hate – along with Divyne Apollon Sr. – “to increase awareness and stop racism and name-calling by youth athletes, their teams and coaches, their families, and spectators.” Lynch, who also is a special education teacher, started the movement after one of her son’s hockey teammates was the victim of racial slurs and taunts. What began as a local effort in the Baltimore/Washington, D.C., area has blossomed into an international platform involving helmet stickers, buttons, and the support of NHL players and their families. Among its goals, Players Against Hate aims to develop educational materials for hockey players, coaches, officials, organizations and spectators; to sponsor scholarships in support of minority athletes; and to expand beyond hockey to other youth sports where hate impacts participants.

History
The Willie O’Ree Community Hero Award honors former NHL forward Willie O’Ree, who on Jan. 18, 1958, became the first black player to compete in the League. O’Ree, who lost sight in his right eye at a young age, went on to play professional hockey for 21 years. His perseverance is unrivaled, and his impact on the game and the lives of young players still is felt today. For more than two decades, O’Ree has served as the NHL’s Diversity Ambassador, traveling across North America to schools and hockey programs to share his story and experiences as well as to promote messages of inclusion, dedication and confidence. O’Ree has used hockey as a platform to build character and teach life skills, and has used his influence to foster positive values through the sport.

Tickets to the 2019 NHL Awards™ presented by Bridgestone are on sale to the general public at www.nhl.com/awardstickets. This ticket opportunity is available on a first-come, first-served basis, while supplies last.

This will be the 11th year of a successful partnership between Las Vegas and the League and the 10th time that the NHL will honor the best hockey players in the world and the top performances of the season in Las Vegas. Prior Las Vegas venues that have hosted the NHL Awards™ include Palms Hotel (2009-11); Encore at Wynn Las Vegas (2012 and 2014); MGM Grand Garden Arena (2015); The Joint, Hard Rock Hotel & Casino (2016 and 2018); and T‑Mobile Arena (2017).

A full lineup of presenters and entertainment will be announced at a future date. Fans can tweet about the event using the official hashtag #NHLAwards.