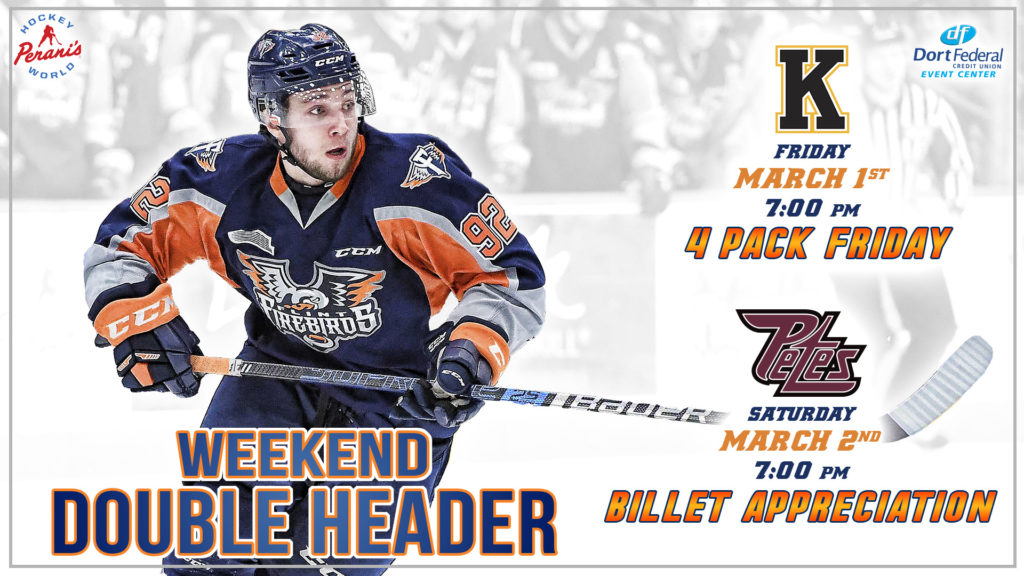 Flint, Mich. – The Firebirds return home to the Dort Federal Credit Union Event Center for a pair of games beginning this Friday, Mar. 1 and Saturday, Mar. 2. Puck drop is set for 7 p.m. (ET) both nights.

Friday, the Firebirds host the Kingston Frontenacs for the final ‘4 Pack Friday’ of the season, featuring (4) tickets, (4) hot dogs and (4) soft drinks, starting at just $60.

Saturday, Flint welcomes the Peterborough Petes for Billet / Host Family Appreciation Night. The Firebirds’ host families will be recognized and honored by for their commitment to the organization with a pre-game ceremony and will be provided a beautiful display of bouquets. Bouquet arrangements are courtesy of Bentley Florist and the Bovan Floral Group in Burton. The players come to Flint from all over the world, near and far, from Detroit and Florida to Toronto and Ottawa, Ontario, and Minsk, Belarus. Host families provide the Firebirds with with amazing support and accommodations all season long.

Saturday is also Girl Scout Night! Girl Scout cookies will be on sale after the game in the Dort Federal Event Center lobby. All 50-50 proceeds will benefit Girl Scouts of the United States of America. Additionally, Girl Scouts can receive the official Firebirds’ scout patch if they book as a group through Firebirds’ account executive John Notter. John can be contacted via email at john@flintfirebirds.com or by calling (810) 744-0580 ext. 207.

About The Flint Firebirds:
The Flint Firebirds are a proud member of the prestigious 20-team Ontario Hockey League. The OHL is one of three ‘Major Junior’ leagues that make up the Canadian Hockey League (CHL), which is known as the world’s premiere player development league for the NHL. On NHL opening day rosters in October, 70% of the players were CHL alums. Since the Firebirds’ inception four seasons ago, the team has produced 15 NHL signed or drafted players. The Firebirds average nearly 3,000 fans per game at the Dort Federal Credit Union Event Center, reaching over 100,000 fans each OHL season.