Western Conference Finals Comes Down to Game 7 in Windsor Wednesday 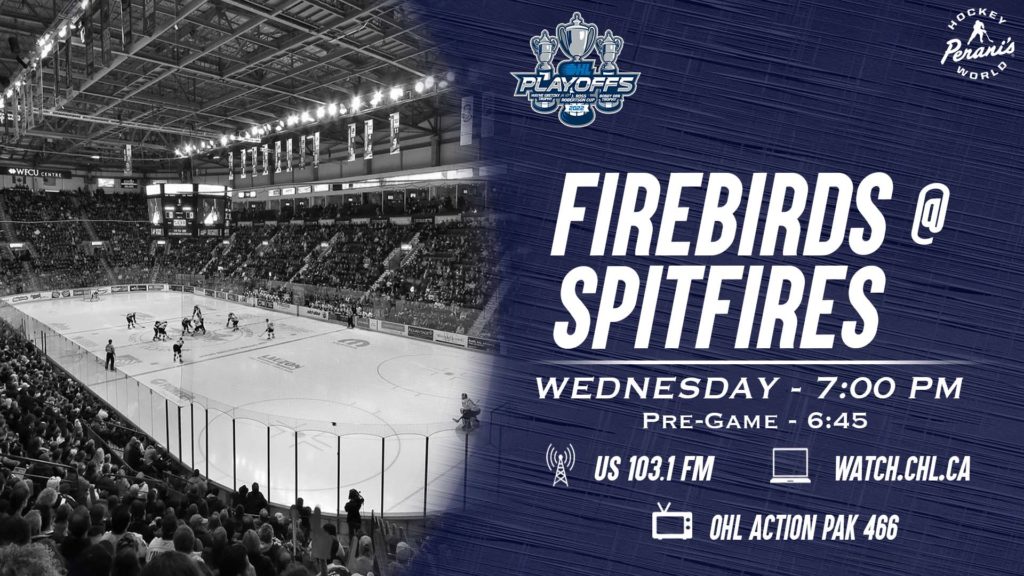 Windsor, Ont. – The Firebirds fell 3-2 in an overtime heartbreaker on Tuesday in Flint. With the victory, the Spitfires evened the Western Conference Finals at 3-3. The decisive Game 7 will be played at the WFCU Centre in Windsor. Puck drop for Game 7 is set for 7:05 p.m. (ET). Wednesday evening.

The clubs split Games 1 and 2 in Windsor, before shifting to Flint and splitting Games 3 and 4. The Birds went on to win Game 5 in Windsor before the Spits came to Flint and stole Game 6 in overtime. In the six games between these clubs in the Western Conference Finals so far, Brennan Othmann (New York Rangers) leads the team with seven points (1 G, 6 A), followed by Amadeus Lombardi with six (3 G, 2 A). Leading the way for the Spitfires are Wyatt Johnston (Dallas Stars) with three goals and four assists, and Will Cuylle (New York Rangers) with four goals and three assists.

The Firebirds rank third of the four teams who advanced to the Conference Semifinals with a 19.5% conversion rate on the power play. The Spitfires rank fourth at 14.7%. Flint had the league’s best penalty kill in the 68-game regular season, and now rank second of the four semifinalists with an 83.0% kill rate. Windsor ranks third, killing penalties at a 79.4% clip.

Through 18 playoff games to date, the Firebirds are led by Brennan Othmann (New York Rangers) with nine goals and 15 assists for 24 points. Othmann led his troops with 50 goals and 97 total points in the regular season. He currently leads the playoffs with five game-winning tallies, is second in assists and third in points. Amadeus Lombardi ranks second on the club with 15 points (7 G, 8 A). Lombardi also finished second in the regular season, with 59 points (18 G, 41 A) in 67 games. Rookie Gavin Hayes ranks third with 13 points (5 G, 8 A). Hayes has the most points of any rookie in the postseason, and he ranks second in goals and assists.

Fellow rookie Coulson Pitre has six goals and three helpers in 15 playoff games. No rookie in the league has lit the lamp more than Pitre. Flint’s defensive unit is led by Winnipeg Jets’ prospect Dmitry Kuzmin, who has assisted on 12 goals in the postseason. No defenseman in the OHL has assisted on more playoff goals, and he’s tied for the most points with Perrott and Henault from Windsor.

Between the pipes, Luke Cavallin has the second-best save percentage (SV%) of goaltenders in the playoffs at a .928. He has 11 wins in 18 postseason appearances and sports the third-best goals-against average (GAA) of teams in Round 3 at 2.68. He earned the most wins in the league and the most in Flint history during the regular season, ending at 36 victories during the campaign. Nathaniel Day made a brief appearance at the end of Game 2 in Windsor, making five saves on seven shots.

The Spitfires are led by Wyatt Johnston (Dallas Stars), who recorded the most regular-season points (124) in the OHL. Through 17 playoff games this year, he’s scored 11 times and assisted on 19 tallies for 30 total points. He ranks first in the postseason for assists and points and sits tied for second in goals. New York Rangers’ prospect Will Cuylle is second on the club with 21 points (10 G, 11 A). He’s tied for third in playoff goals.  Overage forward Daniel D’Amico ranks third on the club after scoring twice in Flint last night, now with six goals and seven assists.

Rearguards Louka Henault (3 G, 9 A) and Andrew Perrott (6 G, 6 A) are tied for fourth in total points with 12. They’re tied with Flint’s Kuzmin for the lead in playoff points among all active defensemen. Perrott also has the most goals-scored from the blue line in the postseason to date. Livonia, Mich. native Ryan Abraham tops the newcomers for the Spitfires, now with 10 points (3 G, 7 A). Abraham is tied second to Flint’s Gavin Hayes in the postseason for both assists and points among rookies.

Goaltender Mathias Onuska started his season with the London Knights before joining the Spitfires. He appeared in 26 regular-season games for the Spits, earning 19 victories with a 3.34 goals-against average (GAA) and a save percentage (SV%) of .882. He’s played in 16 playoff games for the club to date, winning 10 while posting a GAA of 2.66 and a .904 SV%. Detroit, Mich. native Xavier Medina played in 30 regular-season contests for Windsor this season, picking up 18 wins for the team. He posted a 3.05 GAA and a .891 SV%. Medina played his first full game in the playoffs on Tuesday, earning the victory to force Game 7. He sports a 1.57 GAA and a .932 SV%.

Wednesday’s contest against the Windsor Spitfires can be heard live on the radio throughout Flint & Mid-Michigan on US 103.1 FM, online at www.us103.com, or by downloading the US 103 app here. Jack Sznewajs will call the play-by-play action on the Firebirds Hockey Network (FHN). Pregame coverage will begin prior to puck drop at 6:50 p.m. (ET) Wednesday evening.

Also, all Flint Firebirds home and away playoff games can be watched anywhere in the world online at https://watch.chl.ca/ohl. CHL TV is the league’s new and improved video streaming platform that delivers high-quality live and on-demand coverage of all regular season and playoff games annually. The cost is $6.99 for 24-hour access or $59.99 to watch all of the 2022 OHL playoffs.

Next Up: If the Firebirds win the Western Conference Finals and advance to the OHL Finals, Game 1 is scheduled for Friday night in Hamilton. Flint will play Games 3, 4 and 6 (if necessary) at home. Follow flintfirebirds.com and the team’s account on social media platforms for the official schedule and ticket information. Tickets for future games would be available through ETIX HERE, in person at the Dort Financial Center Box Office, or by calling 1-800-514-3849.