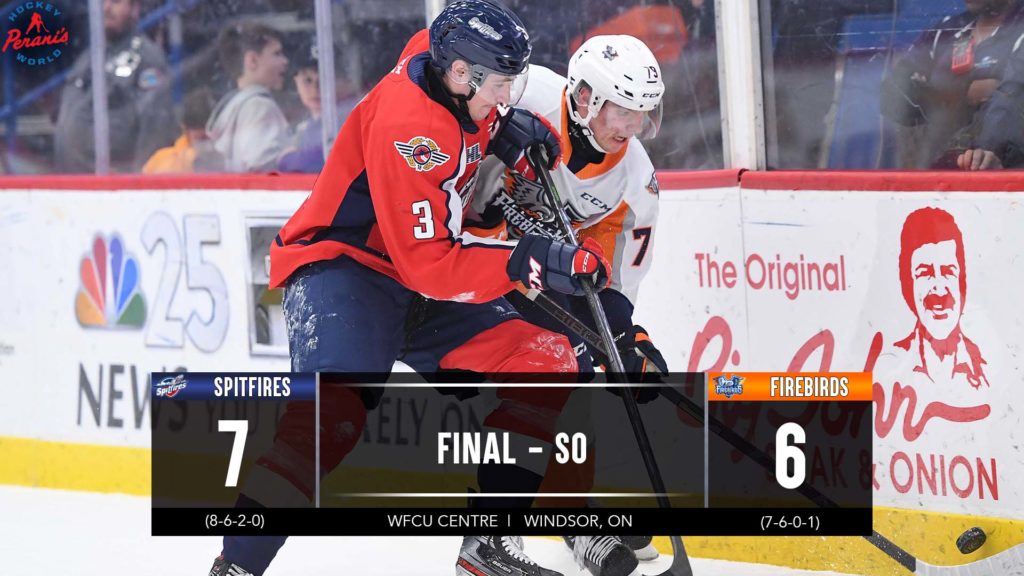 Windsor, Ont. – The Firebirds took an early lead but saw the Spitfires battle back to force an eventual shootout and claim back-to-back victories this weekend. Matt Tovell got his second career start after posting a shutout in Flint Saturday night but was replaced by Kyle Downey after allowing six goals. Downey made all nine saves asked of him while his team rallied back and reclaimed the game. Brennan Othmann (New York Rangers) and Will Cuylle (New York Rangers) stole the show, each recording a hat trick. Tag Bertuzzi for Flint and Kyle McDonald for Windsor scored twice each in the affair, and Amadeus Lombardi and Wyatt Johnston (Dallas Stars) also lit the lamp. Luke Cavallin made 35 saves on 41 shots in the contest.

Flint finally put one past Matt Tovell in the young netminders’ 67th minute of play over the past 24 hours. Seconds after Flint’s power play expired, Tristan Bertucci passed from the point to Braeden Kressler (Toronto Maple Leafs) on the left side of the offensive zone. Kressler carried across the top of the circles from left to right, shaking a pair of defenders in the process. Just inside the right circle, Kressler sent a wrist shot into traffic. Tovell made the save, but the rebound went directly to Brennan Othmann to the goalie’s right for the quick one-timer. Othmann’s team-leading 11th of the season was logged at 7:36 of the opening frame.

The Spits continued their trend of outshooting the Birds, leading 16-12 after the opening 20 minutes. Windsor also won 15 of 25 first-period draws. On special teams, the Firebirds were 0-for-1 with the man-advantage, and they went 2-for-2 on the penalty kill.

The teams combined for eight second-period goals. First, the other New York Rangers’ prospect on the ice found twine to even the score after Othmann’s first-period marker. Wyatt Johnston flipped a backhand pass from the left-wing boards to Will Cuylle at the left faceoff dot. Cuylle put the puck in the top left corner of the goal with precision for his 11th of the season at 1:40 of the second period.

The Birds answered back quickly, with Othmann getting his second of the night at 1:55 on the power play. Tyler Deline made a nice cross-ice pass from atop the left circle to Othmann in the right circle. Othmann sniped a wrister past Tovell for his 12th of the season, assisted by Deline and Riley Piercey. Othmann then completed the natural hat trick at 4:28 of the second period, once again with the man-advantage. This time it was Sahil Panwar that made the cross-ice pass to Othmann, who was again perched near the right-wing faceoff dot. This time Othmann made a quick snapshot to the far side of the net, with the assists from Panwar and Tyler Deline.

Flint claimed the 4-1 lead at 6:56 of the middle frame on a deflection in front of Tovell. Young rearguard Tristan Bertucci launched a howitzer from the left point into traffic. With a video replay required to see how the puck made it past Tovell, it was Tag Bertuzzi credited with the tally. Bertucci’s shot was rising toward the crossbar and Bertuzzi knocked it down to ice level before it crossed the goal line. Bertuzzi’s second marker of the season was assisted by Bertucci and Panwar.

The Firebirds’ lead climbed to four off the stick of Tag Bertuzzi, scoring his second of the night at 12:49. Dmitry Kuzmin (Winnipeg Jets) dropped the puck behind the Windsor cage for Bertuzzi. The son of legendary NHL’er Todd Bertuzzi grabbed the puck off the end boards, and with a defender in tow made a backhanded wraparound that found its way through the five-hole and past the goal line for his third of the season.

Then Cuylle netted his second of the night at 14:23 while on the power play. Wyatt Johnston cycled the puck from the left-wing boards to Louka Henault centered high inside the blue line. Henault’s hefty slapper went wide to the right, but took a lively bounce off the boards behind Cavallin and slid back into the blue paint to the netminder’s left. Cuylle was in the right place to one-time the puck behind Cavallin for his 12th of the campaign.

Amadeus Lombardi scored his fourth of the season, unassisted at 16:22. He emerged on a two-on-one breakaway up the left side of the offensive zone with Othmann along to his right. While he looked as though he was going to pass, he lost the commitment of the defender and roofed a wrister near-side. Tovell was replaced by Kyle Downey between the pipes at the 36:22 point of the game.

The eighth and final goal of the wild second period came from a wide-open Wyatt Johnston with 14 seconds left on the clock. Johnston skated between the circles and delayed just enough to create an opportunity for a quick snapper that found twine for his ninth of the year, assisted by Kyle McDonald.

Flint held the edge in shots in the second period 13-9.

Cuylle potted his third of the game in the third period on a deflection while on the power play. Henault tee’d up and fired a slapper from just inside his blue line. The goal light went on and the initial impression was that it was Johnston’s goal. The replay showed, however, that Cuylle tipped the shot in the slot to complete the hat trick at 4:54. Johnston picked up the second helper on the goal.

Windsor then pulled within one at 7:56 of the third. Pasquale Zito (Detroit Red Wings) won an offensive zone faceoff back to his defender at the right point. The ensuing slapper was knocked aside by a diving Cavallin, onto the stick of McDonald at the inner edge of the left circle. McDonald corralled the puck and made the spin-o-rama move as he lifted a short-range wrist shot over Cavallin before he could recover for his ninth of the campaign. Flint would use its one timeout to regroup after the McDonald goal.

With under five minutes left in regulation, McDonald used his defender as a screen to snap the puck just inside the near post from the right circle and tie the contest at six. It was McDonald’s tenth of the season, logged at 15:49 and assisted by Nicholas DeAngelis and Daniel D’Amico. With three straight in the third period, the Spitfires forced overtime.

During the five minutes of three-on-three play, there were scoring chances and great saves at both ends of the ice, but no goal to settle the tie. The shootout went as follows:

FLNT – Downey save on Giroux

FLNT – Downey save on Othmann

The Spitfires finished with a 41-33 edge on the shot clock. Flint held the edge in faceoffs for the second straight night 46-41. Both teams scored two power-play goals, Flint in five opportunities and Windsor in six.